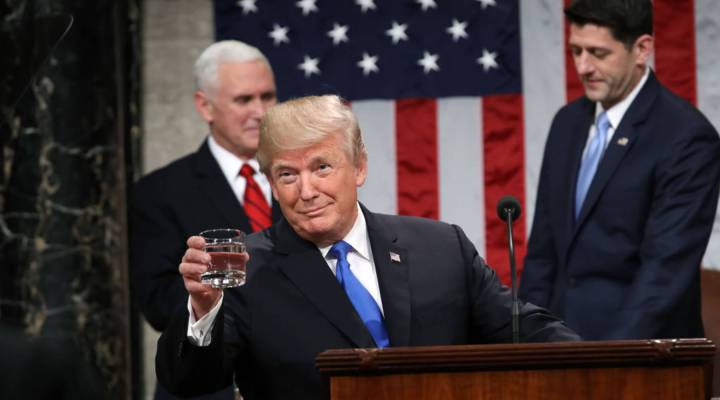 President Donald Trump holds a glass of water before he delivers the State of the Union address. Win McNamee/Getty Images

President Donald Trump holds a glass of water before he delivers the State of the Union address. Win McNamee/Getty Images

When he delivered his first State of the Union speech on Tuesday, President Donald Trump pointed to growing wages as a sign of the strong state of the U.S. economy. However, while we are finally starting to see some signs that wages are going up, many workers are still not seeing the effect on their paychecks.

Average hourly earnings are up 2.9 percent from this time last year while wages and salaries in the private sector are up 2.8 percent, according to the Department of Labor. However, wages would have to grow at a rate somewhere between 3 to 4 percent in order for low-income Americans to actually feel the impact on their everyday life. Former labor secretary Tom Perez, who served under President Barack Obama, often said that wages were “the unfinished business of this recovery.” That much is still true today — a year into Trump’s presidency.

During the Great Recession, wage growth dropped from above 3 percent to below 2 percent for most of 2010 and the beginning of 2011. Now, a decade later, it still remains below 3 percent.

Throughout the recovery, as the unemployment rate fell, economists expected — and continue to expect — that wages will go up.

“Generally speaking as the labor market tightens I think everyone expects to see upward pressure on wages and benefits,” said Kristen Monaco, the associate commissioner for compensation at the Bureau of Labor Statistics.

This is basically what we should be seeing now. On Friday, the Department of Labor announced that the unemployment rate in January remained unchanged at 4.1 percent — down from 4.8 percent a year ago. As a result, there is more competition for fewer available workers so wages should be going up.

But, when adjusted for inflation, wages have not actually grown that much.

“Real wage growth, after we adjust for inflation, has been slowing down again in 2016 and 2017,” said Jay Shambaugh, director of The Hamilton Project at the Brookings Institution and former member of President Obama’s White House Council of Economic Advisers. “2017 in particular was actually a pretty weak year for real wage growth. Part of that is that in 2014 and 2015, inflation was pretty low and so even this kind of middling nominal wage growth still gave you a decent real wage growth. But now that inflation has climbed at least a little bit back up, we still have the same sluggish wage growth.”

Meaning, that even if wage growth is picking up it is canceled out by inflation when it comes to real wages.

However, some areas in the U.S. are seeing higher wage growth than others.

“Some areas have wage growth that is speeding up and others don’t,” explained Cathy Barrera, chief economist at ZipRecruiter. “In particular, there’s certain places in the United States that have the lowest unemployment rate — so ones that are having a very tight, very competitive labor market — that are seeing their wage growth pick up. So, in some sense, yes, wage growth rates are picking up. You can see it in certain locations. We haven’t yet seen it in the national number.”

There’s also the issue of worker mobility and the tight housing supply. If you can’t move easily, you are stuck with the wages where you live. And if there’s only one or two employers with your kind of job in your area then wages really get stuck.

“This is a concept called monopsony, which is the labor market equivalent of monopoly,” explained Kate Bahn, economist at the Center for American Progress. “A classic example in economics is like a coal mining town where workers cannot actually go find another employer. There is only one employer within their hometown.”

And that one employer can keep wages low, if they want. According to Bahn, with lots of consolidation in sectors like health care and retail, even a worker shortage may not be enough to push wages up quickly.

“For all the rosy numbers one could see in the economy, at the end of the day what people care about — or at least most workers care about — is their paycheck and that’s the thing that’s not really moving much,” added Shambaugh.