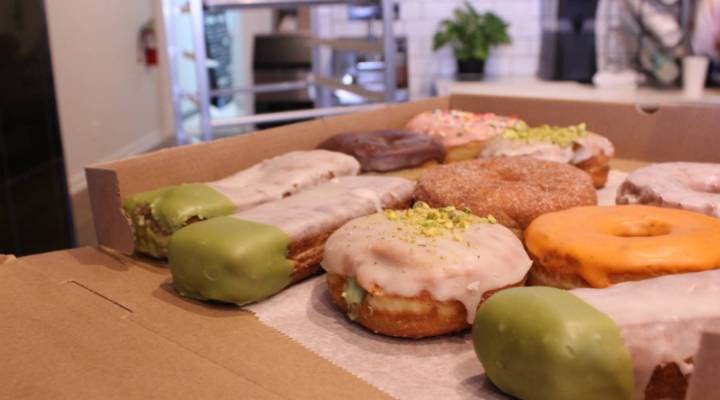 COPY
A box of Dottie's Donuts in Philadelphia, where no more Boston Creme donuts will be made until after the Super Bowl. Emma Jacobs/ for Marketplace

A box of Dottie's Donuts in Philadelphia, where no more Boston Creme donuts will be made until after the Super Bowl. Emma Jacobs/ for Marketplace
Listen Now

Around 5 a.m. the morning after the Eagles won the NFC Championship, Dottie’s Donuts in Philadelphia decided it would not make one of its top sellers: the Boston Creme.

On Sunday, the New England Patriots will go up against the Philadelphia Eagles in the Super Bowl in Minneapolis. Businesses in both their home towns have identified a business opportunity: taking their rival cities’ products off their shelves or, in some cases, replacing them with tongue-in-cheek versions.

Dottie’s subsequently rolled out a vanilla and pistachio flavor called the “Creamed Boston.” These have been a hit, according to Susy Quin, who works behind the counter at one of Dottie’s shops.

“We’ve had people calling in being like I just want to order like three dozen of just the Creamed Bostons for Super Bowl Sunday,” Quin said, “but we’ve also been getting a lot of prank calls from Boston, Patriots fans.”

Dottie’s Donuts in Philadelphia has banned Boston Cremes until after the Super Bowl, part of the food wars sweeping both cities.

Kane’s Donuts in Massachusetts bet Dottie’s a dozen donuts on the outcome of the game.

“When the Pats win, we’re expecting to get a dozen of donuts over here,” co-owner Paul Delios said in a video posted on Twitter. Dottie’s has accepted the bet. Meanwhile, another Boston bakery replaced Philadelphia Cream Cheese in its cheesecakes and as its bagel spread, with a brand shipped from Wisconsin. Back in Philadelphia, restaurants from the Boston Market chain covered up the “Boston” on marquees and an iconic cheesesteak spot, Pat’s, has a new banner temporarily re-naming itself  “Eagles.”

Americus Reed teaches marketing at the University of Pennsylvania’s Wharton School. He says whether a business is offering Super Bowl specials or banning products, it all amounts to basically the same thing.

“It’s an opportunity to bask in the reflective glory of the team,” he said, and to “express my sense of community.”

Reed said the benefits for businesses can last a long time, even if the hometown team loses. “It might,” he suggested, “actually go in the reverse, kind of support this business even more because they stuck with the team.”

Dottie’s Donuts introduced one more Super Bowl flavor: The greased pole. That’s named for the light poles Philadelphia police covered with Crisco before the championship game to prevent fans from climbing them. (Eagles fans managed to climb them anyway.) The pole-shaped donuts, fried in vegetable oil, have quickly become one of Dottie’s top sellers.