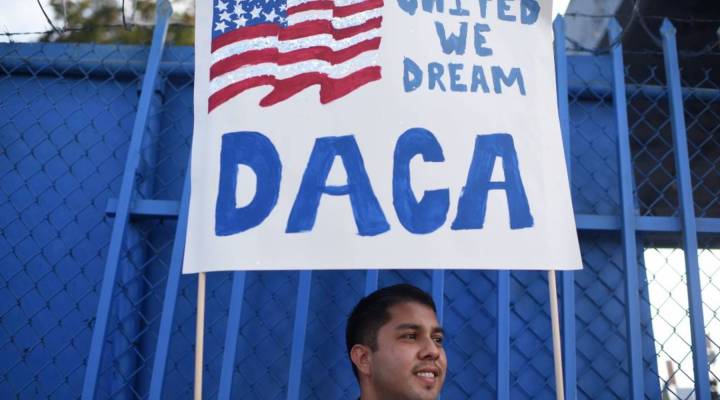 On Tuesday night, President Donald Trump used his State of the Union speech to lay out his immigration plan. The four pillars of his plan include a path to citizenship for 1.8 million Dreamers brought to the U.S. by their parents, securing the U.S. borders, ending the visa lottery and ending “chain migration” by limiting sponsorship to just immediate family members.

Trump’s immigration reform proposal comes at the time when the two parties are struggling to find a compromise on the issue. Back in September of last year, Trump ended DACA, the Deferred Action for Childhood Arrivals program implemented under Obama that protected young undocumented immigrants brought here by their parents from deportation and provided them with work permits that had to be renewed every two years. The program is set to be phased out in March, but the timing might change due to a pending court case in California. President Trump has encouraged the U.S. Congress to use the six months between the announcement and March to come up with a compromise.

However, Republicans and Democrats have struggled to do so, most recently causing the U.S. government to shut down for three days as a result. With the deadline fast approaching, both DACA recipients and their employers are trying to prepare for what comes next if Congress fails to come up with a solution.

When the Trump administration first announced its decision to end DACA, pro-immigration groups FWD.us and the Center for American Progress issued a report noting that as many as 700,000 DACA recipients were legally employed at the time. If DACA were to end, an average of 30,383 recipients would see their work authorization expire every month. This means they would no longer be able to work in the U.S.

With DACA work permits expiring, employers find themselves in a difficult place. They cannot discriminate against employees based on immigration status while they have proper paperwork but also then cannot keep them employed once their permits have expired.

“They need to do workforce planning around positions that may be vacated, with the rights of employees and prospective employees not to be discriminated against,” said Rebecca Peters, director of government affairs at the Council for Global Immigration.

“Employers should not be terminating employees or rejecting applicants merely in anticipation that they may lose their work authorization status at a future date. And they shouldn’t be making inquiries of specific individuals to determine if they are DACA recipients if they have not volunteered that information. So any employer really only needs to be looking at those DACA recipients that have stepped forward and self identified themselves,” Peters said.

But at the same time, employers have to be careful not to employ someone whose work authorization has expired.

“Under current law, employers face an array of penalties for violations of employment verification laws. These penalties can range from civil penalties from a couple hundred dollars to thousands of dollars in criminal penalties and debarment from receiving government contracts,” warned Peters.

The most important thing that employers can do at the moment is communicate with their employees and stay on top of the latest developments such as a potential deal in Congress or any updates on the California court case, in which a judge ruled that DACA protections should continue.

“Employers should be considering town hall meetings, hotlines for their workforce or other ways that employees can reach out to it to share their concerns voluntarily,” Peters advised. “This is where an employee assistance plan could provide helpful legal or or even emotional support for employees.”

The Council for Global Immigration remains hopeful that Congress will reach a compromise before March, but encourages all its members and employers to “really advocate for a timely bipartisan solution.”

However, businesses have long been lobbying for a compromise on immigration to no avail.

Days after Trump’s decision to repeal DACA became public, a coalition of executives from hundreds of companies including Apple, Facebook, Microsoft and Amazon called on Congress to come up with legislation that would allow Dreamers to remain and continue contributing to the U.S. economy.

“More than 97 percent are in school or in the workforce, 5 percent started their own business, 65 percent have purchased a vehicle, and 16 percent have purchased their first home,” the coalition pointed out in its letter. “At least 72 percent of the top 25 Fortune 500 companies count DACA recipients among their employees. Dreamers are vital to the future of our companies and our economy. With them, we grow and create jobs. They are part of why we will continue to have a global competitive advantage.”

According to Recode, Apple, Amazon, Facebook and Google spent a combined $50 million lobbying the U.S. government in 2017 on issues like immigration, net neutrality and taxes.

And while the immigration lobbying efforts seem to have fallen on deaf ears in the White House, “it’s important for them that when history is written they are on the record of the right side of that history,” according to Americus Reed, marketing professor at the Wharton School.