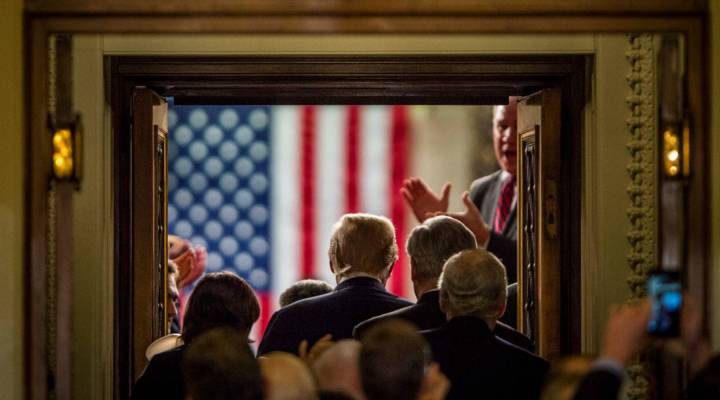 COPY
President Donald Trump enters the House of Representatives chamber to deliver his first State of the Union address before a joint session of Congress on Tuesday in Washington, D.C. Pete Marovich/Getty Images

President Donald Trump enters the House of Representatives chamber to deliver his first State of the Union address before a joint session of Congress on Tuesday in Washington, D.C. Pete Marovich/Getty Images
Listen Now

President Donald Trump made a lot of economic claims during his first State of the Union address Tuesday night. His points on regulation were not new, but they stuck out nonetheless.

“In our drive to make Washington accountable, we have eliminated more regulations in our first year than any administration in the history of our country,” Trump said.

We’ve spent the last several months studying regulation on our documentary podcast The Uncertain Hour, hosted by Krissy Clark. She talked to Amy Scott, giving some context around the White House’s drive to deregulate. The following is an edited transcript of their conversation.

Amy Scott: So first of all, that clip where Trump said he’s eliminated more regulations in his first year than any administration, is that true?

Krissy Clark: It’s such a simple sentence, right? But there is actually a lot packed into it that needs some unpacking. So first of all, the claim itself: The Trump administration is definitely in a deregulatory mood and has made efforts to undo some very significant regulations and net neutrality, some key regulations around greenhouse gas emissions. But it would actually be pretty difficult to measure how many regulations the president has eliminated compared to every other president in history. For one, a lot of the government records tracking that sort of thing only go back to 1995, so that wouldn’t even cover the Reagan and Carter administrations, which both went big on deregulation. And then when you look at the list that the White House issued recently, this list of 67  “deregulatory actions” that the Trump administration undertook in its first 11 months, just a few of them were deemed economically significant by the White House itself, and many of the actions on the list were actually underway before Trump took office. So that’s some things to keep in mind. But then there’s another thing I think that’s really important to point out about how President Trump talked about regulations last night. I want you to listen to something he said right after he made that claim.

Trump: In Detroit, I halted government mandates that crippled America’s great, beautiful auto workers so that we can get Motor City revving its engines again — and that’s what’s happening.

Scott: So those government mandates in Detroit, what exactly is he talking about there?

Clark: Well, that’s what’s kind of interesting is that he’s not specific about what he’s talking about there. And if you look at opinion polls about regulation for the last decade or so, in general Americans are about evenly split on whether regulation of business usually does more harm than good, or whether it’s necessary to protect the public interest. But when you ask people about specific types of regulations, there’s actually more consensus. For example, with environmental regulations, in most recent polls most Americans, almost 60 percent, say environmental regulations are worth the cost.

Scott: So you’re saying actually most Americans would be in favor of environmental regulation?

Clark: Right. And the specific government mandate that President Trump was likely talking about halting last night when he mentioned Detroit was an environmental regulation. He didn’t mention it by name, but last spring, Trump announced that his administration was going to reconsider the tighter fuel efficiency standards for cars that had been set in the waning days of the Obama administration.

Scott: And what about that argument President Trump made that these restrictions would have “crippled workers.

Clark: So, that’s a theme you hear a lot from him and many in Congress. There’s this common buzzword that people use: “job-killing regulations.” And I spoke to a professor at the University of Pennsylvania named Cary Coglianese who wrote a book investigating just that issue. It’s called “Does Regulation Kill Jobs?” and the answer is: not exactly. I mean, some regulations, like some technology or other changes in the world, will definitely mean certain companies will close down or lay off workers, and that will be really painful for those people who are affected. But that’s only looking at one side of the ledger.

Clark: And when you look at the jobs data overall, Cary Coglianese says the consensus among most economists is that there’s just not a good case that regulations mean fewer jobs across the economy.