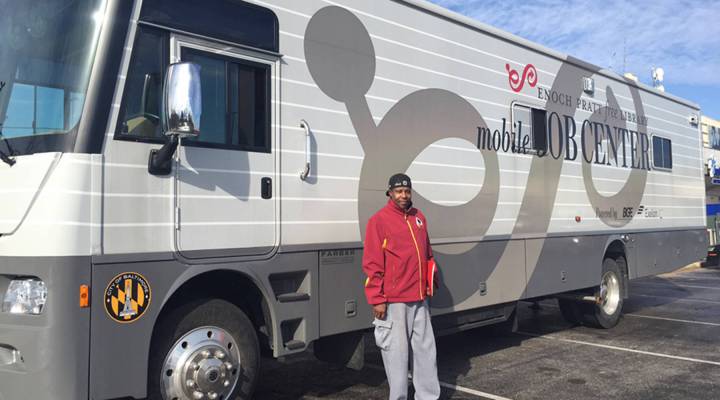 Adrian Henderson was out buying shoes for his daughter when he spotted a white RV in the mall parking lot marked “mobile job center.” It’s run by the public library — picture a bookmobile for jobs. Inside, there’s a bank of computers for printing resumes and applying for openings online.

Henderson, 49, lost his job in December and was looking for work in security.

“The market is certainly there,” he said. “But I guess sometimes it’s who you know and not what you know, so it’s just been tough for me right about now.”

Henderson is among the 6.8 percent of African Americans who are unemployed, according to the most recent data from the Labor Department. That’s the lowest level since the government began tracking in 1972. President Donald Trump has taken credit for the drop, even getting in a Twitter fight with Jay-Z over the issue.

“But if the country as a whole was at a 6.8 percent unemployment rate, we’d be talking about a recession,” said Dedrick Asante-Muhammad with the advocacy group Prosperity Now.

The numbers reflect a legacy of racial inequality, said Valerie Wilson, director of the Program on Race, Ethnicity and the Economy at the Economic Policy Institute. Research has shown persistent discrimination in hiring — and firing, she said.

“Even when we look at people with the same levels of education,” Wilson said, “we typically find that the black unemployment rate is really close to, if not higher than, double the white unemployment rate.”

“If you live in an impoverished community and few people in your neighborhood have a job, then your network has a lot of holes in it,” she said. “It’s more difficult to be aware of and get connected to job opportunities.”

There’s another common barrier for people growing up in poverty, said Joseph Jones, founder and CEO of the Center for Urban Families in Baltimore, which provides job and leadership training.

“When we think about minority males who’ve had some exposure to the criminal justice system, there are just certain segments of the labor market that they are not going to qualify for,” he said.

Baltimore’s mobile job center travels to distressed neighborhoods with high unemployment. About a thousand people stop by every month.

During his visit, Henderson pulled up a long resume on his phone and showed it to staffer Randy Chambers.

In a sign of the stronger market, Chambers printed out a stack of possible options — security guard positions paying up to $11 an hour. With his experience Henderson shouldn’t be out of work for long. The median duration of unemployment is down to nine weeks, overall. But for black workers it’s more than 13 weeks.