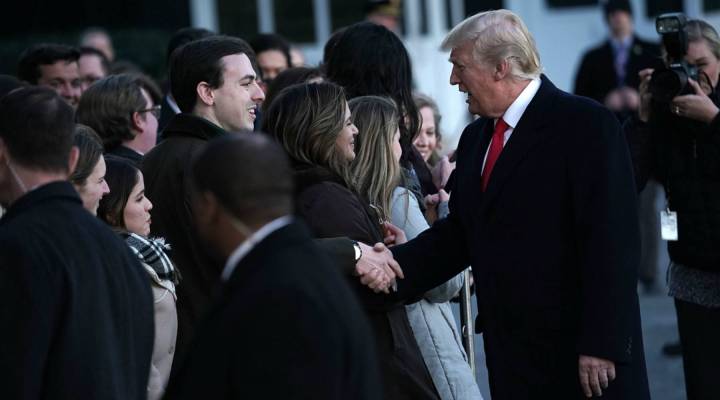 COPY
U.S. President Donald Trump greets visitors on the South Lawn after he returned to the White House on Jan. 17, 2018 in Washington, D.C. Alex Wong/Getty Images

The White House said President Trump’s first State of the Union address will focus on the administration’s accomplishments in Trump’s first year in office.

Among the wins Trump is set to highlight is the economy. But how much of the strong economy can really be attributed to an administration’s first year? Economists say the president’s regular tweets claiming responsibility for the booming stock market and low unemployment are a bit of a stretch.

“The state of the economy is naturally much more influenced by what happened before you became president,” said Alan Blinder, who was a member of President Clinton’s Council of Economic Advisors and is now an economics professor at Princeton.  He said that as a presidency progresses, and policies have time to take effect, that balance shifts.

For example, the low unemployment under the Trump administration is a continuation of a trend that goes back to 2009. Blinder said there is an argument to be made, though, for Trump having some influence on the stock market.

“I find it believable that when you get a president who tells the public and the business community that he’s going to cut their taxes … and he tells you he’s going to deregulate, drop all kinds of regulations, it’s quite a reasonable supposition to think that that pushes the stock market higher,” said Blinder.

Lee Branstetter, who served on President Obama’s Council of Economic Advisors, said there’s generally a built-in lag between new policies and their impact on the broader economy. Usually, around six months to a year after a major piece of legislation.

“The president really hasn’t had much time or much opportunity to implement policies that are significant enough and impactful enough to really move the needle in terms of economic growth,” said Branstetter, who is now a professor of Economics at Carnegie Mellon University.

Trump’s first major policy accomplishment was the new tax law, just passed last month. And though there have been some announcements of bonuses and companies bringing money back to the U.S., it’s still going to take a while for the effects of the law to filter through the broader economy.

Trump will likely use the State of the Union address as a chance to set the narrative that the continuation of positive news for the economy is due to his administration.  A recent Gallup poll found 56 percent of Americans credit Obama for the “improved U.S. economy,” compared to 49 percent who credit President Trump.