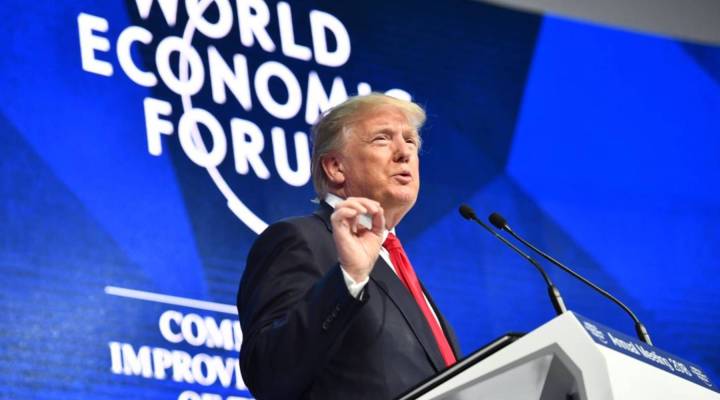 President Trump took an opportunity at the World Economic Forum in Davos, Switzerland — an annual gathering of the world’s business and political leaders — to tout America’s economic growth and make a sales pitch for investment opportunities here in the U.S.

He said the U.S. has created millions of new jobs since he was elected, the GOP tax bill will lower the tax rate for corporations and increase household incomes, and that the country is going to negotiate “mutually beneficial” trade agreements.

“We are creating an environment that attracts capital, invites investment, and rewards production,” Trump said. “America is the place to do business, so come to America where you can innovate, create and build.”

But how accurate are these statements? Let’s dive deeper into some of the economic themes he addressed.

The stock market isn’t the economy

Trump said the U.S. is experiencing “strong economic growth” after years of stagnation, using stock market records and consumer, business and manufacturing confidence levels to back him up.

Context: Yes, the Dow broke 26,000 points for the first time in its 120-year history almost two weeks ago. Which can be great, for example, for those who are stashing retirement savings in vehicles like 401(k)s. But ultimately, the stock market isn’t the economy. Not everyone is invested in it, and these stock record highs are actually making analysts nervous about interest rates.

These peaks don’t mean the market is going to crash when it reaches a certain valuation. But studies show that returns in upcoming years are usually weaker than they typically are when valuations are this high, according to Michael Regan, senior editor of markets at Bloomberg. ”And that often includes some nasty dips,” he added. “The dot-com bubble being the most prime example, I think, in most people’s memory.”

Trump said that since his election, the U.S. economy added 2.4 million jobs; unemployment claims reached their lowest point in almost half a century; and that African-American unemployment reached its lowest “ever recorded in the United States,” along with “unemployment among Hispanic-Americans.”

Context: Job gains throughout 2017 continued at a healthy rate, with U.S. employers adding 148,000 in December. But average job gains slowed to 171,000 this year from a peak of 250,000 in 2014 (which is what happens when unemployment falls to super low levels). The December jobs report also did reveal that African-American unemployment dropped to a record low of 6.8 percent, while the Hispanic unemployment rate was at a record low of 4.8 percent in October and November 2017.

Keep in mind that the white unemployment rate is at 3.7 percent, and jobs numbers don’t paint the whole picture. Wage growth has been stagnating — average hourly pay remains 1 percentage point below the 3.5 percent annual gain that usually happens in a healthy economy.

In his speech, Trump said the GOP tax overhaul would lower the corporate tax rate from 35 percent to 21 percent, leading to tax cut bonuses for millions of workers and an increase in the average American’s household income by over $4,000. He also pointed out that Apple plans to bring $245 billion back home.

Context: Reducing the corporate tax rate to 21 percent (and there’s a chance companies may end up even paying lower than that) was a centerpiece of the tax bill, with proponents arguing that U.S. companies will have more incentive to bring home profits stashed abroad. Companies like Apple, Citigroup and Nike have an estimated $2.6 trillion stockpiled overseas.

But some economists say that companies are likely to use potential tax savings for shareholder payouts, which is what happened when companies got a big tax break in 2004. As for that $4,000 figure, Trump’s Council of Economic Advisers came up with the number, but experts say that may be based on some shaky calculations. A report from the Congressional Budget Office, for instance, shows that workers carry about 25 percent of the corporate tax burden, while the CEA paper cites a report that says they carry 70 percent of it.

Trump mentioned that the U.S. wants to reform the international trading system “so that it promotes broadly shared prosperity and rewards those who play by the rules.” He said he’s for free trade as long as it’s “fair” and that the U.S. is prepared to negotiate bilateral trade agreements with all countries, including those in the Trans -Pacific Partnership.

Context: President Trump has repeatedly criticized free trade, promising on the campaign trail that he’d bring back jobs he thinks were lost to globalization. Back during his inauguration speech, he said, “We must protect our borders from the ravages of other countries making our products, stealing our companies and destroying our jobs.” But it’s hard to pin hard numbers to deals like the North American Free Trade Agreement.

The frustrating answer is that it does both. It kills some jobs and create other ones. As trade barriers go down, everyone competes, and some foreign companies will beat out American ones and vice versa. Plus, the threat of automation may be part of the blame. A report from McKinsey Global Institute released last January said that half of today’s work activities could be automated by 2055.