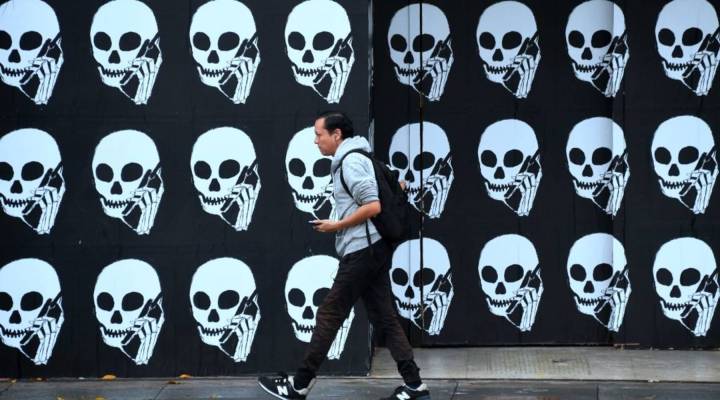 There used to be a thing in this economy called telemarketing: Companies call you, often at inconvenient times, to sell you something. In 2003, when they got out of hand, the National Do Not Call Registry was created to help police telemarketers. This worked for a while until robocallers, precorded calls that can be sent en masse from a computer with an internet connection, came to dominate the telecom landscape. The sheer scale and low cost of robocalls made the Do Not Call system a bit of a joke.

In an article for the Washington Post, Simon van Zuylen-Wood set out to find exactly why the Do Not Call registry isn’t working. Marketplace host Kai Ryssdal spoke to him about his reporting. The following is an edited transcript of their conversation.

Kai Ryssdal: I have a note here on my little yellow pad that I wrote down as I was reading this article, and it says, in all capital letters, talking about the Do Not Call list, “IT DOES NOTHING!” Explain why the Do Not Call list is really a little bit of a joke.

Simon van Zuylen-Wood: I think most people who are on the Do Not Call list, or are aware of the Do Not Call list, have this apprehension that once you put your number on it, there’s some technological wizardry or legal muscle that is going to prevent anyone from even calling you. That’s not true.

Ryssdal: By the way, I’m a believer. And I, honestly, I was crushed to find out it was not true.

Van Zuylen-Wood: I was crushed, too. And what really happens is this: You put your number on it, and it goes into a massive database. There’s about 230 million numbers on it right now, so almost everybody in the country — well, the majority of people in the country — seem to have their numbers on the Do Not Call list. And yet, the only thing that it does is if somebody calls it enough times, or if enough numbers on the list, I should say, are violated by a certain robocaller, the government, represented by the FTC, the Federal Trade Commission, in this instance, will, in theory, jump in and track down and prosecute the offending dialer.

Ryssdal: I love the emphasis on “in theory,” because, in reality, none of that happens.

Van Zuylen-Wood: Yeah. I mean, the Federal Trade Commission is a teeny, tiny government body that doesn’t have the time, money or manpower to prosecute these guys. And even if they did, the problem is they’re incredibly hard to track down. The few successful instances of robocall syndicate prosecution, if you want to call it that, have, you know, unearthed boiler rooms in India, or boiler rooms in some random part of Orange County, California, but it’s few and far between.

Van Zuylen-Wood: Essentially right. So if the extent of the Do Not Call list was that good telemarketers would police themselves out of existence, the bad guys won’t do that because they’re not afraid of getting caught. They make too much money and they’re too hard to catch. So the government, a few years ago, sort of threw up its hands and kind of lobbed it over to the private sector, and they sort of asked Silicon Valley to create apps that would block calls on your cell phones or your landlines. And indeed, in the last few years, a number of call-blocking apps have surfaced. The problem is, they all work differently. They all block different numbers. Most of them don’t work on your landline, which means there’s no universal fix. You have to download all of them, and even then a lot of calls are going to slip through. Are we then just doomed to a future of robocall hell? I don’t want to say yes, but I did a lot of research on this, and the only solution I can see on the horizon might be something called caller ID authentication. That would work like the little blue check mark next to your Twitter.

Ryssdal: And we know how great Twitter is. Come on, man.

Van Zuylen-Wood: That’s right. Nothing untoward ever slips into that medium.

Van Zuylen-Wood: But the only way that would work is if the big telecom companies got their act together and put a lot of money and resources behind developing this sort of technology, which would be complicated, and so far the telecom companies have been very sluggish in addressing this issue.

Ryssdal: Do they just, they see no upside for them? They don’t want to even get into the mess?

Van Zuylen-Wood: I think they don’t want to get in the mess, A) for legal reasons because, and I don’t know if they’re saying this in good faith or not, but their argument is, “We’re worried we could block legitimate calls from going through and open ourselves up to legal challenges.” I think the more accurate reason might just be that it’s a huge lift, and they just don’t feel like doing it. So they’ve kind of passed the baton to some of these apps. But so far they haven’t done a lot of lifting themselves.