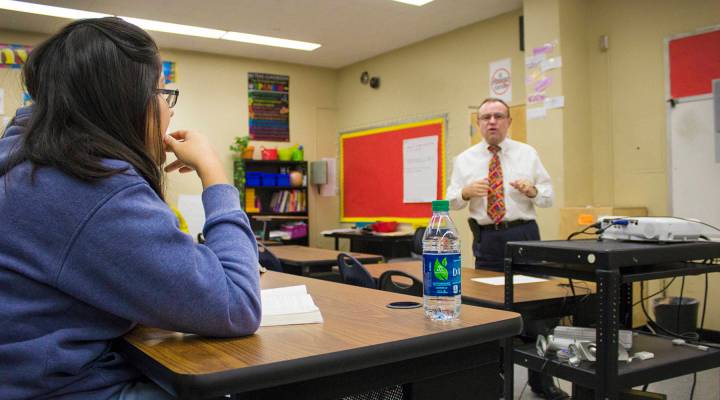 Move over, Advanced Placement. Take a seat, International Baccalaureate. There’s a challenger in town who wants to get students college credit in high school.

In all 50 states, a growing number of high school students are taking what are known as dual-enrollment or dual-credit classes. They’re single classes that earn students both high school and college credit. Ten states now make it mandatory for districts to offer these classes.

And the number of students under 18 taking college courses has skyrocketed. It went from under 300,000 in 1995 to over 1 million in 2015. So, with so many students taking these classes, what’s the payoff and who’s paying?

In a large cream-colored basement classroom at Energy Tech High School in Queens, New York, students sit quietly. They’re in 10th grade, but this is a three-hour critical thinking college class taught by an adjunct professor from a nearby community college.

When the year wraps up, these 15- and 16-year-olds will have college credit under their belts.

Energy Tech is one of 19 public high schools in New York City where students can earn credits from a nearby college. The district partners with the City University of New York system and Bard College to offer college classes at no cost to about 8,000 students. At Energy Tech, students can stick with the program for two years after 12th grade to finish the degree.

Professor Mike Mauro lectures during a critical thinking class at Energy Tech High School in Queens, New York. The 10th-grade students in the class will earn both high school and college credit.

The school exposes students to the possibilities of college and the advanced school work of a college course.

“It helps me to think more outside the box than in the box,” said Reyad Yassin, a 10th-grader. “You have to use, like, experience or common knowledge to solve these problems.”

He digs the challenge, and keeps something else in mind.

Yassin may be more right than he knows. According to a recent Columbia University study, simply taking a dual-enrollment class makes students more likely to graduate high school, go on to college and earn more credits than peers.

And that’s something school districts are willing to bet big on.

“There are ways in which we’re making a financial investment in these young folks,” said Phil Weinberg, deputy chancellor with the New York City Department of Education. “For some of our young people, money is a reason they can’t continue their education.”

Because college costs. And these classes do, too. The department of education and City University of New York split the costs: between $500 and $680 per student, annually.

“I think that as we strengthen the bridge between high school and college, no matter whether it’s in New York City or anywhere else in the country, they will go and they will do well,” Weinberg said.

Today, districts offer these classes in every state. Ten states require districts to offer them.

In Indiana, Iowa and New Mexico, about half of all high school graduates have completed at least one college course, according to the National Alliance of Concurrent Enrollment. And the numbers are growing.

“They’re just now really taking stock of this phenomenon, which has sort of grown faster than people could take account of,” said Davis Jenkins, senior research scholar at Columbia University and one of the authors of the Columbia study on dual-enrollment classes.

Today, four times as many students are taking these classes, compared to 20 years ago. But with such massive growth, there’s been little room for districts to step back and assess how these programs work.

“It’s not a silver bullet,” Jenkins said. “We’re just sort of approaching it ad hoc and at random.”

According to Jenkins’ study, whether students actually earn a college degree varies by state. And many states have big achievement gaps between lower- and higher-income students.

“This is extra college, that’s good, but is this college that helps you progress to complete your college degree?” said Clive Belfield, professor of economics at City University of New York. “If the course doesn’t help you complete college, then that’s a concern for economists.”

“This will translate into an improved labor force,” Belfield said. “But it will take many years.”

A closer look at dual-enrollment programs shows another likely beneficiary. About 70 percent of students under 18 who get college credit in high school do it through a community college.

“This has become much more of the revenue of community colleges,” Belfield said. “With dual enrollment, you know that there’s a crop of 11th-graders and 12th-graders every year.”