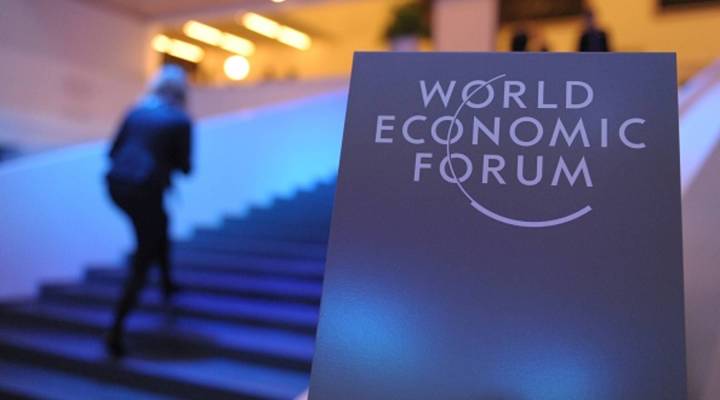 COPY
The scene at the opening of the 2014 World Economic Forum in Davos, Switzerland. (Eric Piermont/AFP/Getty Images)

The scene at the opening of the 2014 World Economic Forum in Davos, Switzerland. (Eric Piermont/AFP/Getty Images)
Listen Now

Update (Jan. 23,2019): This story was published before last year’s World Economic Forum in Davos, Switzerland. However, the information still pertains to this year’s meeting, which takes place from Jan. 22 to Jan. 25, 2019.

Next week, government and business leaders from around the world will meet in Davos, Switzerland for the 2018 World Economic Forum to discuss this years’s theme: “Creating a Shared Future in a Fractured World.”

So what exactly goes on at these gatherings? Davos vet and MIT economics professor John Van Reenen spoke with Marketplace Weekend about the five things everyone should know about the World Economic Forum.

1. People are very earnest about the forum

Even though there’s an impression of the WEF as an elite meeting of businesspeople and politicians, Van Reenen says that people who attend are very mindful about wanting to genuinely do good and address the economic problems and global issues of the day. Talking economics on a Swiss mountaintop may seem a bit chilly (literally and figuratively), but Van Reenen says he’s always struck by everyone’s earnestness.

2. There’s a certain amount of anxiety around the WEF

With that earnestness comes a serious dose of self-awareness — the WEF is a gathering of elites on a Swiss mountaintop, and this year more than ever, Van Reenen says there’s a lot of anxiety about the event appearing too privileged. The reputation of the Davos meeting as a chance to ski and sip champagne while chatting up some of the biggest leaders in global finance is hard to shake. This year, a rise in populist movements has attendees feeling extra anxious about shaking that reputation and making an effort to show the world that there’s a lot of work being done at the forum.

3. It’s not just politicians and businesspeople

Van Reenen says that while the forum does attract world leaders and big-name CEOs, there’s a lot of variety in who attends the WEF. Academics are well-represented, as are the media. And there’s a certain amount of wacky mixed in too — celebrities, philanthropists … Van Reenan says he even came across a meditation retreat leader one year.

Despite the anxiety and the seriousness, Van Reenen says the forum is a great time. It’s a star-studded event in a beautiful setting. Those in attendance can mingle and ski in between panels and meetings, and Van Reenen says many would be happy just to sit there taking selfies.

5. The good stuff goes on behind closed doors

The bad news? If you’re not actually in Davos, you might miss out on the best information. Van Reenen says that panels and recaps can’t do the WEF justice, because most of the most interesting conversations take place over dinner, or during casual chats, not during the main events.

This year, Van Reenan expects that those at the forum will spend a lot of time discussing populist movements, the emergence of far-right and left leaning parties, and the continued goal of pursuing global economics.