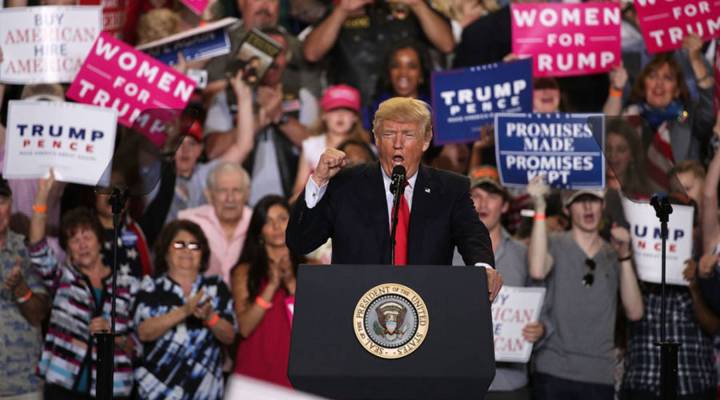 One of the big promises made by Donald Trump during the presidential campaign was that he was going to bring manufacturing back to this country. We spent some time in Pennsylvania talking about manufacturing with people in the industry for our series The Big Promise and spoke with Cary Quigley, the vice president of Sterling Technologies in Lake City. Marketplace host Kai Ryssdal checked in with Quigley about his business. The following is an edited transcript of their conversation.

Kai Ryssdal: Let me know how business is. That’s the standard first question, how are you doing?

Cary Quigley: Business is OK. A little slow at the end of the calendar year for us, but it’s picked up. Future looks pretty bright. We’re pretty excited.

Ryssdal: Last time we chatted, you were not thinking your future was so bright. What’s changed?

Quigley: You know, honestly, I think maybe, hopefully, some of these new tax laws are helping us. But I think the economy has really started to spark, and what we’re starting to see is some of these companies are ready to start spending money on their business again, invest in their businesses and start growing.

Ryssdal: Yeah, so give me a sense of that, actually, right? So custom rotational molding, you guys do large plastic rain barrels and stuff like that — I was out there, and it’s just a super cool operation. The market, the interest in those things has picked up, is that what you’re saying?

Quigley: Yeah, but also the custom contract manufacturing. So, you know, we’ll take somebody from just a scratch where they’ve got an idea that they scratch on a napkin, and we’ll manage the whole project and take them right through to warehousing the project, physically shipping the product for them. So what we’ve seen recently over the past maybe four to six months is we’ve really seen people calling and saying, ‘Hey, would you call this project for me?’ So, we’re starting to see a lot more activity in the marketplace.

Ryssdal: How’s your labor force? I imagine if you’re busier you need more people. You guys are kind of a ways out of Erie downtown, right? Sort of in an area without much mass transit. How are you doing finding people to work?

Quigley: Right. Yeah, that’s our No. 1 problem that we’re all facing. You know, our industry is very physically laborious, and it’s tough to begin with. And, you know, the unemployment rate’s relatively low, that’s a great thing. That’s a sign that the current administration’s doing some things right, in my opinion. But it’s interesting because it’s really impacted our ability to bring people in. You know, at this point, it’s forced us to elevate our pay scale and start to seek a little higher-end worker, and that’s OK. You know, we certainly have no problem with that.

Ryssdal: I don’t want to get down too far into the tax law, but one of the things that was a key item for a lot of companies was this idea of being able to immediately expense your capital investments. Are you seeing that? Are you acting now on buying new big rotational molders and stuff?

Quigley: Interesting question. Yes, we certainly are. We currently have a machine being installed as we speak — and we just ordered an even larger machine that’s due to be delivered in April or March, brand new piece of equipment. We’re very excited about that.

Ryssdal: How much is one of those big things run you?

Quigley: They’re three to four hundred thousand dollars apiece. It’s an investment in the business. And I hope that what we’re doing and what we’re seeing is a pretty widespread thing across the country. I mean, “Make America great again” is all about manufacturing in our mind. If we’re a strong manufacturing country, we’re putting a lot of people in jobs and keeping people busy and getting paychecks.

Ryssdal: What do you want in the next year then out of the White House and Washington?

Quigley: More of the same. You know, it would be great if we could see some things that make us a little bit more competitive with our neighbors from the north in Canada. They ship a lot of plastic into the states. And, you know, with our location being close to the border, it seems to impact our business. So we’d love to see if something there could take place that would certainly help us. More motivation for the small business so that we can invest in our business and our employees. Any of those incentives that we could see would be very helpful.