You’ve seen people around your office suddenly intensely staring at their phone around noon Pacific Time/3 p.m. Eastern Time, there’s a good chance they are on an app called HQ Trivia. And if you haven’t seen someone play, you’ve probably heard about it on Twitter.

HQ is an free app that hosts a live trivia game show typically twice a day. HQ sends a notification out when it is game time, then thousands of players log on at the same time to compete against each other for the jackpot. Here are five things you need to know:

It’s a start up

HQ was founded by the creators of Vine — the now defunct six-second video app. The game launched as an iOS app in late August and has steadily climbed the app store charts. HQ isn’t making any money right now. Currently, HQ is backed by venture capital and is seeking another round of funding, according to Recode. No ads or sponsored content yet, but the structure of the game has potential for commercials or product placement. It’s also easy to imagine a future for HQ where players have to pay for “extra lives,” which would give them another chance when they get a question wrong.

You probably won’t get rich playing

Yes, you can make money if you get every question right, but there’s always a catch. Typically, the cash prize is $2,000, but that’s split up between all the winners. So even if you do win, you’re sharing with potentially hundreds of people and only end up with a couple bucks. Then, once you do win, you can’t even cash out to your PayPal account until you win up to $20. However, there are some special occasions where the pot is bigger. On New Year’s Eve, there was a pot of $18,000. Winners of that round walked away with about $80 each.

It recently broke a million players during a game where the prize money went up to $10,000. The week before, the app had around 800,000 players on at the same time. The app was also rolled out to Android users this month.

With all those new users, it’s pretty clear the app is having trouble scaling to size. The game glitches all the time. The visuals are often a pixelated due to a buffering lag. There’s been instances where questions just don’t show up for some users or it won’t let users tap the question. There’s even been an instance where the game didn’t start at all. Players don’t shy away from sharing their frustrations in the chat box in the app or on Twitter, and it’s pretty clear HQ knows it.

Its goofy and fun

If you know HQ, you know Scott. Scott Rogowsky is the main host of the game show, and the internet loves him or loves to hate him. Maybe a little of both. He tells a lot of dad jokes, has a lot of corny banter in between questions and is pretty self-aware about it all. Whenever there’s a different host subbing in, HQties (that’s what he calls players) are quick to start blowing up the chat box with a chorus of “WHERE’S SCOTT?!” Even if you’re out on question three, you probably rolled your eyes at a bad pun or gave it at least a half-hearted laugh. Oh, also the intro music goes hard. 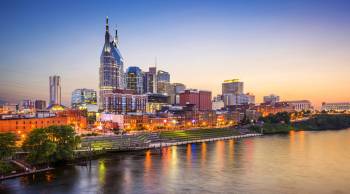 Nashville may not have gotten HQ but Amazon is opening a logistics hub with 5,000 jobs in the city