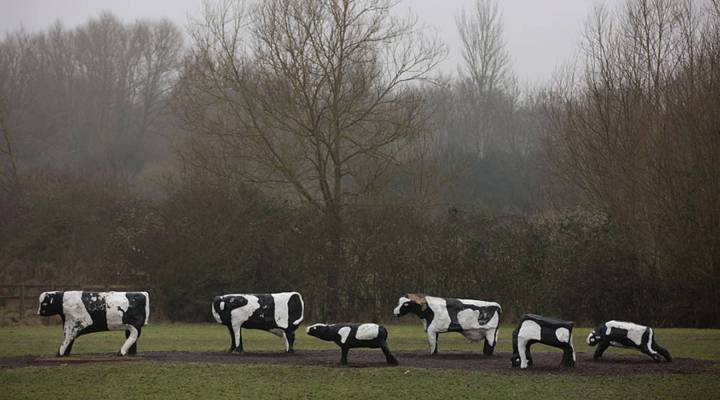 The annual award of the “European Capital of Culture” designation puts the spotlight on a European city whose cultural assets have been overlooked.

The award is run by the European Commission, the European Union’s executive arm, and that body has decided that since the United Kingdom is heading out of the EU, it will no longer qualify for inclusion.

Five British cities were in the running for the title for 2023. The fact that they can no longer take part has caused anger and dismay in Britain.

“We will continue to have relationships with Europe. We think in a European way. We have every right to be considered for this award,” Limb said.

Like the other cities seeking the title (Leeds, Nottingham, Dundee and Belfast, which is making a joint bid with the city of Derry, Milton Keynes was largely motivated by the potential economic benefits of winning the award.

Pete Marland, leader of Milton Keynes City Council, told Marketplace: “We think it would  have brought in upwards of 200 to 300 million pounds [$270 million to $400 million] in the period between now and 2023. It would have really boosted the economy.”

The northern British city of Liverpool reckoned that after it gained the title in 2008, it made more than a billion dollars following a big increase in visitors, hotel bookings, restaurant bookings and even inward investment.

But could Milton Keynes have won anyway? It is not on the face of it an obvious contender for a cultural award. Built in the 1960s to relieve overcrowding in London, the town lacks the grand old buildings and higgledy-piggledy charm of many older British cities. Critics say it is dull, bland and featureless, a sterile, concrete dormitory whose only real claim to fame is that it has 130 roundabouts, or traffic circles, more than anywhere else.

The town’s most famous public art installation — five concrete cows standing in a field — seemed to epitomize the manufactured quality of the place.

Even the tourist chief Limb cannot resist retelling, ruefully, an old joke: “What’s the difference between Milton Keynes and a pot of yogurt? The answer is that the pot of yogurt has culture!”

But Limb insists this negative image is completely wrong. The town is packed with culture. The Milton Keynes City Orchestra is world class, the town has a very successful theater and the neighboring villages abound with history. The words of the hymn “Amazing Grace” were composed by a local clergyman whose story is told in a local museum.

One of the town’s biggest tourist attractions is Bletchley Park, where an army of British code breakers cracked Germany’s Enigma code during the Second World War.

“This was essentially the place where the war was won,” said local businessman John Cove. “This shows you what an important part this area has played in the history of Europe. It underlines our credentials as a European Capital of Culture.”

Cove deplores the European ban as “short-sighted and petty,” but he concedes the city has benefited from the resulting publicity: “There’s been an opportunity for us to be shouting about ourselves, what’s good about Milton Keynes, what’s different for people not only to come and visit but also to invest in, to move here, to live here,” Cove said.

The city has a population of 250,000, one of the fastest-growing economies in Britain, and it’s home to more than 3,000 manufacturing and service companies. It’s a center of technical innovation. This summer it will become the first European city to launch a public taxi service using driverless cars. Some people already call it the “Capital of the Future.”

Not a bad consolation prize and a title from which no one can disqualify it.