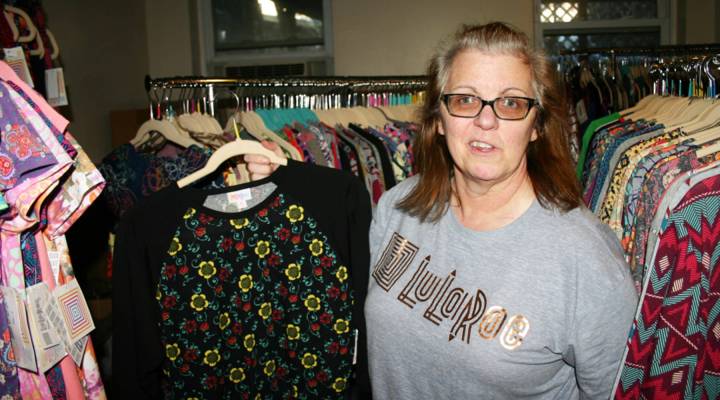 Raizy Reider was standing in the middle of what used to be her garage, surrounded by racks and racks of clothes when her son popped his head in to announce her first client. The clock had just struck 2:30 pm. It was time for the pop-up holiday shopping event, which Reider organized, to begin.

“There is someone! I see legs!” Reider said as the garage door rattled open. “It’s going to be super crowded. I am so excited.”

If it seems like lately your Facebook feed is filled with friends and acquaintances advertising the latest nail stickers or vitamins, you are not alone. According to the Direct Selling Association, in 2014, there were 18.2 million people involved in network marketing, an increase of over 8 percent from the previous year. By 2016 that number had gone up to 20.5 million. As social media has become a useful tool for direct selling, new companies have sprung up. LuLaRoe was founded in 2012 and has been growing rapidly over the past few years. In the middle of 2016, the company reportedly had 30,000 consultants. Today, the number is said to be more than 80,000.

Multilevel marketing is big business. The Direct Selling Association estimates that about $35.54 billion in sales were made in 2016 in direct selling — with about 21 percent of those sales coming from party-style events like the Reider’s pop-up shopping event.

Raizy Reider looking for an item for one of her clients.

Reider first became interested in LuLaRoe after she received a pair of their leggings from a family member. The more she learned about it, the more interested she became.

“At first, I was like maybe this isn’t a good idea,” Brenda Reider said. However, a month later after doing some research, she agreed to try it out as a part-time thing in addition to their other jobs. They signed up, ordered their first batch of clothes and when it arrived, created a Facebook group for their new business and went live. They do their LuLaRoe business as The Breiders.

The Breiders host multiple Facebook lives a week, post photos of their inventory and occasionally have people over for a pop-up shopping event. This particular pop-up event was geared towards Christmas and the New Year’s holiday. Within 15 minutes, there were four women browsing through the clothes on display. The fifth person through the door was Laura Zambelli, a local teacher who has been shopping with The Breiders for about five months.

“I do watch the FB Lives when I have the time, but I prefer the in person because I can come and try everything on. Whenever they have one, I come,” she said. Zambelli was introduced to LuLaRoe by her friend Jennifer Pazmino and has since convinced her sister to join the Facebook group as well.

Spotting Brenda Reider, Zambelli rushed over, giving her a hug.

“It must be so good to not have to work for someone, to make your own hours,” she told her.

Brenda Reider had just given notice at her full-time job. She was an account manager at a local printer, but quit the job to focus solely on LuLaRoe while Raizy Reider, who is also a special education administrator, finishes her doctorate.

“People often sell it like that: ’Start out part time and then if you’re good and if you’re lucky, you can expand it into a full-time business.’ That’s very attractive,” explained Kent Grayson, associate professor of marketing at Northwestern University. Other people who tend to be attract to multilevel marketing companies are those “who — in one way or another — are at the end of their rope. They have lost their job and or they’ve been unemployed for a while. It’s not uncommon for people to say that they dove into network marketing, multilevel marketing and it turned their lives around because they were unemployed and now they aren’t or because they were in a job they hated and now they’re in a job they love.”

The Breiders fall into the first category.

“We didn’t realize how much work it is, we can hustle, hustle, hustle. But the more we hustle, the more we can do. I love the fact that we have our own business, which is crazy,” said Raizy Breider, laughing. “We’ve chosen to work it a lot, because we love it. We love the connections we’ve made with people.”

But not everyone who signed up to be LuLaRoe consultants is as positive about their experience as The Breiders.

To say that multilevel marketing companies have a bad rap might be an understatement. Most people consider them to be a synonym for pyramid schemes. Mention one or two in a group of people and watch some of them scrunch up their nose in disapproval. Last year, John Oliver did an entire episode on the subject. The YouTube video alone has almost 10 million views.

There are, however, ways to blur those lines. For example, when recruiters get credit or rewards for products sold by those who they have signed up to join the company.

“What gets them into trouble is that there is compensation given to people not for selling product,” Grayson said.

A class action lawsuit filed in October of last year alleges that that’s exactly what happens at LuLaRoe. In an interview with Business Insider, two of the plaintiffs — Cheryl Hayton and Tiffany Scheffer — said that they believed the company’s structure benefited those at the top who signed up the most recruits and who pushed those recruits to buy more inventory.

Rewarding people based on sales can lead to a variety of issues.

“What happens in network marketing companies — by the way it happens in regular sales companies sometimes, too — is that the salesperson finds a way to make it look like they sold product when they didn’t,” Grayson explained.

For some LuLaRoe distributors that could mean buying a lot of inventory while selling just a fraction of it. As a result, many end up with garages full of items that have yet to be sold.

This is a common problem among people who want to sell products for multilevel companies. Out of the 20.5 million people who bought inventory from companies like LuLaRoe, Mary Kay and Avon in 2016, just 5.3 million are “actively managing a customer base and possibly sponsoring others to do the same. 800,000 of these people are full time and 4.5 million are part time,” according to The Direct Selling Association. This means 15.2 million people — about 75 percent of those involved with direct selling — bought inventory but did not go on to sell it to other people.

According to the lawsuit, LuLaRoe consultants are “required to purchase an initial inventory of clothing and marketing materials, which cost between $4,925 and $9,000” and are “required to resell the items for approximately a 40 percent markup and are generally forbidden to advertise lower prices.” However, while consultants can select whether they want to order leggings, skirts or dresses, they are not allowed to select the print in which these items are made, which can make selling the items slightly more challenging.

Just 27.37 percent of LuLaRoe consultants were eligible to receive bonus payments in 2015, according to a LuLaRoe income statement. An average payment that year was $2,118.54, while the median annual bonus payments made was $525.94. Consultants who recruit others to sell fall into categories such as sponsor, trainer, coach, and mentor which qualifies them for bonuses. Mentors make up just 0.08 percent of LuLaRoe consultants — 64 out of 80,000 — and earn between $500,000 to $2.4 million in bonuses each. Their median bonus was $1 million in 2016. That is one of the reasons why joining LuLaRoe can be so appealing. Yet few make it all the way up the ladder.

The Breiders currently have three consultants they have recruited and are sponsoring. “We’re hoping for 3 million,” joked Raizy Reider.

And what do they say to those concerned that LuLaRoe might be a pyramid scheme?

“My advice to people is do the research first. It’s not easy. It’s a lot of fun but it’s what you make of it,” Raizy Breider said. “Don’t get don’t get caught in the comparison trap. People sometimes will look at other people and say: ‘They’re doing so well. What do they do?’ It’s a lot of hard work but don’t let yourself get involved in negativity if anyone tries to tell me something negative, I just really don’t hear it. I don’t listen. I say: ‘You know what I want to invest my energy in working the business. This is my business. I love it.’ And that’s really what it’s about.”