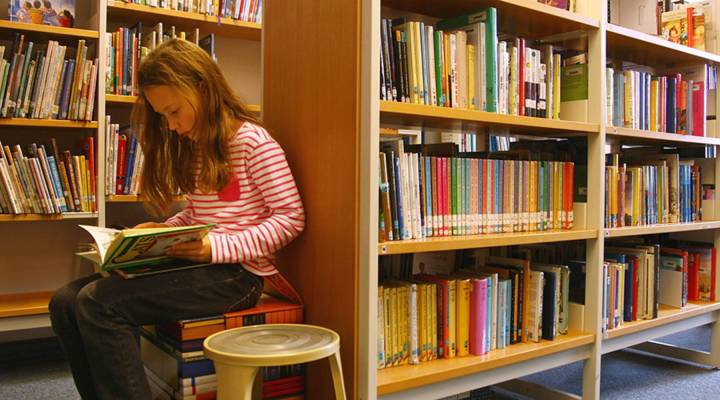 At school, sixth-grader Jonatan Morales gets in trouble for possibly the best reason.

“I get in trouble for reading,” he said with a chuckle. “During class, I’m supposed to pay attention to the teacher, but I just have my head down, reading.”

Which books consume his time? “Good books, not bad books,” he said. Jonatan checks out those good books – lots of comics – from the East Los Angeles Library and sometimes holds on to them for a little too long.

“And then when we look for the receipt, we lose the receipt,” he said “So, we don’t know when we’re supposed to turn it in. We’re human. We make mistakes.” The size of his current mistake: two dozen overdue books, a $28 fine. But last summer, Los Angeles County launched a program that allows anyone under 21 to sit in the library and read away their fines. That’s how Jonatan spent part of his winter break – sitting at a library table, knocking off $5 from the fine for every hour that he read.

“It’s a good thing that we have this program because sometimes we don’t have money to pay,” said Jonatan’s mom, Elizabeth Morales.

“We know that once a few dollars accumulate, sometimes, a lot of times, the cards just stop being used. And that doesn’t help anybody,” Hastings said.

In addition to letting people read away their fines, the LA County Board of Supervisors last month approved a fine-free student library card for students 18 and younger. With the cards, which are being distributed in schools, readers will be allowed to check out up to three items at a time with zero penalty for late returns.

A small, but growing number of libraries have experimented with cutting down fines, or getting rid of them altogether. Other libraries hold annual fine forgiveness days, letting people start completely fresh.

“It hasn’t done what it was designed to do, which was to get the book back on time so somebody else could borrow it,” Hastings said.

So, why don’t more people respond to the threat of a fine? Because library penalties are too small, said Uri Gneezy, a behavioral economist at the University of California, San Diego. When they’re just 15 cents a day – or a dollar a week – they’re not much of a deterrent.

“That basically says to the reader, ‘well, it’s not that bad to be late. Now, you’re telling me it’s only one dollar bad, then I might as well do it,’” he said. Gneezy said either significantly hike the fine or get rid of it altogether. “No fine promotes better behavior than a small fine,” he said. Without money in the mix, Gneezy said readers are more likely to return books on time because it’s the right thing to do.

“In psychology, it’s called communal relationship,” he said. “You don’t want it to become an exchange relationship, like when you go to the supermarket, you expect to pay for things. I think libraries want to be in the communal world.”

But truth is, they’re also in the financial world. LA library officials said the county can afford getting rid of fines – they make up less than one percent of its $200 million library budget. But for smaller places like the Ohoopee Regional Library system in Georgia, getting rid of fines is hardly a consideration.

“We shouldn’t have to balance the budget with fines, but it’s really the only way we can,” said Cameron Asbell, director of the library system. She said those 20 cents a day add up to more than $13,000 in annual fines.

“In one of my counties, the fines account for about half the book money,” she said. “So we couldn’t buy books without fines.”

But Asbell said she doesn’t want kids to think of librarians as these unforgiving, forever-shushing guardians of books. She said that’s how her town saw one of her old librarians.

“She rode out with the sheriff’s deputy and would knock on doors to get the materials back,” she said. Luckily for those people, that librarian is now retired.