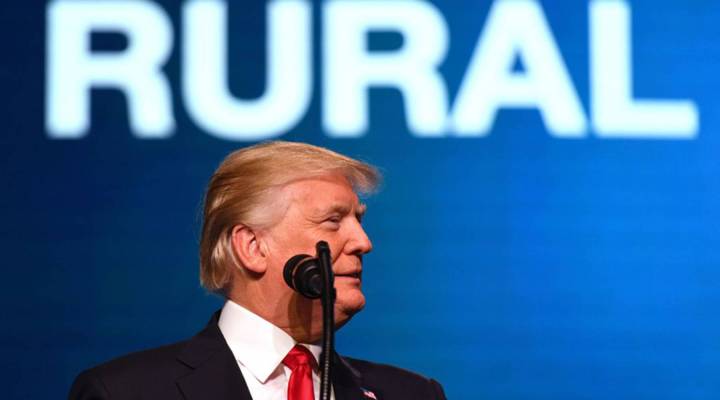 President Donald Trump promoted his administration’s accomplishments for rural America in a speech before the American Farm Bureau Federation Convention in Nashville, Tennesse on Monday.

“You embody the values of hard work, grit, self-reliance and sheer determination we need to — did you ever hear this expression? — make America great again,” Trump told the crowd, returning to his campaign slogan. Rural Americans voted overwhelmingly for Trump in the 2016 presidential election.

Touting changes in the tax plan Trump said are beneficial to farmers, the president also used the platform to announce a newexecutive order  designed to expand access to broadband internet in rural areas.

But the speech, the first by a sitting president to the convention of one of America’s biggest agriculture industry groups in more than 25 years, touched only briefly on some of the major issues facing farmers today, such as trade, deregulation and labor issues.

Trump has ordered his administration to renegotiate the terms of the North American Free Trade Agreement, something that concerns many in the agriculture industry, which has done better than many other sectors under the trade deal. In fiscal year 2016, the U.S. exported more than $20 billion in agricultural goods to Canada, and another nearly $18 billion to Mexico, the country’s first- and third-largest agriculture export destinations, respectively.

The issue is one Agriculture Secretary Sonny Perdue said he has discussed with the president.

“Our president, as you know, is very concerned about our trade deficit,” Perdue commented in December at a National Press Club event in Washington, “and I’m prone to remind him whenever I’m in his presence that agriculture contributes to a trade surplus, and he needs to recognize that.”

In Nashville Monday, the president also highlighted his administration’s focus on rolling back water and other environmental regulations many in the agriculture industry, including the Farm Bureau, view as burdensome.

“As we put money back in the pockets of all Americans,” said Trump, “including our farmers and ranchers, we’re also putting an end to the regulatory assault on your way of life.  And it was an assault indeed.”

Some farmers view the canceling of certain regulations by the Trump administration as harmful to competition and smaller operators.

Trump spoke briefly on the topic of illegal immigration, renewing his calls for funding for a border wall. But he did not talk about how to address the ongoing chronic labor shortage facing many farmers in America, many of whom rely on migrant workers to do delicate or labor-intensive farm work throughout the country.