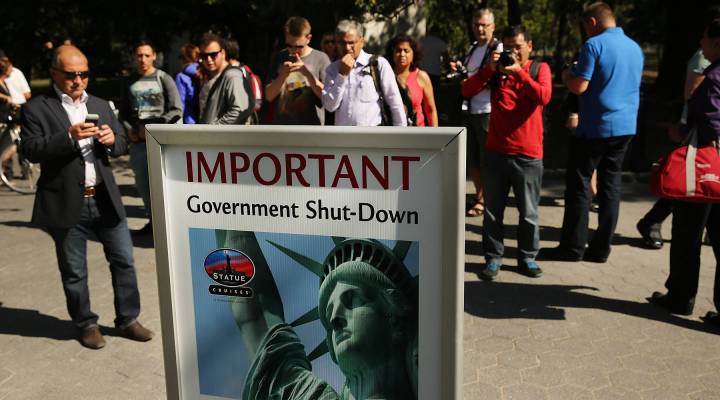 COPY
People look at a sign informing them that the Statue of Liberty is closed due to the government shutdown in Battery Park on Oct. 1, 2013 in New York City.  Spencer Platt / Getty Images

People look at a sign informing them that the Statue of Liberty is closed due to the government shutdown in Battery Park on Oct. 1, 2013 in New York City.  Spencer Platt / Getty Images
Listen Now

Congress faces another deadline to pass government funding on Jan. 19. That’s when the latest of three stop-gap funding measures expires. For years, Congress has relied on what are called continuing resolutions to prevent government shutdowns when the parties can’t agree on full appropriations bills, and fiscal year 2018 is no different. A continuing resolution basically keeps government agencies funded at the same level as the previous year, even if the needs of a given agency have changed.

“They’re also limited in kind of new types of accounts or things like that,” said Marc Goldwein of the Committee for a Responsible Federal Budget. “They can’t go forward with new initiatives but more importantly they have no certainty about how much money they’re going to have.”

That can be a particular issue for the military, said Todd Harrison at the Center for Strategic and International Studies. He said maintenance of ships and other long-term planning can be delayed when appropriations bills are not passed in a timely manner.

“The Department of Defense, and many other government agencies as well, have been operating under continuing resolutions for more than one third of the time for the past nine years,” he said, “and that is highly unusual.”

According to a report from Bloomberg Government, more than 70 Pentagon programs are likely on hold as a result of the short-term funding.