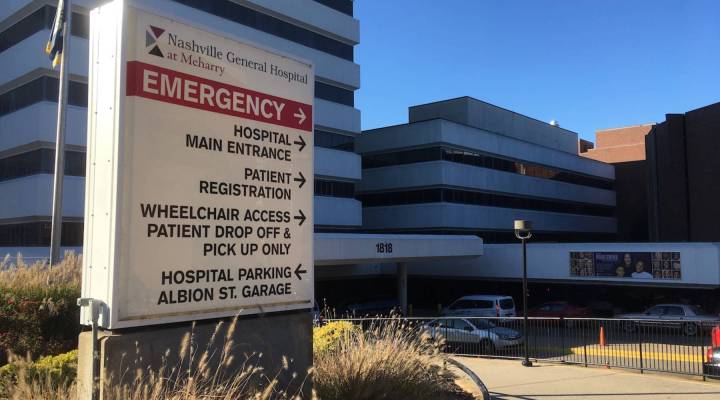 COPY
The daily census at Nashville General Hospital is down to fewer than 40 patients, making it one of the least busy hospitals in town. But advocates for the uninsured say that's still 40 patients who are getting care that might have trouble finding it elsewhere. Blake Farmer/ for Marketplace.

The daily census at Nashville General Hospital is down to fewer than 40 patients, making it one of the least busy hospitals in town. But advocates for the uninsured say that's still 40 patients who are getting care that might have trouble finding it elsewhere. Blake Farmer/ for Marketplace.
Listen Now

Public hospitals are often cash-strapped. And in Nashville, the city’s safety net facility is seen by many as an unnecessary money pit. Now the mayor has proposed ending the inpatient part of the hospital and rethinking the city’s role in caring for the uninsured. But those who serve the indigent say the country’s roughly 325 urban public safety net hospitals are more integral than they sometimes appear.

“I look at Metro General as ‘the people’s hospital,'” Ernest Anderson said as a quiet pump sucks fluids from his foot where his pinky toe was recently amputated.

At 58, Anderson’s feet are in rough shape. Decades of drug abuse and not managing his Type 1 diabetes have taken a toll. A few years ago, he hobbled into the emergency room of a private hospital in town. ERs are required to treat anyone who comes through the doors.

“I was told that it wasn’t an emergency,” he said, showing his festering foot. “My foot was swollen and infected. It was stinking and they said, ‘Well it’s infected and it’s stinking. We’re going to give you some antibiotics, and you go see your primary doctor care.'”

Every ER has to be smart about who gets admitted, but Anderson says anytime he’s tried to use a private hospital without insurance, he gets the sense they want him gone as soon as possible. Nashville General Hospital, on the other hand, seems to have open arms.

“It always has been like that,” he said. “You might have had to wait a while, but you got care.”

Nashville General is heavily subsidized by the people of Davidson County. In fact, the government has had to regularly provide mid-year cash bailouts because the hospital blew through its annual $35 million from taxpayers.

And that is why Mayor Megan Barry says it’s time to do something else, especially now that business has slowed to a crawl. The facility is operating at one-third of its capacity. Competition with private hospitals has only increased now that more people have insurance.

“I believe we can invest our resources more strategically to provide for the health care needs of our city’s indigent population, while maintaining operations at Nashville General Hospital,” Barry said in a letter to her city council.

The announcement followed Meharry Medical College’s decision to move students to a hospital across town because the case load at General has become so light.

But advocates for the indigent say the hospital is still playing a vital role.

“I think that people underestimate the responsibility of the hospital, the difficulty of providing services for a community that lacks resources,” said Katina Beard, CEO of Matthew Walker Comprehensive Health Center, a nonprofit clinic in North Nashville.

Anyone who comes to the health center and ultimately needs a hospital is directed down the street to Nashville General. Maybe it’s general surgery or to deliver a baby. Often, they’re referred back to this clinic for follow-up care.

Beard says nowhere else makes it as easy to see someone who has no ability to pay.

“A patient that needs to see a cardiologist that doesn’t have any insurance, those appointments could be six, seven months out,” she said. “Even with Nashville General in the mix, they are a significant time out, so with them not in the mix, it’s concerning.”

The management of Nashville General say they’ll try to avoid closure of inpatient services, though they’re in a difficult position because they only have enough money to operate through Jan. 30.

The mayor’s plan is to maintain some specialty services on an outpatient basis — perhaps run through a contract with a private hospital. For those who need inpatient care, Barry has proposed creating a fund that would help pay their bills at other medical centers. It’s unclear how this would work.

But in her view, Beard says such a system will take an attitude adjustment.

“If the mayor does come up with a voucher system, how difficult will the hospitals make it for our patients to be seen who don’t have insurance?” she asked.

There is also a concern about uninsured patients being billed into oblivion. When Nashville General declares a patient indigent, it doesn’t even try to charge them. But private hospitals can’t afford to be so lenient.

“If I go to the hospital and I run up an $80,000 bill and I have no means of paying that, therefore I now have it on my credit history, and I can’t pay it back, and I continue to spiral further and further on the poverty spectrum,” said Reginald Coopwood, General Hospital’s former CEO, who is now leading the public health system in Memphis, known as Regional One Health.

Coopwood said he understands all too well the challenge of making Nashville General work. He said the same headwinds that existed when he was at the helm have only amplified — like intense competition for insured patients from nearby hospitals with healthy marketing budgets and a persistent stigma that if you have a choice, go anywhere but General.

“It’s easy to say, ‘We’re going to stop funding public hospitals, it’s not our responsibility,'” Coopwood said, noting that people might be surprised to see who falls through the cracks when one closes. “Those individuals who need quality care and don’t have coverage because of our health care system, they will always be with us.”