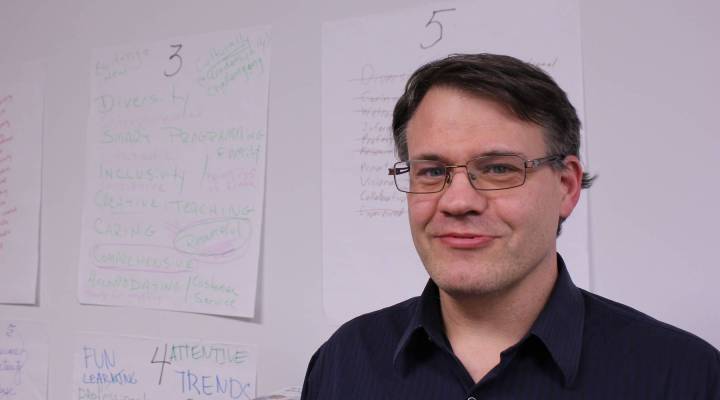 COPY
After he was laid off in August, Todd Miller left refugee resettlement work to teach English as a second language at a local university.  Emma Jacobs/ for Marketplace

After he was laid off in August, Todd Miller left refugee resettlement work to teach English as a second language at a local university.  Emma Jacobs/ for Marketplace
Listen Now

In December, the Trump administration ordered nonprofits that receive federal funding for refugee resettlement to close any sites around the country receiving fewer than 100 refugees.

Dozens of closures of branch offices are now expected over the next several months, the latest setback for organizations which handle everything from picking up refugees from the airport to finding them apartments and teaching basic skills for navigating life in the U.S.

The number of arrivals has been dropping since President Donald Trump took office. Margaret O’Sullivan, executive director of the Nationalities Service Center in Philadelphia, said its current class for recently arrived refugees is much smaller than usual. The course teaches skills like how to apply for jobs in the United States. Her office would not be slated for closure under the new rules. However, between October and the end of December, Sullivan noted, “We’ll have resettled 45 refugees. Last year the same period of time it was 146.”

Various versions of the Trump administration’s travel ban have tried to stop the flow of refugees from predominantly Muslim countries like Syria and Somalia. The administration has also lowered total refugee admissions to levels not seen since the 1980s.

Nonprofits agencies that provide services for refugees typically receive about $2,000 from the government per refugee, so the slow down has forced many to restructure.

“We had layoffs in the spring,” Sullivan said. “We had both layoffs and position freezes that we never rehired.”

Todd Miller worked in the resettlement program at Bethany Christian Services, in Pennsylvania, until he was let go in August.

“It’s really one of the most meaningful jobs I’ve ever done in my life,” Miller said.

However, he and many of his colleagues have sought new work in other fields. Miller now teaches English as a second language part time at a local university.

“I have a family that’s counting on me for income,” he said. “You need to make sure that you’re in something that’s not going to disappear soon after you start.”

The Obama administration set a goal for fiscal year 2017 of admitting 110,000 refugees. The Trump administration reduced that number to 50,000, lowering the cap to 45,000 for current fiscal year 2018. The State Department says this reduction is needed to make time for more vetting and to process a backlog of asylum applications from people already inside the U.S.

Now though, with the reductions and the closing of smaller sites, those who work with refugees warn of a loss of institutional knowledge and infrastructure, including offices that support refugees resettled in their area in the past as well as new arrivals.

“Administrations come and they go,” said Danielle Grigsby, associate director of the non-governmental organizations coalition Refugee Council USA. She lost her previous job at a U.S.-contracted nonprofit working with refugee applicants in Kenya earlier this year.

“Policies around refugees and numbers change and shift,” she noted. “What we are also facing with these closures is the cost it would take to regrow the program.”

Grigsby believes the disruptions throughout the system will make it difficult for the administration to reach even its new, lower target for refugee arrivals.

“These executive orders and then administrative changes further hinder the ability for the United States government to arrive 45,000 — and this is all in light of the world’s worst, most intense refugee crisis.” She says the government isn’t on pace to meet that number, so far, at the end of the first quarter of the fiscal year.

Agency officials have said they do intend to try to reach the cap for the year.

“Refugee admissions rarely happen at a steady pace,” the State Department said in an emailed statement.  “It would be premature to assess FY 2018’s pace at this point.”