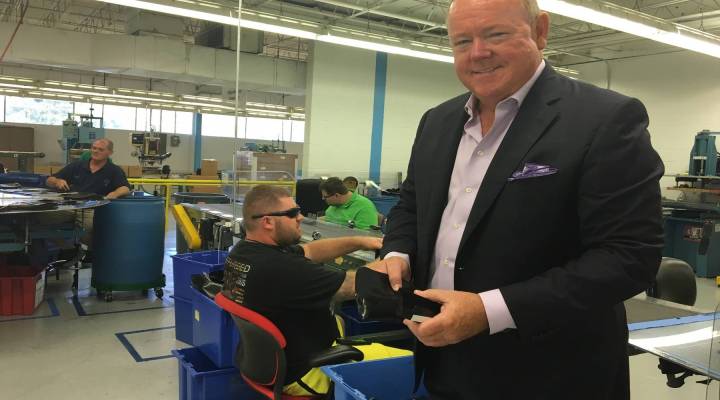 COPY
Dallas Lighthouse for the Blind CEO Hugh McElroy is positioning the organization to take on new manufacturing jobs. Lauren Silverman/ for Marketplace

For decades, jobs in textile and apparel manufacturing have been on the decline across the U.S. Texas is no exception, but one Dallas nonprofit is training people to work with textiles … people who are visually impaired.

On a busy Dallas street, next to a bank and a Kroger supermarket, there’s something you might not expect: Dozens of people manufacturing products on a factory floor bigger than a football field. They’re making pens and sunglass cases, shirts and vests. Trilon Lias, who is blind, is sewing pockets on bright orange safety vests. He uses a custom-made plastic guide to help line up the edges of his work.

Dallas Lighthouse for the Blind is a nonprofit that has been in business since 1931. Most of the products employees produce here are old school: markers, highlighters and custom binders for the Navy and Air Force. When Hugh McElroy took over as CEO a year and a half ago, the nonprofit’s reliance on government contracts was a big concern.

“The thing that would keep me up at night were the legacy programs, some of which were over 70 years old,” he said.

McElroy, who has worked in large, multinational companies, knew that if the organization was to survive — and continue to provide paying jobs to more than 100 blind and visually impaired people — it would need to diversify.

That’s when he thought of textiles.

“Textiles is globally roughly a $3 to $4 trillion dollar enterprise,” McElroy said. “If you can participate in that in some way, and find a niche, so that you’re not trying to compete with a commodity on the world market, you can succeed in some amazing ways.”

There were a few “doubting Thomases,” as McElroy puts it, until he pointed out two other political and cultural movements that give Dallas Lighthouse for the Blind a strategic advantage in textile manufacturing.

The second advantage for the Lighthouse is the Americans with Disabilities Act.

“You’ve got an ADA badge that can be applied to a product that you’re manufacturing or servicing,” McElroy said. That ADA badge attracts clients who like to say their products are made in a place that employs people with disabilities. “If you combine those [advantages] and you look at the size of the textile industry, it became a pretty simple decision to make,” McElroy said.

Simple, except, they had to buy new equipment and retrofit sewing machines to be safe for visually impaired people to use. Employees also needed new training.

Jessie Tran, who has been blind since she was little, was one of the first to sign up. “I start[ed] out making eyeglass cases and markers,” Tran said. “When they opened the sewing, I feel like I want to learn something new.” Tran remembers her aunt and mother sewing in Vietnam, where she was born. Today, she’s hemming the sleeves and bottoms of 200 to 300 shirts a day in Dallas. About 65 people work at the Lighthouse as sewing technicians and they’re paid an average of $12 per hour.

Like Trilon Lias, Tran relies heavily on her hands. She sits in front of a sewing machine that has a small angled piece of metal bolted an inch away from the needle; it’s her guide. There are also sighted supervisors here for quality control.

The shirts Tran sews are for the Texas Department of Transportation. McElroy is focused on attracting non-governmental clients, too.

They’re even connecting with fashion-oriented companies, like the Dallas-based Upland Bespoke. Founder Kathryn Beach could have had the hunting vests that she designs made in New York City, where her clothing line for kids is produced, but she wanted to be true to her Texas roots, she said.

“I have five children, and I wanted to be closer to my family and office so that I could oversee manufacturing and not have to do everything over the phone or flying to New York,” Beach said.

The high-end vests are now sold in Bass Pro shops in Texas cities like Grapevine and San Antonio.

Mark Riccobono, president of National Federation of the Blind, said getting this kind of experience — making high-end products for companies on the rise — could be really helpful for visually impaired workers.

“We would like to see that spin out more and more to other areas, so that it’s not just blind people working in a particular location, but its blind people who are contributing to all sorts of companies and organizations,” he said.

Riccobono hopes people with visual impairments come into places like Dallas Lighthouse for the Blind to gain skills and experience, and if they’re interested, find work for mainstream manufacturers.

McElroy said that Lighthouse is in the process of developing this type of placement program. He’s particularly interested in potential partnerships with tech companies producing medical devices.

“Those are the products of tomorrow,” McElroy said. “Once upon a time, we sold mops and brooms and light bulbs. But there are market changes that you have to recognize.”