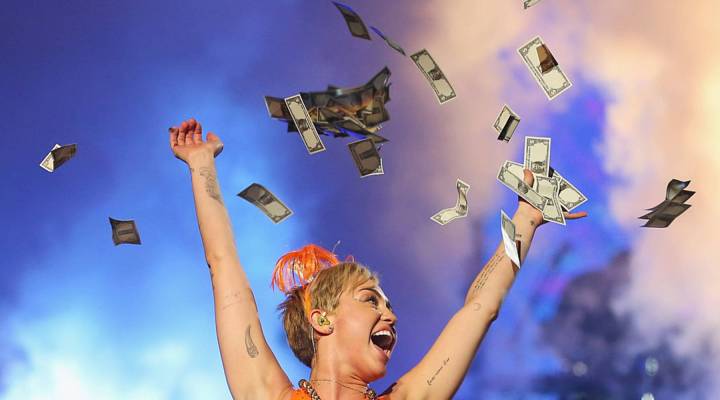 COPY
Miley Cyrus throws money in the air as she performs at the opening night of her Bangerz Tour in Australia at Rod Laver Arena on October 10, 2014 in Melbourne, Australia. Scott Barbour/Getty Images
Shelf Life

Miley Cyrus throws money in the air as she performs at the opening night of her Bangerz Tour in Australia at Rod Laver Arena on October 10, 2014 in Melbourne, Australia. Scott Barbour/Getty Images
Listen Now

Learning to be smart with money isn’t easy. And when you’re a 20-something who hasn’t been financially independent for very long, it can seem pretty intimidating. That transition into adulthood is where Chelsea Fagan is finding her financial advice niche. She is the woman behind the blog and YouTube channel called “The Financial Diet,” and now she’s the author of a new book by the same name. Marketplace’s Adriene Hill talked to her about her effort to make literacy with money approachable for a younger generation. The following is an edited transcript of their conversation.

Adriene Hill: In your book, on your other platforms, when you talk about “The Financial Diet,” it seems broadly focused on the millennial transition to grown-up, is that fair?

Hill: Why is that where you’ve decided to focus the blog, and the YouTube channel, and the book, on these big transitional questions?

Fagan: Because I think money by itself is not that interesting, at least not to most people. So if we can frame it in the context of life more generally and lifestyle, I think it’s a lot more appealing to a broader audience.

Hill: As I read your book, I was struck by that, how much of this advice isn’t traditional money advice. How have sort of traditionalists responded to that? Is there some sense of like, hey this isn’t a personal finance book, this is something else?

Fagan: Oh, I can 100 percent confirm that the actual personal finance/money community hate us.

Hill: Really? Tell me why?

Fagan: A lot of them are what I would describe as sort of free market purists and we speak very openly about progressive politics and how the solutions to a lot of these money issues are much more in the collective, things like student debt, predatory lending, that kind of thing. There’s a real sense of gatekeeping. The financial world is not like medicine or law where there are pretty strict regulations around who can talk about it. So the financial world and personal finance world tend to want to really gatekeep their own community and make it so that only “financial experts” can talk about money even in an editorial way. And we are not financial experts and don’t aspire to be. So I think that they have this real sense of they should not be able to talk about this and they should not be successful.

Hill: How do you deal with that pushback?

Fagan: I ignore it entirely.

Fagan: I think that’s just the core of what we do and that has been what, I think, has made us popular because the vast majority of people are not going to independently click on an article about 401ks. But if you can frame it in a way that has relevance to their overall life, I think they’re much, much more likely to be interested.

Hill: Why do you think young people broadly, and women in particular, aren’t getting this sort of advice either from schools, from their family, where has this fallen down?

Fagan: Whether or not you get a financial education, and the degree to which you get it, is going to be largely dependent on your family’s financial literacy. I think there’s also a lot of parents who don’t really put that on the checklist of things to teach their children about. Schools, I think to be quite honest, the public education system and to an extent the private, although I’m not as familiar, don’t do a great job about teaching a lot of things. There’s not a huge incentive for it. Unless you make it part of standardized testing and part of the regular curriculum, it’s very hard to inject these things into the high school education. I mean you used to have things like home economics where you would have the family’s pretend budget sheet for a week, but I don’t think that was ever really even for those people who had it, part of the core curriculum.

Hill: And is there, as somebody now who’s the face of “The Financial Diet,” who does videos, who’s got this new book out, do you feel pressure to make the right choice all the time? Do you ever just say, you know what I’m going to do something I know doesn’t make any sense and I know is against every piece of advice I give people every day because it’s hard to always live by the rules?

Fagan: You know what, no. I think, partially for opportunistic reasons, our brand is very much set up to be accommodating to being human beings. I think our ethos has always been — we’re not robots. There are a lot of personal finance gurus and experts out there who advocate living these extremely ascetic lifestyles and really counting every single penny and I don’t live that way, our team doesn’t live that way, we’ve never advocated living that way. So even if for example I bought a lot of decorations for the holiday season, which in some objective sense I guess could be considered frivolous or wasteful, but they bring me a lot of joy so I have zero regrets and I don’t feel particularly ashamed to say that.