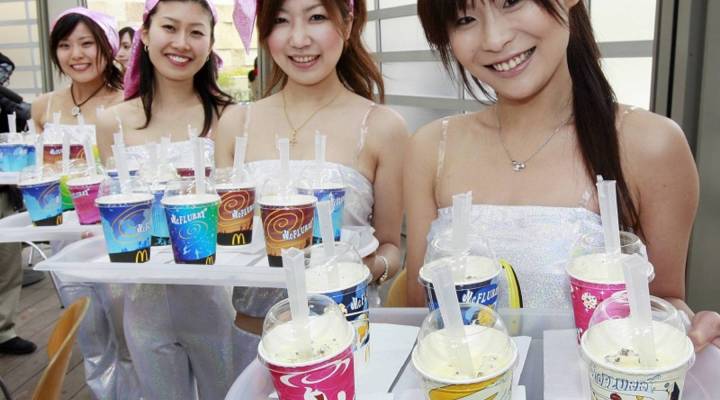 Listener Brian Stieler had this question:

Why is the ice cream machine at McDonald’s always broken?

Imagine this — it’s a hot summer day and you are really craving a McFlurry.

“I’m a big fan of the McFlurry. I like McFlurry’s — I they think they’re tasty,” said 31-year-old screenwriter Adam Goldman. Today we’ve come to a McDonald’s in Brooklyn to check out an ice cream machine mystery. It’s almost lunchtime and the place is packed. We can see the soft serve machine right behind the counter. We are so close we can practically feel the McFlurry frostiness while we wait in line. We order two — a new flavor, the Rolo, and a classic Oreo. We were off to a good start — the soft serve machine was working. But the McFlurry machine, a fancy, mechanical stirring device, was not. A sad moment ensued.

It turns out many consumers have been complaining about McDonald’s ice cream machines for some time. And they’ve been especially vocal on social media.

Josh Anish is a data guy. He’s director of marketing at Quantifind, a social media research firm. A couple of years ago he was playing around with some new software at work that identified trends in what consumers were saying about brands on social media. And, Anish said, there was a weird spike in the data.

“The data was extremely compelling. I mean, I do this all the time, and this was the most black-and-white story I’ve ever seen,” he said.

People were angry at McDonald’s. Really angry. According to Quantifind, last year negative comments were up almost 80 percent from the year before.

“And then we said, ‘Why are people more and more angry at McDonald’s?'”

The No. 1 reason, said Anish: the ice cream machines. They seemed to be out of order all the time. So far this year he said there have been 21,744 negative tweets about McDonald’s ice cream. McDonald’s wouldn’t tell me how often this happens. What a company spokesperson would say, but only via e-mail, was:

“To deliver the great-tasting treats our customers enjoy, we regularly service our soft serve equipment during off-peak hours. Customers who come in during that time may encounter a longer wait time or soft-serve dessert unavailability.”

McDonald’s also wouldn’t confirm a Wall Street Journal article from early this year that described a lengthy and laborious ice cream machine cleaning process. Which led me to 25-year-old Madi Alexander. She’s a data journalist in Washington, D.C., but when she was in high school, she worked at a McDonald’s in Oklahoma City for two years.

“The ice cream machines at McDonald’s are always broken mostly because they take forever to clean,” she said. Alexander said it can take between three to five hours. “I remember at some point having to climb up onto a ladder and having to feed a pipe cleaner down in the machine and it getting stuck several times.”

She said there are all these little white plastic parts. And it’s complicated — you have to take multiple pieces out — wash them, wait for them to dry completely before putting them back in. And the machines have these sensors — sensitive sensors. If it overheats from dispensing too much ice cream, it would automatically shut off. But the worst part, she said, was if you messed up at any point in the process, you had to start all over again, from the beginning.

“Oh, I would rather do my taxes than clean that stupid machine,” she said. “Oh, yeah, 100 percent. Oh, absolutely, I would do five people’s taxes before I would clean an ice cream machine again.”

The ice cream machines at McDonald’s, Alexander said, are like that temperamental printer at your office — you know, the one with all the buttons and sorting trays. When it breaks you just kind of avoid it and hope someone else will fix it.

Andrew Jerdonek, 34, also used to hold down a high school job at McDonald’s (he now works in sustainable energy). He said he knew exactly what a successful burger looked like almost immediately after beginning his first day on the job.

“I mean, I can remember closing my eyes and remembering the McDonald’s theme song for the Big Mac to make sure I didn’t forget special sauce,” he said. Jerdonek was trained to put together a burger fast. “Everything was laid out and it was intuitive. Even down to the amount of ketchup that was dispensed,” he said. “I could probably put a burger together in 10 seconds.”

But unlike Alexander, he was not trained to deal with the temperamental machines.

At the McDonald’s where he worked, there were only a couple of employees who understood how to use the machines, according to Jerdonek. And if they weren’t on shift when there was a problem, well, then customers would be disappointed. More so, said Ira Kalb, a professor of clinical marketing at the Marshall School of Business at the University of Southern California, than if a small business stumbles.

“The expectation is I’m going to McDonald’s because they always have what I what I need, and what I want, and why would they run out of what I’m looking for?” he said. “We’re a little more demanding when big companies don’t have what we want when we want it.”

Back at the McDonald’s in Brooklyn, it looks like we are going to get our McFlurries after all. Remember the broken McFlurry machine? Fortunately, the worker behind the counter came up with a solution: She hand stirred our McFlurries.

“I can’t even tell that it was made artisanally, by hand rather than by machine,” Goldman said. “I’m feeling better than I was a minute ago. I got  a McFlurry.”

All was right with the world — at least in Brooklyn. Other McFlurry fans, take heart. McDonald’s says it has new soft serve and shake equipment that will be available — in the future.