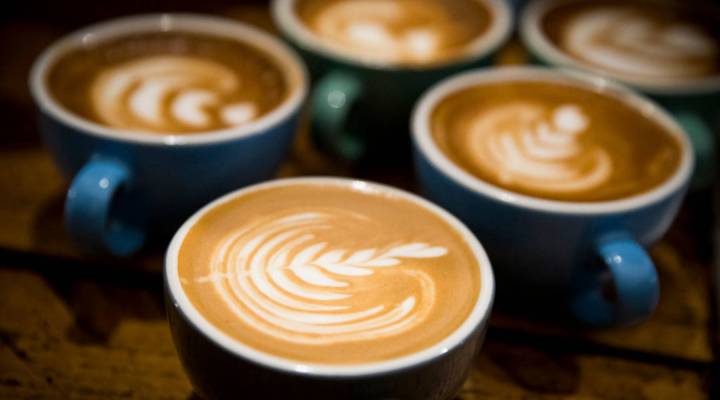 It's not just coffee and milk.  Tristan Fewings/Getty Images

Why does a latte cost upwards of $4? How much does a small coffee shop make from that?

Sneering over the price of coffee and people’s addiction to caffeine beverages has become a popular American pastime. Before avocado toast came along, coffee addiction was considered as one of the main reasons why millennials could not seem to make ends meet.

Some would argue that if you are paying $4 for a latte, you are being overcharged, but the price of a latte is based on a lot more than just the cost of its main ingredients.

A rule of thumb for most food and drink places is to keep the costs of their ingredients somewhere between 30 to 35 percent of the revenue. As such, it would be easy to assume that a typical profit margin to be 70 percent. Except, the ingredients are not the only expenses that owners incur while running their business.

Just ask Jane Kupersmith, who along with her partner Jeff Grant owns two coffee shops and one vegan bakery in Bloomington, Indiana. They have just celebrated their third anniversary as a company.

One of the hidden costs for a shop like Kupersmith’s Hopscotch Coffee is all of the wasted coffee. It might take just two shots of espresso to make that latte, but the machine does not make a perfect espresso shot every time. Baristas have to waste a number of espresso shots every morning as well as whenever there is a quick change in barometric pressure or humidity.

Not just the ingredients …

It’s not just the milk, coffee and syrups that make up the cost of your favorite morning beverage.

Then there are other costs for things like to-go cups, sleeves for the cups, stir sticks, and drink carriers.

“Those all add between 4 and 7 cents to coffee,” Kupersmith said. “When we price for drinks we calculate them as to-go drink just because a lot of our business is for customers who are taking their drinks away.”

For customers who decide to stay and enjoy their beverages at the cafe, drinks are served in mugs.

“Those things break and we’re constantly having to replace glassware,” said Kupersmith. “When we opened this place, it took a while to get used to all of the kinds of loss associated with running a food business. There’s just so much that’s getting beat up and used constantly and the glassware — it really is pretty short lived.”

Glassware is not the only thing that gets beat up from constant use. Replacing broken equipment can be a significant cost for the shop. For example, Hopscotch recently had to replace a coffee grinder which cost $2,000.

All of that cuts into that supposed 65 to 70 percent profit.

In a blog post for Kiva Han Coffee, Bethany Warren, calculated some of these hidden costs and concluded that the base cost of a latte is closer to $2.31.

And while a 40 percent profit is nothing to sneeze at, that’s what a coffee shop would make assuming nothing went wrong, waste was kept at minimum and they actually sold 150 items a day. What’s more, coffee shops in different states might have different expenses — rent in Indiana might be much less than rent in New York City, for example. Minimum wage requirements also differ from state to state, meaning that some coffee shops might have higher labor expenses than others. No one formula would fit all coffee shops.

As for Hopscotch customers, few raise objection over the prices.

“I feel like when we tell everyone what we’re doing — that they’re getting organic milk and that we’re roasting the coffee — they pretty much understand what the quality of the product is. So there hasn’t been a lot of pushback,” said Kupersmith. “And then when there’s pushback, we don’t feel too bad about it because we know it’s not negotiable and we’re not going to serve a crappy product. We’re just not going to do that.”

At the moment, the most expensive drink at Hopscotch is the vanilla latte, which would set you back $6.96. A big part of that is the cost of the vanilla-flavored syrup.

Vanilla prices have been climbing for years. Early this year, they spiked even further after a cyclone hit Madagascar and destroyed as much as third of its vanilla crop. Last week, Kupersmith bought a gallon of vanilla for $328.

And while the vanilla latte is the shop’s most expensive one, the store is making zero profit on it.

“We’ve kept the vanilla syrup at two dollars for a large drink as an add-on because it’s price sensitive,” explained Kupersmith, adding that customers won’t buy it if it costs more than that. “We also tried to cut it for a while and customers didn’t like that either. So we’re basically covering our expenses but we’re not making money on the vanilla. We’ve figured out that for our market we need to have that available.”