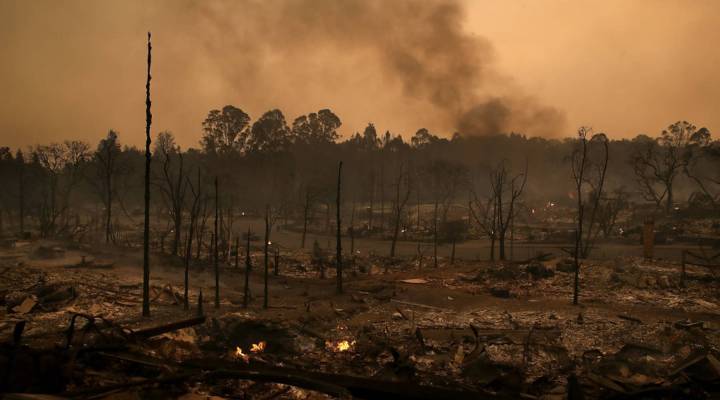 Smoke billows from a neighborhood that was destroyed by a fast moving wild fire on Oct. 9, 2017 in Santa Rosa, California. Justin Sullivan/Getty Images
Listen Now

2017 was full of natural disasters. They didn’t seem to let up — fires in California, floods in Texas, hurricane after hurricane in the Caribbean and on the Gulf Coast. The media moved on quickly, but recovery efforts are long from over. We talked to local officials in five American cities and territories about their hopes and objectives in the coming year. Here’s the first conversation in our series.

Santa Rosa, California, located in the northern half of the sunny state, is known for its wineries, agriculture and now raging, freeway-jumping wildfires. The Tubbs Fire that ignited Sonoma County in October is among the deadliest in California history. It had unexpected, long-term effects: toxic ash, sinkholes — and it exacerbated an existing housing crisis that the mayor of Santa Rosa, Chris Coursey, was addressing when disaster struck.

Coursey joined us to update us on his city’s recovery efforts.

Chris Coursey: What we’ve discovered about this particular disaster, and I suspect it’s true of all disasters, is that once we solve one problem and turn the page, we find several more. The first rain that we received after the fire exposed a lot of damaged underground storm-water infrastructure. We had plastic pipes underground that burned up the line. So when it started raining, we had problems with that runoff. We did have a couple of sinkholes. But more on the human scale, people didn’t just lose their homes; a lot of people lost their jobs. We had two major hotels burned down. We had a Kmart burn to the ground. There were a lot of jobs lost.

Kimberly Adams: What is your recovery looking like so far?

Coursey: It’s going along well. We have spent a lot of time cleaning up debris. We’ve lost more than 5 percent of our housing stock in Santa Rosa; more than 5,000 houses in Sonoma County. We’re also looking toward the future, not just toward rebuilding the 5,000 houses that we lost, but adding housing, because we had a housing crisis before the fire, and we’ll be facing one after it as well.

Adams: Are there enough workers to do everything that needs to be done to help your area recover?

Coursey: Well, that’s to be determined. We had, you know, pretty full employment before the fire started. Some industries had a hard time attracting employees, and the construction industry was one of those. There will be a lot of work. We expect a lot of workers to be coming here to do that work. That creates additional housing challenges for us. But we’re working on those as well.

Adams: And as you think about rebuilding and think about the future, are you thinking about planning for future fires?

Coursey: Of course. We live in a state where wildfires are a fact of life. What’s different about this wildfire is that it happened inside a city. When the fire came down into town, jumped across a six-lane freeway and burned into a suburban neighborhood, I think that it created a new paradigm for what we think of as the wildland-urban interface. We have to think about rebuilding smarter, about making homes more fireproof, about all kinds of ways to prepare for fires in the future.

Adams: Mayor, who’s paying for all of this rebuilding?