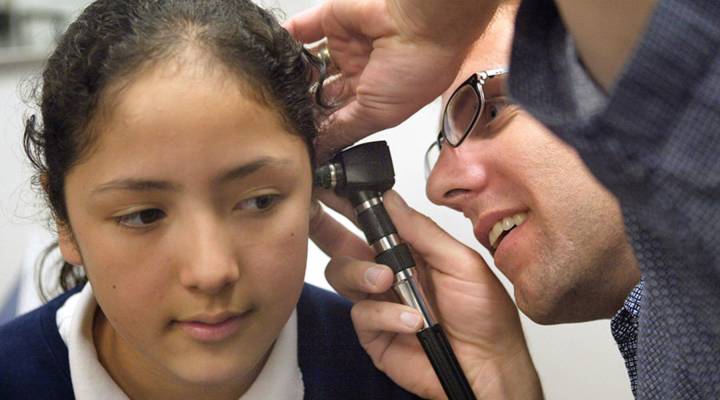 COPY
“If we don't take care of our children then we're going to have sicker adults," says pediatrician Marsha Raulerson. Tim Boyle/Getty Images

Congress passed a short-term measure this week to give some federal funding to the Children’s Health Insurance Program, the joint federal and state children’s health insurance program that lost funding at the end of September. The program has provided health insurance for millions of children in the U.S. In one state, Alabama, one in eight kids uses CHIP. Before this stopgap funding, Alabama was going to have to kick kids off the program starting Feb. 1. Now there’s a reprieve, but the situation is still tenuous.

To better understand the effect this has on children, Marketplace Weekend talked to Marsha Raulerson, a pediatrician in rural Brewton, Alabama, earlier this week before the short-term funding was approved about what other options there are for her patients, 10 percent of whom use CHIP. Below is an edited transcript.

Lizzie O’Leary: You were on the commission that designed Alabama’s version of CHIP. Since the 1990s, the rate of uninsured kids has dropped, but I guess I’m wondering, among the folks you see, why couldn’t these families go out and buy private insurance? What are the obstacles there and what are the possibilities for them?

Raulerson: I’ve had families tell me that if they tried to get insurance through their job with family coverage, it would be as much as $600 a month. They also have very high co-pays. In fact, I’d say the kids who get the worst care in my area are the ones who have co-pays of $40 or upwards. Because if the child gets sick, the parent has to say, well, do I have an extra $40 to pay the doctor today? And what if I get a prescription? Maybe I can just watch my child for a few days.

O’Leary: The state told us that if there is no more funding some of these kids would get a sort of certificate that they are coverable and would be able to go to BlueCross. Of the families you see, would they be financially able to do that?

Raulerson: No, no. Right up front I can tell you, no.

O’Leary: So what would you say to members of Congress when the House and the Senate can’t seem to agree on putting more money in this program?

Raulerson: What are you thinking of? What is more important in our country than the health of our kids and the future of our country depends on children getting what they need.

O’Leary: Dr. Raulerson, what happens to your clinic and offices? Alabama’s not a wealthy state and probably does not have the revenue to make up any loss of federal funding.

Raulerson: Well, what worries me the most right now is our rural hospital. We have a rural hospital that serves a large population in this part of Lower Alabama. And they’re right on the edge of going under. As far as my office is concerned, I’m a semi-retired pediatrician now. I care for only children with high-risk conditions. Already I can’t pay my bills.

O’Leary: Does that mean you’re dipping into your own pocket?

Raulerson: Oh yes, I have been dipping into my own pocket for quite a while. Mostly because my patients are predominantly Medicaid patients, and the reimbursement is not great. Plus, I try to spend a lot of time with high-risk children, and I can’t imagine what’s going to happen.

O’Leary: You know, one of the arguments we hear is that these kids, while they may be on CHIP or on ALL Kids, their families make too much money to qualify for Medicaid. Why do you think that the state and the federal government have an obligation to insure them?

We also called the Alabama Department of Public Health and talked to Cathy Caldwell, the head of their childrens’ health insurance department for some additional context on the situation in Alabama.

To hear the full story, click on the player above.