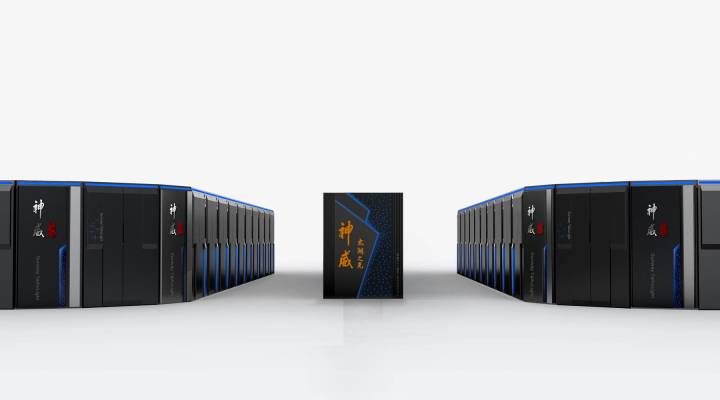 COPY
The Sunway TaihuLight is the first fully designed and made-in-China supercomputer that is also the fastest in the world. Courtesy of the National Supercomputing Center in Wuxi

The Sunway TaihuLight is the first fully designed and made-in-China supercomputer that is also the fastest in the world. Courtesy of the National Supercomputing Center in Wuxi
Listen Now

When Gan Lin started his university studies a decade ago, the United States had seven of the top 10 supercomputers in the world, while China had none.

These days, Gan oversees research at the National Supercomputer Center in the eastern Chinese city of Wuxi, which operates the world’s fastest computer, called the Sunway TaihuLight.

“China’s supercomputing capabilities have evolved very fast over the past 10 years,” Gan said.

Supercomputers are vital for national security and scientific research, but more businesses have become dependent on them.

These machines can help with complex calculations, such as designing new weapons, cars, airplanes, medicine, predicting the weather, analyzing earthquakes, or finding oil and gas deposits.

Gan Lin took a gamble and dedicated his career to supercomputing when China had barely made its mark in the field. Now he oversees research for the world’s fastest supercomputer, the Sunway TaihuLight, in the eastern Chinese city of Wuxi.

Gan’s job is to develop more applications for the Sunway TaihuLight, which also goes by a Chinese name, “Shenwei” or “divine power.”

“This supercomputer has a peak performance of 100 petaflops, or 100 quadrillion operations per second,” Gan said.

To put that performance into perspective, Gan said if all 7 billion people on Earth took a hand calculator, they would take 32 years to do the same number of calculations the Sunway TaihuLight can do in one minute. The Chinese machine is five times faster than the top U.S. supercomputer, the Titan in Tennessee.

“It is the largest number of supercomputers China has ever claimed on the Top500 ranking, with the U.S. presence shrinking to its lowest level since the list’s inception 25 years ago,” researchers at the Top500 said in their report.

Faster supercomputers like the Sunway TaihuLight can help industries do more. Suppose a company wants to build a wind farm. It would need to know where the strongest wind energy is.

“Calculating where the strongest wind in the world is over the course of a year used to take three months in China. The Sunway TaihuLight can find the answer in one week,” Gan said.

Armed with that information, a company could be generating energy before its competitors.

“If our supercomputer can calculate faster, then our country’s industries will be more competitive globally,” Gan added.

However, speed is only one aspect of what makes supercomputers powerful. China trails behind the U.S. in terms of technology, such as chipsets. These could be considered the brain of a supercomputer.

“Many of our machines are still running on U.S. chipsets,” Gan said.

American companies like Intel and NVIDIA supply almost all the chipsets to the top 500 supercomputers. That means if the U.S. government perceives a strategic threat, it could potentially curb another country’s supercomputing power.

In 2015, the U.S. blocked American companies from selling several chipsets to China because it worried that the Chinese were using them to develop nuclear weapons. Ironically, this ban may have helped accelerate China’s technological development. The following year, the Chinese unveiled the Sunway TaihuLight, which uses local chipsets. It’s the first supercomputer designed and made in China to be ranked as the fastest.

“That’s a remarkable transition,” physicist Eric Isaacs said. He is the former director of the Department of Energy’s Argonne National Laboratory, which runs one of the top U.S. supercomputers.

Isaacs believes that the U.S. still has an advantage because it designs better supercomputer software. This helped Boeing design new lightweight material to build its jets, he said. Even companies that make household goods, like Procter & Gamble, rely on supercomputers.

“A new kind of cleaner that needs replacement of some chemical because it’s not available anymore [will need a supercomputer] to do computational chemistry to determine how to improve it,” Isaacs said. Supercomputers are also used to design soap bottles that won’t shatter when dropped, he said.

To stay in the lead, Isaacs said the U.S. government needs to increase the amount it invests in research and development.

“From the late 1970s it was 1.2 percent of GDP. Now it’s down to about 0.8 percent, so that’s a significant drop … China, on the other hand, is constantly increasing its investment in R&D,” Isaacs said.

China and the U.S., along with Japan and France, are now in a race to develop a supercomputer 10 times faster than the Sunway TaihuLight, called the Exascale System. Chinese researchers say they need the exascale machine for maritime expansion, especially in the disputed South China Seas. However, a machine this powerful could also provide breakthroughs for businesses, such as designing longer-lasting batteries for electric cars. China plans to develop this next generation of supercomputer by 2020, one year ahead of the U.S.

America cannot be complacent, Steve Conway with Hyperion Research said. A recent study conducted by his firm found that industries dependent on supercomputers account for 55 percent of the GDP in the U.S.

“The U.S. government needs to maintain a strong track of investments in these supercomputers or it is going to hurt the U.S. economy and U.S. jobs.”