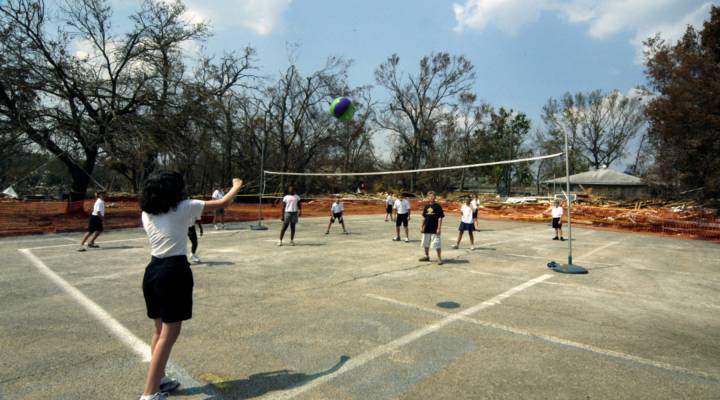 Those short play breaks that kids have in school don’t just improve their skill at hopscotch — there’s evidence that recess can actually help with social skills like collaboration and improve focus in the classroom.

While some schools have cut back on recess to make more time for standardized test prep, states like Florida and Rhode Island have been pushing back by implementing laws to make sure students get enough time for free play.

Marketplace reporter Amy Scott joined us to discuss the value of recess and what some teachers have noticed after giving their students several breaks. Below is an edited transcript.

David Brancaccio: So you want to talk about recess.

Amy Scott: Yes, school recess. Do you remember how much time you had in school to go outside and play in the dirt?

Brancaccio: I wasn’t timing. I know it was actually mud, because I’m from the state of Maine. But yeah, there was recess.

Scott: Well, in my school in the ’80s, we had 15 minutes in the morning, 30 minutes for lunch. But today, some kids have just a few minutes a day if they get recess at all. In other districts, kids might have recess just a few times a week. So recess as you and I may have known it is kind of a vanishing thing.

Brancaccio: All right, so less time for blowing off steam, running around. Why?

Scott: Well, as you know, we’ve been in an era of increased accountability for schools. More emphasis on standardized tests. They often see more value in increased instruction and test prep time. But there’s actually a lot of evidence that recess itself can boost academics. I talked with Stephanie Garst, who is executive director of the U.S. Play Coalition at Clemson University, and she says there’s actually a business argument for recess.

Stephanie Garst: Research shows that unstructured play helps children with their social skills or academic skills, and all of those 21st century skills that employers are looking for, like collaboration, communication, critical thinking and creativity. All those things come out on the playground.

Brancaccio: But gym class is still there. P.E. is in most schools, right?

Scott: Yeah, most kids get P.E. a couple of times a week, but it’s really the unstructured, child-led part of play that many experts say is so important. And some states are actually pushing back on this decline. In the past couple of years, Florida and Rhode Island have passed new laws requiring at least 20 minutes of free play every school day. There’s been an experiment in Texas where some schools are requiring their kindergartners and first graders to get out for recess four times a day for 15 minutes each. And Garst told me that at first, teachers were really worried about losing class time for instruction.

Garst: What they immediately started to notice is that the kids are less fidgety and less distracted, and a whole lot less discipline issues.

Scott: And, David, there are some workplace applications here too. Garst says grownups need this time. And, you know, I’m thinking maybe we should have a Marketplace game of four square or something.