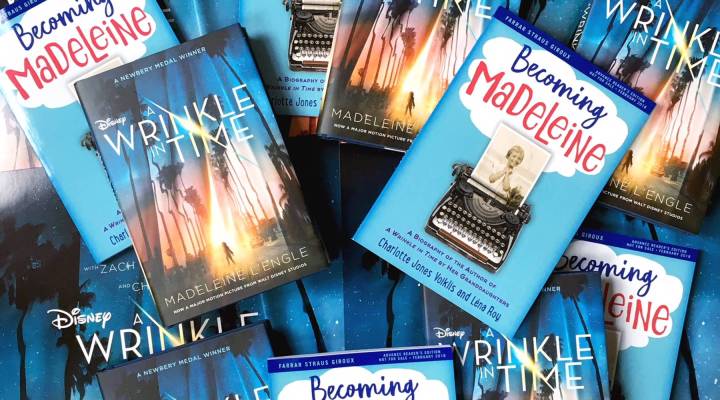 "A Wrinkle in Time" beside "Becoming Madeleine," a book written by Madeleine L'Engle's granddaughters, Lena Roy and Charlotte Jones Voiklis, who was interviewed on Make Me Smart. Courtesy Macmillan
Make Me Smart With Kai and Molly

"A Wrinkle in Time" beside "Becoming Madeleine," a book written by Madeleine L'Engle's granddaughters, Lena Roy and Charlotte Jones Voiklis, who was interviewed on Make Me Smart. Courtesy Macmillan

Madeleine L’Engle’s science fantasy adventure “A Wrinkle in Time” was the Make Me Smart book club’s last pick of the year, and listeners had plenty of thoughts and feelings about it. Many were featured on last week’s episode, but so much feedback came in that we decided to share more.

The novel was first published in 1962, and its age is important context for interpreting the book’s themes, as listener Gregg Baker pointed out:

I had forgotten all the religious references, which as an adult I find off-putting (I’m an atheist.) I also found the attacks against collectivism heavy handed and argued at a childish level — no collectivist society I’ve ever heard of comes close to the level of uniformity described in this screed. Given that this was written during the height of the Cold War, I infer that L’Engle was anti-communist. That’s well and fine, and I guess her arguments are written for children since this is a children’s book, but that means as an adult they seem way over-simplified to me.

Many listeners agreed with Kai that the book is more enjoyable for children and adults who read it as children. Many called and wrote in with fond memories, waxing nostalgic about revelations new and old reinforcing the book’s central theme that love conquers all, while many first-time adult readers said they found it too heavy-handed. But listener Steve Jones feels this message has endured time:

So much has changed in the world since that book was written … but the “moral” of the book (as I see it) has not. Though the act of a sister’s love for her brother (by risking her life to go back and save him) was enough to save  [her brother], the act of love is far greater than just the love of a brother of a sister… Greater love is risking [or] giving your life for one who does not know you.

It seems it was nearly impossible for readers to not think about faith and religion while reading the book. We know L’Engle was a “cradle Episcopalian” and spent years as the librarian and writer in residence at the Cathedral Church of St. John the Divine in New York City. We also know that ” A Wrinkle in Time” was one of the most banned books of its time, in part because of the way it treated religion. Listener Tricia Toledo wrote in to talk about her relationship to the text as a self-described born-again Christian.

I’m a born again Christian who has been attending evangelical churches for 20 years, during which time, I have also been happily married to an agnostic scientist. Needless to say, at church I often feel awkward, like Meg Murry feels at school. I don’t fit the mold of “evangelical” politically (didn’t support Trump or G.W. Bush.)

This has meant years of external confrontations from other believers telling me I’m wrong to my own internal struggle between believing my unique character — like Meg’s — is a weakness verse a strength. But recently, I have come to embrace that my weaknesses are actually “features” and not “bugs” in my overall human programming. This has divided me from evangelical culture a little more, but it’s a healthy outcome for my overall faith especially considering the extensive growth of conformity and tribalism that has taken a dangerous hold on the majority of American Evangelicals.

L’Engle explains an important aspect of her religious upbringing in the video below, which was that she never made it to Sunday school as a child.

This brings up another theme that listeners responded to: the conformist aspect of religious — and secular — education. One listener, Mark Gomez, wrote in about how L’Engle has inspired him as an educator:

I can see clearly where the themes of standardization and conformity make their presence known to the would-be audiences of the book, students and teachers alike. I can feel L’Engle making a commentary about these systems of control we call schooling. What is sad is that half a century later we are faced with many of the same challenges, some of which have only amplified.

As I struggle with you all to wrap my head around the times we live in, the context we find ourselves in; unfettered and destructive capitalism, non-empathic and obsessive violence, egoism inspiring the very ears of our souls to tune out and deafen those we deem different… I think stories such as these have the potential to reawaken the childlike qualities of untethered imagineering, which will undoubtedly hurl us towards a more just existence, all together as one.

When I was in elementary school, I refused for a time to read books with boy protagonists, and as an adult I find myself choosing to read books written by women over men. Only now that I’m revisiting “A Wrinkle in Time” in adulthood have I connected my desires then and now to see myself reflected in the stories I consume and fill my mind with stories written by women about women. As we learned in the interview with L’Engle’s children, “A Wrinkle in Time” was rejected by 26 publishers before editors at Farrar, Straus & Giroux accepted it. Considering the time in which she was publishing, the rejections could have had to do with her gender and the fact that the protagonist was a girl in the male-dominated science fiction genre.

And the storytelling of “A Wrinkle in Time” continues to stay in the hands of women: the anticipated movie debut is directed by Ava DuVernay and stars Oprah Winfrey, Mindy Kaling, Reese Witherspoon and Storm Reid. One listener saw the trailer at a “Star Wars” screening and thought of Kai:

[A]t the new “Star Wars” movie we were treated to the first look at Ava DuVernay’s adaptation and forthcoming movie based on the book. And while initially I was surprised by my reaction seeing her visuals juxtaposed against those that had been painted by the words in the book within my own head, I am excited that there is a fresh recombination of ideas in a book that I feel ultimately does a great job of making us feel a message, one of hope. Any “Star Wars” fan should truly understand and appreciate this. Come on, Kai, the force is strong with you!

Watch the trailer below, and if you haven’t read the book, read it in time for the movie’s March 2018 release. Stay tuned to vote for next year’s book club selections.