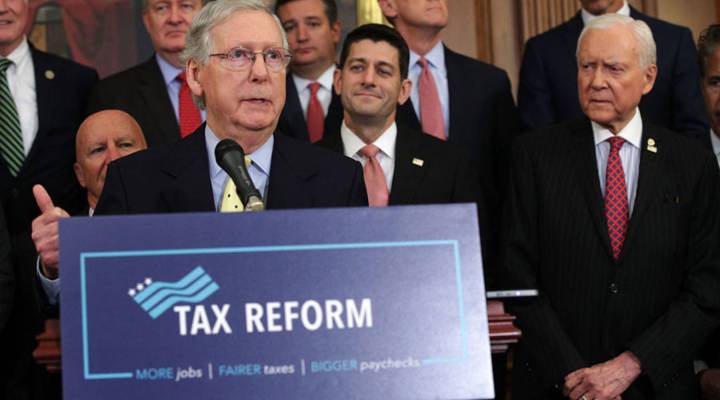 Congress will likely pass a tax bill this week. When that happens a lot of Americans may think that they never want to hear another word about the tax code — that is, if they haven’t already come to that conclusion. But in truth, lawmakers and taxpayers are going to be dealing with the ramifications of this bill for the next decade or so. Marketplace host Kai Ryssdal spoke with Steven Dennis, the Senate reporter for Bloomberg, about what that long-term debate might look like. The following is an edited transcription of their conversation.

Kai Ryssdal: First thing I want to do actually is. Make sure people remember that there there’s a — yes it’s a $1.5 trillion tax cut — but, there is this provision in the law called pay-as-you-go which means these provisions are going to have to be paid for somehow.

Steven Dennis : That’s true. There is a PAYGO law. The Republicans say they’re just going to waive that law but that requires Democratic votes here in the Senate. We still don’t know if Democrats will just roll over and allow that waiver to take effect. If they don’t, potentially Medicare, farm subsidies and a bunch of other programs could be cut next year.

Ryssdal: Talking about things that are going to have to happen next year and in the out years. There are expiration dates on some of these personal income tax cuts. There’s a whole bunch of other provisions that kind of guarantee we’re going to be talking about this law for the next five to eight years perhaps?

Dennis: Yeah. You know there is a pretty big tax cut up front and then it starts phasing out, a lot of those tax cuts start expiring starting in two years. But, sorting all that out is going to be the job of the next several Congresses and future presidents. And so, it’s not what you would draw up if you were going to design a tax reform plan in a lab where you want a stable tax policy where people can depend on what the future is going to be. Instead, this is going to be, you know, sort of another situation where Congress is going to have to keep on making decisions or else people are going to be hit with various fiscal cliffs.

Ryssdal: Speaking of fiscal cliffs, you remember how we were talking about the Bush tax cuts in 2012? That is 10 years after they passed.

Dennis: Yeah, actually it was sort of 12 years because they had to kick the can down the road a couple of times before then. And you know we could end up with a very similar situation in 2025, where a future Congress, future president, face hundreds of billions of dollars in tax increases that would happen automatically unless they acted.

Ryssdal: Turn this to the political for me for a second. The specifics are a little bit different, but it’s worth remembering here that the Affordable Care Act — Obamacare — was passed without a single Republican vote. This now will pass without a single Democratic vote. And here we are playing political Ping-Pong again with large chunks of the American economy.

Dennis: You know I think Republicans and Democrats will tell you that when you do these partisan maneuvers the policies themselves tend to be less durable. When you do have bipartisan bills like the 1986 tax reform bill that everybody keeps referring to, those policies tend to be a little bit more durable because both parties have something invested in them.

Ryssdal: Yeah it just occurred to me actually. The 1986 bill lasted for 31 years. This one won’t.

Dennis: One of the things that’s a problem for Republicans right now is this bill is pretty unpopular. People think it’s going to raise taxes even though most analysts think it’s going to actually cut most people’s taxes. If next year, in February or March, most people see larger paychecks and it becomes more popular; maybe that helps their prospects next year in the midterm elections. Republicans are looking to get shellacked in the midterm elections and they need to turn those fortunes around.