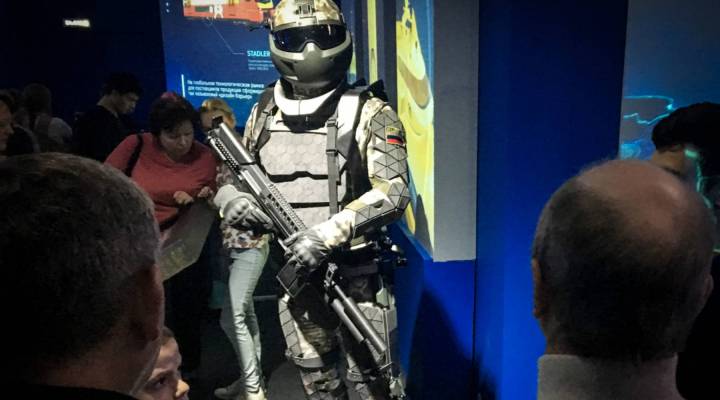 COPY
Visitors look at a prototype of a high-tech combat suit for the Russian army during an exhibition entitled "Russia Focused on the Future" at the Manege Hall in downtown Moscow on Nov. 6. MLADEN ANTONOV/AFP/Getty Images
Marketplace Tech Blogs

Visitors look at a prototype of a high-tech combat suit for the Russian army during an exhibition entitled "Russia Focused on the Future" at the Manege Hall in downtown Moscow on Nov. 6. MLADEN ANTONOV/AFP/Getty Images
Listen Now

Laser weapons mounted on ships or planes that can silently beam death to enemies. Electromagnetic weapons that direct energy at a target to cause pain, physical damage or destroy electronics. Autonomous lethal weapons that can make decisions about who and when to shoot. These are just some of the technologies that are being developed or are in use on real battlefields.

Many nations are racing to develop new warfare technology. Where does the U.S. land? And what do these advances, which seem to be increasingly removing soldiers from the emotional side of battle, mean for the future of war? Marketplace Tech host Molly Wood spoke with Robert Latiff, a former Air Force major general and a current professor at George Mason University. Below is an edited transcript of their conversation.

Molly Wood: How is AI being used in war?

Robert Latiff: So there are just literally thousands and thousands of streams of data that come into the intelligence community every day — far more than a human could ever look at. And so yes, it’s looking for patterns. Sometimes it doesn’t even really know what it’s looking for. That’s where the deep machine learning concept comes in.

Latiff: They do. The upshot or the implications of that to me are really frightening. The enemy becomes nothing more than an icon on a screen. One of the examples I like to use is that a sensor can tell you where an enemy is and how many weapons they have and how many soldiers. What they really can’t tell you is the state of mind of those soldiers. Whereas a soldier on the ground can assess what the state of battle is and whether to press an attack or not press an attack. So the human element on the battlefield is really important.

Wood: On the topic of well-being, you’ve been thinking not just about the equipment used in warfare, but also possible advances in medicine for treating post-traumatic stress. Can you tell me about that and what it could mean for how people remember war and then the decisions they might make in the future.

Latiff: Yes, I was actually able to talk to some of the people in the defense agency who are doing a lot of this research. And much of it is really good. You’ve seen new prosthesis that have come out that are mind controlled. The flip side of that is we know enough about the brain and how to get into it that anything you can read you can write. That you could actually change thoughts.

Wood: So if you were to change a soldier’s thoughts, then they might not remember what happened in war and be all too willing to do it all over again?

Latiff: That’s correct. In fact, you can pretty much do that now pharmaceutically. And there’s been discussion of giving soldiers drugs on the battlefield to make them forget. And a soldier without guilt is really kind of scary.

Wood: So when you look at this changing global landscape of war, where does the U.S. sit? I mean, certainly we have a lot of guns and ships and nukes. But does that mean that we’re still the biggest dog in the fight?

Latiff: Well, we are the biggest dog. Our military budget by far — it’s actually larger than the next eight countries combined.

Wood: But are we the smartest dog?

Latiff: That’s a good question. And I think the answer to that is not so much anymore. What is true is that the things that we begin, and then sort of move on from, other countries, like Russia, like China, react. And it turns out that in the case of AI, for instance, China is putting an enormous amount of money into artificial intelligence and probably will exceed if they haven’t already exceeded the United States. So we’re big, we spend a lot of money, we’re good. But we’re not as dominant as we used to be.