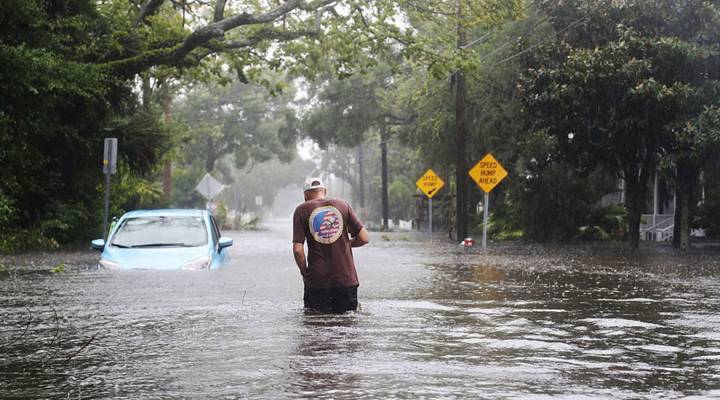 Last year, when Hurricane Matthew was spinning havoc in the Atlantic, Virginia Wasserberg’s house was spared gale-force winds, but the hurricane brought storm surge into her home.

“The entire first floor of the home suffered about 18 inches of flood water,” said Wasserberg, who lives in Virginia Beach, Virginia. Much of the loss had sentimental value. “Some items that were irreplaceable — things that were given to us from family members that had passed away,” she said. “You’re not going to recover those items again.”

But other things had clearly defined value, like furniture, electronics and appliances. Her family suffered more than $100,000 in damages. She and her husband rebuilt their home using a combination of personal savings, loans and payouts from the policy they had through the National Flood Insurance Program. For them, moving wasn’t an option.

“If you have a mortgage, like my husband and I do, and your house floods, and you don’t rebuild, you cannot collect the money from the flood insurance program,” Wasserberg said. “Then you will have to foreclose on the home and take the risk of running bankruptcy.”

Since the storm, she’s made it her mission to educate the public on flood risk in Virginia Beach, starting a community Facebook page called Stop the Flooding Now. She has since learned her house will likely flood again.

Among the laundry list of items Congress faces before year’s end is a Dec. 22 deadline to reauthorize the National Flood Insurance Program. It’s seen as an opportunity to bring reforms to the decades-old program, which has many widely acknowledged problems, including billions of dollars of debt.

The NFIP grants up to $250,000 in coverage. It’s long been criticized for how it incentivizes homeowners to rebuild in vulnerable areas, often at taxpayers’ expense, or to the detriment of others who are covered by the program in less risky inland areas.

“The problem is not that [homeowners] rebuild, but the problem is that they don’t face actuarially fair prices for insurance,” said Michael Greenstone, a professor of economics at the University of Chicago. “In that sense, the rest of us — the people who don’t live in those flood zones — are subsidizing people who want to live in flood zones.”

He said the low NFIP premiums for homes in floodplains are insufficient to cover the program’s actual costs. Then, when disaster hits, taxpayers make up the gap.

There have been efforts to end subsidies and impose market rates. In 2012, the Biggert-Waters Act stepped up rate increases for repeatedly flooded homes. It got a lot of pushback, however, and many of the provisions were repealed two years later.

“On paper it looked like an easy fix,” said Jeff Schlegelmilch, deputy director of the National Center for Disaster Preparedness at Columbia University. “You get the numbers to balance by decreasing the number of high-risk folks that you insure.”

“What happened was that people ended up [having to pay] more too quickly, and couldn’t keep up with the payments,“ Schlegelmilch said. “They couldn’t sell their house. They couldn’t transfer that wealth to anyone, which affected their own economic mobility.”

Politicians in flood-prone areas have little to gain from forcing homeowners to pay more.

“There’s not a lot of political courage being on display here in Washington,” said Jimi Grande, senior vice president of government affairs with the National Association of Mutual Insurance Companies. “There are some people, and some efforts, and some packages that would reform the program in a meaningful manner, but they tend to never win the day.”

The House of Representatives has passed a new attempt at flood insurance reform. Among other things, it again proposes rate hikes for houses that flood repeatedly. Jerry Howard, CEO of the National Association of Home Builders, said rate hikes have to be gradual, because the market for private flood insurance just isn’t there yet.

“It’s going to take time to build up the private sector presence in the marketplace,” Howard said.

The deadline to reauthorize the NFIP has already been extended more than once, and it’s possible the Dec. 22 expiration will be pushed into the new year. Homeowners are anxious to know the future of the program so they can plan continued protection for their houses.

“I’m retired, and our home is our most important asset right now,” said William Jennings, chairman of the flood committee for the Princess Anne Plaza Civic League, also in Virgina Beach. “It could be devastated and be worthless, especially if we can’t get flood insurance or if it turns out that the city is not able to engineer something to reroute the water around us or evacuate it from our area,” he said.

In the meantime, Jennings said he recently got notification from the Federal Emergency Management Agency that his insurance rates would go up 18 percent annually until it reaches market rates.

The House’s proposed bill sets a $10,000 cap on annual premiums, an amount that Wasserberg of Virginia Beach said is too much for her to afford.

Regardless of whether the Senate keeps that in its version of insurance reform, she and her family are fed up with the headaches associated with flooding risks. They put their house up for sale last February.

“My husband and I have studied Virginia Beach and coastal Virginia, and we have made the decision that coastal living is not for us anymore,” she said.