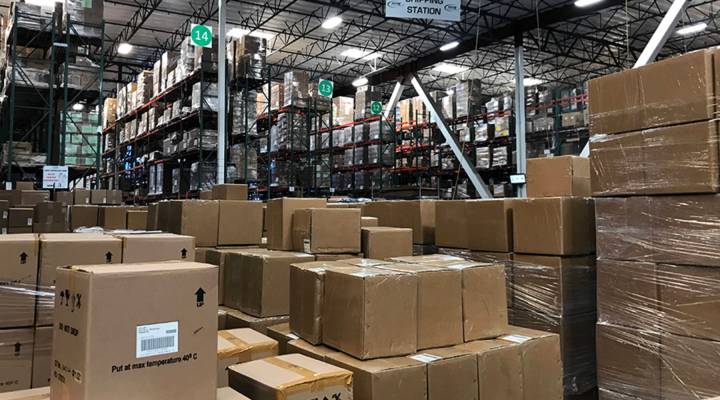 COPY
During the holiday season, orders to consumers nearly double at AMS Fulfillment Services, a company located outside of Los Angeles. Reema Khrais/Marketplace
Brought to You By

Holiday shoppers can take their time agonizing over every little detail before hitting the “buy” button, but once an online order makes it to a warehouse worker like Natalia Andrade, the clock starts ticking.

Nineteen-year-old Andrade spends her day speeding through a maze of products at a large warehouse outside Los Angeles. She grabs things like candles, socks and lipsticks, juggling nearly 25 different orders at once. Her best time?

“My best time is seven minutes, depending on how much each order is asking for,” she said.

Andrade is what’s known as a “picker” at AMS Fulfillment Services, which handles the business of more than 50 manufacturers.

Like many fulfillment centers, AMS goes into overdrive during the holiday season. Shipments to consumers more than double, which has meant longer than normal hours for Andrade.

“It was stressful,” Andrade said, referring to recent shift. “People were crashing into each other because we were all in the same aisle, going back and forth, pulling from the bins.”

“This time of the year, everything has to click right,” said Ken Wiseman, CEO of AMS Fulfillment. Wiseman has added an overnight shift, and most of his 300 employees are working overtime.

“It’s their way of also earning extra money for the holidays,” he said. “Our employees on overtime can often outperform someone just coming in and trying to learn all the skills for the job.”

When Wiseman started his company 15 years ago, almost all of the orders went to brick-and-mortar stores and shipments were rarely urgent. Now, about 90 percent of orders end up on people’s doorsteps, and those people want their plush robes and cedar-scented candles pronto.

Those companies have also helped push online shopping into the $400 billion range annually, making up about 10 percent of all retail sales, which include food, gas and cars.

And warehouse workers? Their ranks have doubled over the years to about a million in the U.S. today, said Dan Wang, a technology analyst with Gavekal.

But, Wang said, warehouses still depend mainly on people. And you can see that dependence up close at staffing firms like Atlanta-based ProLogistix, which just expanded into Long Beach, California.

The firm opened a new office to support nearby warehouses, and with current demand for workers at triple normal levels, Robin Doran, a vice president of operations at ProLogistix, has not been wasting any time recruiting workers. On the opening day, she assessed 24-year-old Jesus Garcia, who had to prove to her he could operate a forklift.

“’Cause I could easily tell her that I have four years of experience just ’cause I want that $14 an hour job, and then they send me there [to a warehouse], and I’m over there trying to learn it while I’m working,” Garcia said.

During his test, Garcia operated the machine like a pro, never even looking down at the controls.

“Someone who’s skilled in his position has a lot of choices these days versus years ago, when we had way too many people and not enough work,” Doran said. “Now, it’s the complete opposite.”

Doran said competition is forcing warehouses to offer workers more — things like free transportation, flexible hours and higher pay. According to ProLogistix, average pay is up 7 percent this year to just over $12 an hour.

“We are spending nights and days and weekends finding folks to be ready to go to work,” Doran said. “We’re just trying to get ahead of it.”

Not too much time left for that.

And once the holiday madness ends, Doran and others may have only 24 hours to put their feet up, because come Dec. 26, many of those plush robes and scented candles will be on their way back.