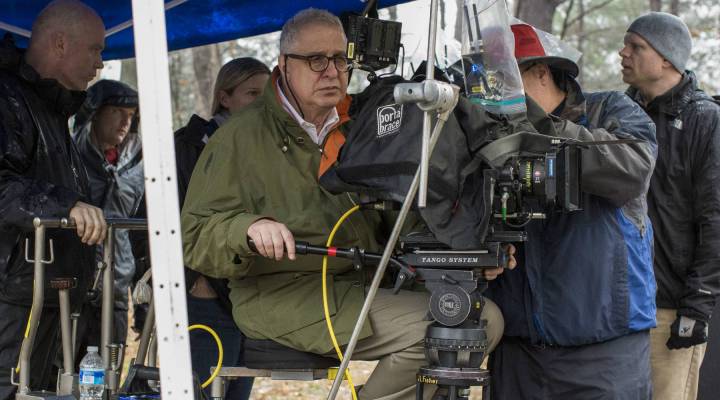 COPY
Director Errol Morris behind the camera on the set of "Wormwood." Shirin Adhami/Netflix

Director Errol Morris behind the camera on the set of "Wormwood." Shirin Adhami/Netflix
Listen Now

Director Errol Morris is known as a leader in the documentary field, directing works such as “The Thin Blue Line” and “The Fog of War.” His newest project is a six-part docuseries on Netfilx called “Wormwood.” It uses documentary and dramatized re-enactments to tell the story of Eric Olson’s 60-year quest to learn the truth about his father’s death. In 1953, Eric’s father, Frank Olson, was a CIA operative and biochemist, and as reported by the police, he either “jumped or fell” out of a hotel window. “Wormwood” is out on Netflix Dec. 15.

Morris sat down with host Kai Ryssdal to discuss the new film and his decadeslong career. The following is an edited transcript of their conversation.

Kai Ryssdal: I don’t want to give away anything in this story because it is well told, and I’ll be honest here, I’m not a murder mystery kind of guy, but it’s a well-told story. Do you think by the end of it Eric Olson has closure?

Errol Morris: I don’t know. That’s a question best addressed to him. I think not, and I’m not even sure I know what closure would be in this case there. I think he’s looking for something that may be unattainable in this life, some absolute truth, some absolute vindication, and maybe a level of recompense. But life, as we all know, is incredibly unfair and often there is no closure to anything. Except, except, and you can edit this all out please, I always thought that in the Garden of Eden, Adam may asked God about closure: “What about closure?” And God thought for a moment and said, “How about death?” Do you like that? That’s closure for you.

Ryssdal: I’m going to use a word here, and I’m going to, I just want to see how it runs by you: Docudrama. Does that do anything for you?

Morris: Mm, not so much.

Ryssdal: Really? OK. Well, it seems to me you kind of tell this in a docudrama kind of way, right? There’s a whole bunch of documentary filmmaking going on here, but then you roll in actors and dramatic storytelling and dramatization of these events. Why did you do it that way?

Morris: Well, in answer to your first question, there’s a problem with nomenclature. When you’re creating something new and something different, what are you supposed to call it? I’m not sure. There are elements of a lot of different things in “Wormwood.” I sold it originally to Netflix as the everything bagel. You get everything except raisins.

Ryssdal: I’m trying to be deferential to your experience as a, I don’t want to say a hard nose, but as a serious documentarian, right? And now you’ve gone to Netflix, which is known not necessarily for its documentaries, but for its more entertainment-focused programming, and I’m curious about that.

Morris: Actually, Netflix is becoming known for its documentaries. Ironically, although, it probably was not set up to promote the documentary form initially, it has played a very significant role in promoting and financing documentary. I am not sure anyone else would have paid for it, and I’m very fortunate to have had Netflix. I’m creating period drama here. Hiring actors, shooting all kinds of diverse material. It was in a way the most difficult project that I have ever been involved with, and no one even knew if it would work out. No one knew whether you could combine drama and documentary in this way.

Morris: Well, I liked the fact you liked it. I think it turned out well. I think it’s my best — do I call it a movie? My best film? My best series? It’s my best something.

Ryssdal: I was interested to see in watching this thing that you, and let’s back up here and say you’re the guy who invented this thing called the Interrotron, which when you’re doing, you know, documentary interviews lets the interviewee look straight at the camera but also be seeing your face. It’s a whole machine you invented. In this one though, you put yourself in the frame during your keystone interview with Eric Olson, and I wonder why?

Morris: I got tired of the Interrotron. I got tired of doing things in the same way. I still use the Interrotron, I’m still fond of the device, but this was an opportunity to do something different. One of the things that I like about documentary, and I’m not sure I like anything about it, but if there was something that I liked about it, it’s that you can reinvent the form every time you make one. That I do like. You don’t have to do things the same way. You can create something utterly different. I did it in many, many films, particularly ‘The Thin Blue Line” in the past, and I believe I’ve done it again with “Wormwood.”

Ryssdal: I think it’s interesting you say you don’t like documentaries.

Morris: Interesting in what way?

Ryssdal: I mean, you’re, if not the, then certainly one of the foremost documentarians of this generation, and now it turns out you don’t like the form.

“The Last Blockbuster”: Previewing our May documentary film selection