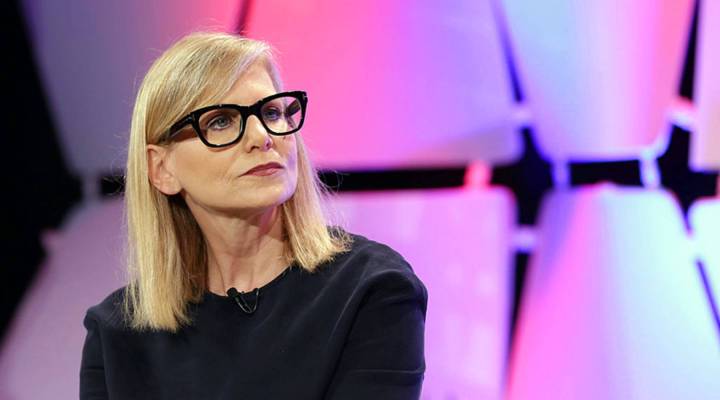 COPY
“It seems like everybody is a little bit of everything these days,” says Dawn Ostroff, president of Condé Nast Entertainment. Alison Buck/Getty Images for TheWrap
Corner Office

“It seems like everybody is a little bit of everything these days,” says Dawn Ostroff, president of Condé Nast Entertainment. Alison Buck/Getty Images for TheWrap
Listen Now

Five years ago, Condé Nast, the venerated magazine publisher, launched a whole new division that had nothing to do with print. Condé Nast Entertainment pumps out viral video content like the popular “73 Questions” series for Vogue. It’s also tasked with adapting the company’s vast catalog of print material for the film and digital-video audience. Marketplace host Kai Ryssdal sat down with Dawn Ostroff, the president of Condé Nast Entertainment, about how she does her job, how advertisers respond to her projects and how she keeps up with all the content. The following is an edited transcript of their conversation.

Kai Ryssdal: We should say, just to start, you work for a big magazine company. But you’re a TV person, and radio actually, from way back.

Dawn Ostroff: Yes, I am. But you know, these days I think we’re seeing everything merging and content migrating from platform to platform. So it seems like everybody is a little bit of everything these days.

Ryssdal: It does indeed. So what do you do in Condé Nast and at Condé Nast Entertainment?

Ostroff: So Condé Nast Entertainment was a division that we started five and a half years ago with the understanding that the landscape in the media space was really changing, and so I think they were very forward thinking in looking at how they could start to expand the content that was being written. How do we take that onto the platforms? Now in prior years, they had many movies made based on some of the articles in the magazines. But, you know, the company didn’t necessarily participate in the creative process or in the financial.

Ryssdal: Yeah, so it was the writer, right, who got the deal?

Ostroff: Yes, and the writer still does. But as opposed to outside production companies making the movies or the TV shows, we’re now involved in that whole process. And in addition to that, digital video was starting to really come to fruition, and we knew that that would be an important part of the business going forward, which it has really turned out to be. And so we also help oversee all the video content that the company makes.

Ryssdal: The challenge I guess for you now is fundamentally getting people’s attention. Right? So when you sit down with a project, what do you do to say, “Listen, we need to get eyeballs on this.” How do you do that?

Ostroff: It’s interesting, we evaluate the content to understand what the best version of it would be and where it would lend itself on which platform. So for example, when you’re looking at something that’s for television, oftentimes it’s really about the characters and the relationship because people have to come back for maybe seven years, right? In the digital video side, we really create franchises, as we call them, from scratch.

Ryssdal: Give me an example.

Ostroff: So we have a franchise called “73 questions.” We produce it for Vogue, and it’s basically taking celebrities, and while they are walking around their home, our director is asking them 73 questions. And so, you feel like you know them a lot better than you would if you were just watching somebody else interviewing them. And so all of the content we make in video, which is a lot — we make about 5,000 videos a year; we’ll do about 11 billion views this year, which is a lot of people watching content — but everything we do is from a different perspective, understanding what the viewers expectations are and speaking to them in a different way than you would if you were making a movie or you were making a TV show.

Ryssdal: As you try to meet all those different viewer demands and you go cross platform or you do whatever voodoo you do, my guess would be your advertising people go bananas because they’re like, “Dawn, we’re trying to sell it here and now you’re making us sell it here, and how are we supposed to do this?”

Ostroff: And you’re right. It’s very complex, but at the same time the advertising community are the ones who are really pushing me to find the viewers. I mean, you have to realize that you have the advertising community, who by and large has spent a lot of money on television for decades upon decades and now they want to be where the consumer, where the viewer is. And particularly the younger Gen Z and millennials are consuming now more than three and a half hours per day on their mobile device. I mean, that’s where they are watching video, more than three and a half hours per day! That’s an astounding number when you think about it. It’s the new prime time.

Ryssdal: What are you reading? How do you stay on top of stuff?

Ostroff: You know, it’s interesting. It used to be you wait for all the magazines to be released and then just, you know, dive into a two- hour read of Vanity Fair.

Ryssdal: Those days are gone.

Ostroff: It’s so much more satisfying because now you have so much information coming to you every minute of every day.

Ryssdal: Do you not feel like you’re drowning? Asking for a friend.

Ostroff: I feel like I’m drowning, but yet at the same time, I feel like the relevant pieces seem to rise to the top. At the same time, you know, that’s why you need to have balance in your life. Family life, hobbies, a little time off is really so important these days.

Condé Nast seeks a path to profitability with a global CEO