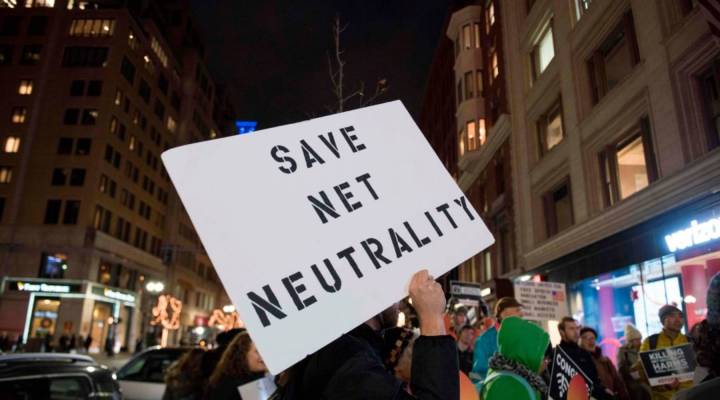 Protesters gather on Boylston Street in front of a Verizon store during a Net neutrality rally on Dec. 7 in Boston, Massachusetts. RYAN MCBRIDE/AFP/Getty Images
Listen Now

The FCC is poised to overturn net neutrality this week. One possible alternative to get online? Municipal broadband. San Francisco, Seattle, and Boston are all looking into it as an alternative to traditional internet providers. Marketplace Tech host Molly Wood talked with Christopher Mitchell, director of Community Broadband Networks for the Institute for Local Self-Reliance, a nonprofit that advocates for sustainable community development, about how city-provided internet would work. Below is an edited portion of their conversation.

Christopher Mitchell: It’s worked generally where the community is really engaged where there’s a strong need from the community for something better. And where the city has really taken it seriously, done all the research, and built out a good plan for marketing.

Wood: What doesn’t work about it?

Mitchell: The thing that doesn’t work about municipal broadband is where I think a city really faces overwhelming competition and can’t figure out how to get enough people to sign up for it.

Wood: And what are the barriers? I mean I know that different localities, some states, occasionally put up regulations, essentially, that prevent these from being built out often at the behest of the incumbent providers. What are the most significant barriers to building out muni broadband?

Mitchell: Those state laws in which about 20-some states have limited the local authority of communities to solve this problem, it’s a known goal. We really shouldn’t have that. But the barrier that I think stops most communities is one of more psychology. It’s a sense of, it’s just too big of a problem to tackle. It’s hard for elected officials to jump in and do this. And that’s something that local businesses and residents need to organize around.

Wood: Well, how much money would it cost for a city like San Francisco to put in a fiber network?

Mitchell: For a city like San Francisco, you’re looking at more than a billion dollars to connect everyone all at once. But that cost of a billion dollars is not too much different from what we put into professional sporting arenas.

Wood: Well, at the federal level, of course, FCC chairman Ajit Pai has said he wants to get rid of regulations that are keeping internet service providers from entering the market, sort of as part of this rollback of net neutrality provisions. If that happened would it help municipal broadband? Could it remove some of the barriers?

Mitchell: The only way that it would help cities and people more generally is that it would lead to more cities considering this and cities being more aggressive because the big cable and telephone companies would likely abuse their new power. But the internet will still be there behind the scenes and cities can build their own apps and get around the barriers that the big cable and telephone companies are producing.