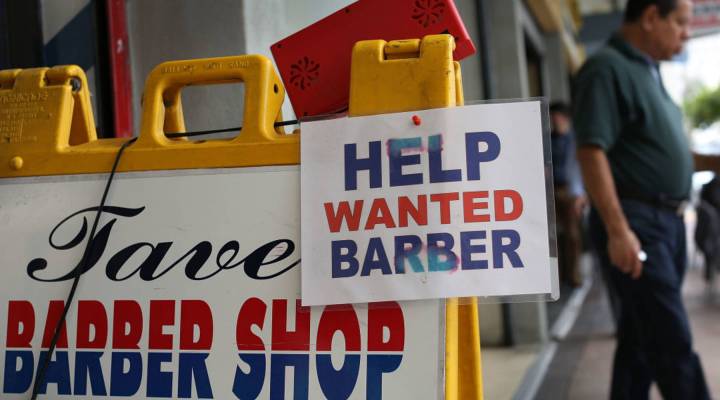 The U.S. economy added 228,000 jobs in November, the Labor Department said on Friday. The unemployment rate remained unchanged at 4.1 percent.

On average, about 174,000 jobs have been added each month this year. That’s down from average monthly gains of 187,000 jobs in 2016. Among the sectors that have added jobs over the last twelve months are manufacturing and construction. Since November of last year, manufacturing employment increased by 189,000 jobs — with about 31,000 jobs added within the last month.Construction added 23,000 jobs in November, bringing a 12 month total to 132,000 jobs.

“I do think that as the economy gets stronger, as more and more jobs are added, people will see opportunities for themselves and they will return,” said Elise Gould, senior economist at the Economic Policy Institute. “And you might actually see the unemployment rate go up a little bit right as the workers return thinking that they’re going to find something.”

With steady job creation and a declining unemployment rate, the Fed is expected to raise interest rates again next week when it meets from December 12 to December 13.

Fed Chair Janet Yellen has previously said that while the U.S. labor market is nearing full employment, she remains concerned with low wage growth. The lack of significant wage growth has often been blamed for the current low inflation rate which has puzzled economists.

In October, Yellen said that inflation was “the biggest surprise in the U.S. economy.” Over the past few years, inflation has remained well below the Fed’s 2 percent goal. However, with a tightening labor market, the Fed hopes wages  — and inflation — will pick up come 2018.

Average hourly earnings went up by just 2.5 percent over the past year.

With fewer people looking for work, employers will have to offer higher wages to attract new employees. According to a new survey from the National Federation of Independent Businesses, 52 percent of small business owners were hiring or tried to hire new staff in November, but 44 percent said that they couldn’t find qualified workers. About a quarter, 27 percent, of small business owners said they raised wages and 17 percent said they planned to increase wages in the coming months.