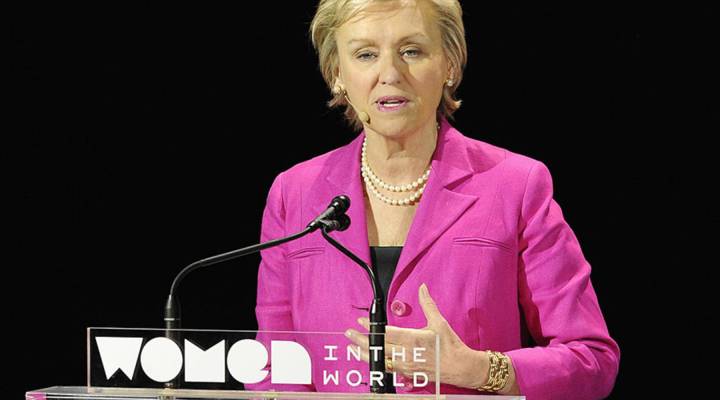 COPY
Tina Brown speaks at the Women in the World Summit in 2015 in New York City. Andrew Toth/Getty Images

Tina Brown speaks at the Women in the World Summit in 2015 in New York City. Andrew Toth/Getty Images
Listen Now

Vanity Fair has not always been the iconic, pop culture and current affairs magazine we know today. Thirty-five years ago, Vanity Fair was a floundering reboot of a magazine from the 1920s and ’30s, trying to find its voice, trying to get advertisers and trying to be profitable.

Condé Nast, Vanity Fair’s parent company, found all three in Tina Brown. She was the editor-in-chief of Tatler, a British magazine, before she was hired to lead Vanity Fair in 1983. She wrote about her time at Vanity Fair in a diary, and she has published those entries. Marketplace host Kai Ryssdal talked with Tina Brown about her book, “The Vanity Fair Diaries: 1983-1992.” The following is an edited transcript of their conversation.

Kai Ryssdal: There is a lot in this book to hash over, which we will do in due course. But I want to talk about an idea that ran through this book, at least as I read it. And it was the idea of America. You like this country and you liked it long before you came.

Tina Brown: I did. I always had this big daydream when I was living in London working as a young editor at Tatler, I took over at 25, but to me America was always the big time. You know, I always thought this is where the action is. And I wanted to be here, badly, because, you know, I’m a girl of the arena. I want to be out there with the action.

Ryssdal: You brought up your age, so I don’t feel bad jumping off that question. You were, like, 30 years old when you took over this magazine. I mean, you were a child!

Brown: You know, now it just seems very young. At the time, I felt more than ready having spent that time in London editing Tatler. But when I took over Vanity Fair, it was so enthralling, it’s such an extraordinary time because not only was I just turned 30, but, you know, I really didn’t know many people in America. And, you know, it was the time of the Reagan ’80s, when it was all “Miami Vice” and Madonna, and, you know, “Dynasty” — and at the same time, that crazy black-tie world of the Reagan White House, that, you know,, at a certain echelon of society, which was Vanity Fair’s meat, was throbbing away at the same time.

Ryssdal: Well, you know, it’s funny, you fess up early in the book that this was — well, here’s what you say: “These were years spent amid the moneyed elite of Manhattan and L.A. and the Hamptons in the overheated bubble of the world’s glitziest, most glamour-focused magazine publishing company, Condé Nast, during the Reagan era.” You were having a good time.

Brown: Well, you know, I was always an observer at the feast —

Ryssdal: Oh, no, no, no. Come on, you were at the feast. There are more dinner parties and cocktail parties and drinks and you name it in this book than I can count.

Brown: Oh, I was totally at the feast. I was totally at the feast. But I always kept my beady eye going. Very often when I went out, amazing things happened. Like one night, I went to a fundraiser to raise money for suicide survivors. And William Styron, the writer, got up and started talking about his depression. And I went over, and I asked him to write a piece for Vanity Fair. And he did, he agreed. And he wrote this amazing piece that we called “Darkness Visible” about his chronic depression, which caused the most enormous reaction and it’s hugely helpful to people who’ve suffered. And he went on to write a best-selling book about it, so very often going out was the way I got material.

Ryssdal: It takes until about 300-ish pages into this thing until you talk about being a woman in New York publishing in the 1980s. Why’d you wait so long?

Brown: Well, actually, that’s not so. I mean, the theme throughout really is of a young woman, sort of, learning how to be a boss.

Brown: A lot of what that book is about is learning how to run things, learning how to be a boss, learning how to persuade people to do things. And I think another thing really is getting the management to kind of take me seriously from my strategies because I did many things for Vanity Fair, like turning it around, making it a success, and, for instance, launching a British edition. All of these things were really business strategy, which never was quite understood as that. The management tended to say, oh, kind of, the equivalent of “Don’t worry your pretty head about the business side and just focus on the editorial side,” but actually, a good editor has to be a part of all of that. And I did do all of that at Vanity Fair and sometimes felt that, you know, one had to fight to get heard.

Ryssdal: A word here, actually, about women and something you said earlier. You know, this idea of being a woman in the working world in New York City in the 1980s. And now what you’re doing with your conferences and then, of course, the moment we find ourselves now in this country. You must have seen that coming?

Condé Nast to put all of its magazines behind paywalls