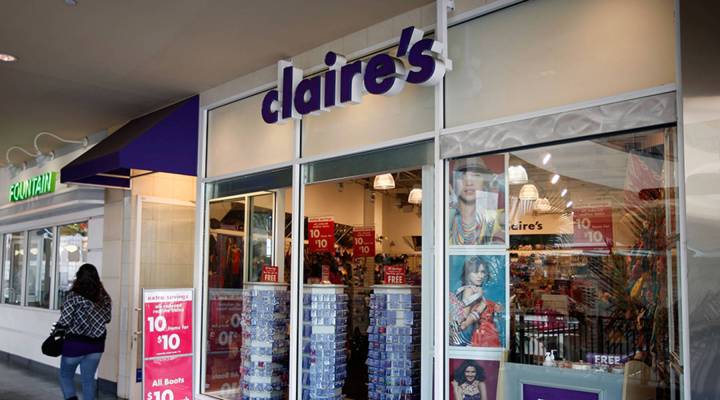 Walk into Claire’s with $20, and you’ll step out with sterling silver hoops, rhinestone studs, and maybe even a fashionable scarf. The retailer’s claim to fame has been cheap and cute accessories for its customers, mostly tweens and twenty somethings meandering through malls. Its primary model has been simple: to draw upon the foot traffic from popular mall department stores like Macy’s, Sears, and J.C. Penney.

“At one point Claire’s boutiques was one of the most successful chain stores ever in the history of America,” said Howard Davidowitz, chairman of the retail consulting and investment banking firm Davidowitz & Associates.

Claire’s once boasted one of the highest returns on investment for a specialty retail chain, he added. The company currently has more than 2,600 stores across the world and more than 900 concession stands providing accessories and ear piercings.

The chain reached its height during a time when malls were hubs for commercial activity. But with major retailers closing more stores and competing online, Claire’s has taken a major hit.

In 2007, the chain was acquired by private equity firm Apollo Global Management in a $3.1 billion leveraged buyout which, according to Davidowitz led to crippling debt.

“They went from being the best to being nonviable over a 10 year period,” he said.

The retailer hasn’t been able to pay off its debt interest for more than four years now according to Moody’s Investors Service. The company is now one of the lowest rated retailers, said Moody’s lead retail analyst Charlie O’Shea. He said there is a high chance the chain may default.

Claire’s doesn’t have the financial flexibility that it needs to succeed in the current retail environment, explained O’Shea.

The chain’s debt is its biggest obstacle toward re-envisioning its model. It simply does not have the funds to invest in its advertising campaigns and store design as other suffering retailers do.

Claire’s may face stiff competition from other discount retailers, but it does have one advantage — no other chain has cornered the ear piercing market.