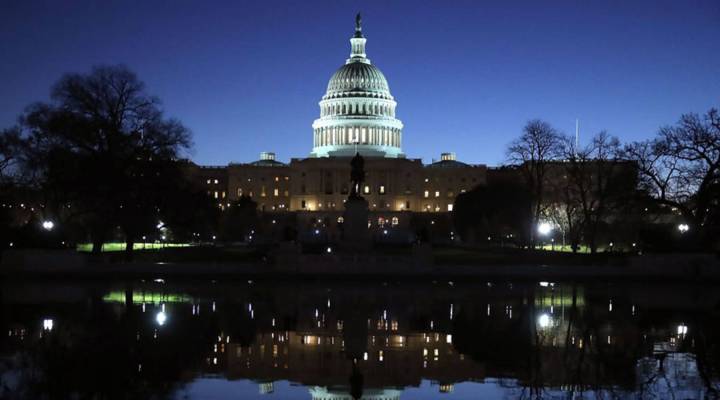 This is not your average Thursday night in Washington. Hundreds of  people in tuxes and sequins have poured into the National Building Museum and paid $750 a head to drink champagne and rub elbows with the who’s who of the tax world.

This is the tax prom, one of the main events in what has become a packed season for Washington’s tax elite. Congressional staffers are here, plus CEOs, lobbyists and plenty of policy wonks from think tanks like the Cato Institute and the Committee for a Responsible Federal Budget.

Congress is in the middle of a tax overhaul that is a slog for many people involved. The process is long, sometimes boring, often incredibly detailed and difficult. For some, though, this is their moment. As Congress tries to get a tax plan passed, think tanks in Washington are tripping over themselves to get their ideas into the mix. And they’re having fun doing it.

“It’s a little crazy. Very hectic. I don’t know that I could handle much more on my dance card,” said Lynda Walker, executive director of The Tax Council, a nonpartisan group that helps Wall Street make sense of Washington.

Walker said between briefings on Capitol Hill and tax events morning, noon and night, she’s lucky to get four or five hours of sleep these days. And time off?

“I was just on the phone with my mother, asking when I was going to be home again,” she said, laughing.

Tonight’s likely to be a long night. In addition to the usual drinks, dinner and talk of deductions, Vice President Mike Pence will speak and rally this mostly conservative crowd.

Down the hall, David Williams is holding court by the bar. He’s already pretty excited. He’s been waiting for this moment for 25 years.

“This is my Woodstock. This is my Lollapalooza,” he said. “This tax reform time is — this is it. This is what I was born for.”

Williams heads up the Taxpayers Protection Alliance, as in protect people from paying more taxes. It has members across the country. Williams is looking to educate them, recruit their friends and whip up grassroots support.

“Really just making sure that our members know what’s happening in D.C. and that they’re not overrun by news that, you know, they don’t understand,” he said.

Williams said half the battle is just trying to keep up with all of the changes to the tax legislation. Shannon Salzman is trying to keep up, too. She’s the event planner for the Tax Foundation, host of tonight’s shindig.

She said the foundation is holding twice as many events as usual.

“Some of them have doubled or tripled in size,” she said. “It’s a lot.”

That’s saying something, considering everybody in the thinking business has a viewpoint to sell these days. Saltzman uses a time-honored strategy to lure people to her events: Food.

“Lunch is the easiest time to get people,” she explained. Her secret weapon? Chick-fil-A. “If we can’t get Chick-fil-A, we will often work with the Senate’s catering house,” she said. “A nice sandwich spread. Just general lunch food.”

Saltzman said it’s all about cashing in on this moment when thinking big tax thoughts can really build your business.

“We’re ready to grow, and we want to make sure we take advantage of the relationships that we are making that we have made,” she explained.

There are roughly 400 think tanks in Washington, and they’re all pretty much trying to take advantage of this moment. Like the people here.

That’s quite a change from a year ago, said Jim McGann, head of the Think Tanks and Civil Societies Program at the University of Pennsylvania.

“Many think tanks, for the first couple months, were in disbelief and in a fetal position, uncertain as to how to respond and what they might do,” after the presidential election, McGann said. Now they’re busy trying to interpret President Donald Trump’s particular approach to governing on particular issues. “From the marketing standpoint and business side, it’s easier to communicate in a crowded market what you do, if you specialize.”

And it never hurts to get your fast food order in early.