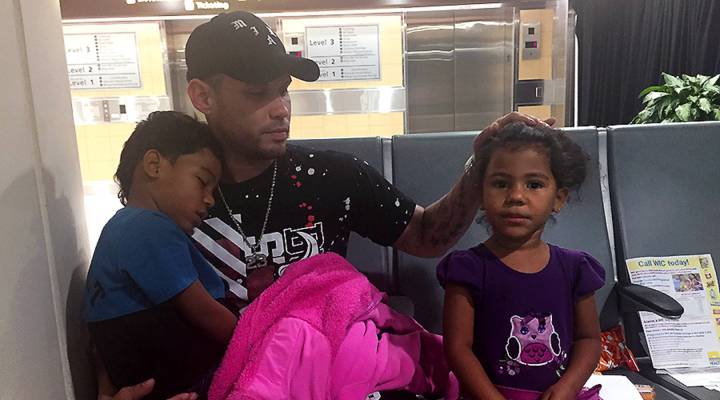 Jonathan Gonzalez sits in front of a curtained-off section in the lobby of Orlando International Airport with his seven-year-old daughter asleep at his feet. His five-year-old son is stretched out on a row of chairs, and his toddler is in his arms. The family’s belongings — a suitcase, a large sack, and some colorful book bags — are piled up on a luggage cart. A few feet away, a welcome sign greets a steady flow of people to the official Hurricane Maria Relief Center.

Gonzalez and his family rode 12 hours in a car to get to the center from Memphis, Tennessee. The family has camped out for three days in the lobby, figuring out their next steps.

He would prefer to start a new life somewhere cheaper than Florida. But he and his wife need to earn money here before they can do that, and find a place to stay in the meantime.

Chronic unemployment drove 28-year-old Gonzalez away from Puerto Rico about a year ago. He had moved, without his family, to Memphis where he worked odd jobs and stayed with a friend. His wife and children rode out Hurricane Maria in the coastal town of Fajardo and, after weeks without power and water, he used what money he had to bring them to the United States.

Gonzalez did not have enough space to welcome his family at his friend’s house, so they checked into a motel but they could only afford it for a week. They decided their best bet was to pay a driver for a ride to the nearest official Hurricane Maria Relief Center in Orlando, one of three in the state.

About 170,000 people have evacuated Puerto Rico for Florida, according to state officials. They are living in all kinds of places; some with family members, some in hotel rooms paid for by the Federal Emergency Management Agency, and others sleeping overnight in cars, or like Gonzalez and his family, sleeping at the airport.

“This is really not like anything we’ve seen before,” said Viviana Janer, commissioner for Osceola County, home to the largest concentration of Puerto Ricans in Florida.

Before Maria hit she said about 1,000 Puerto Rican families were arriving each month, fleeing chronic unemployment on the island. And before Maria hit, affordable housing was already an issue for central Florida. She said last year, 11,000 people applied for just 200 Section 8 subsidized housing vouchers.

“Our number one industry is tourism, service-driven — and so, the wages have not quite kept up with either renting or buying a home. Conversations have to take place as to what can be done,” she said.

Puerto Rico has requested $94 billion in federal funds to restore the island after Hurricane Maria, but for many evacuees, housing help from FEMA in Florida is the only immediate fix.

So far, the agency has placed families in more than 1,500 hotel rooms as part of its transitional shelter program, with thousands more expected to apply.

FEMA can’t solve the long-term housing crisis but Florida’s affordable housing trust fund can, said Rep. Darren Soto. He points to more than $300 million earmarked for the cause.

“It could be to encourage builders to build a bunch of apartments where you can have rent between $800 to $1,200 a month, which seems to be about what people can afford,” he said.

For years, Florida has dipped into its affordable housing trust fund to pay for other things. But Soto said the influx of new arrivals means those dollars should now be spent as originally intended.