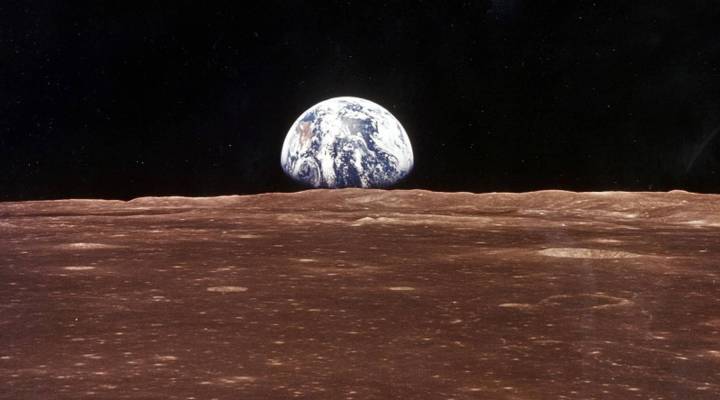 A view of Earth appears over the lunar horizon from Apollo 11 before astronauts Neil Armstrong and Edwin Aldrin Jr. made their historic moon walk. Photo by NASA/Newsmakers
Make Me Smart With Kai and Molly

A view of Earth appears over the lunar horizon from Apollo 11 before astronauts Neil Armstrong and Edwin Aldrin Jr. made their historic moon walk. Photo by NASA/Newsmakers

Science fiction novelist and computer programmer Andy Weir wrote it himself in an explanation of the moon city Artemis, where his new book takes place: “Nobody reads sci-fi for an economics lesson.” But a supplementary economics lesson is what he published to show that the world depicted in “Artemis” does, in fact, make sense. His findings haven’t been vetted by real economists, but he does say his latest book is more scientifically accurate than his debut novel, “The Martian.” As he told Molly Wood, “I just used Google because the space world is incredibly well documented.” His Google-fueled findings present a thorough look at the world of Artemis and also offer a few insights into today’s commercial airline and fledgling commercial space industries.

Approximately 16.5 percent of your airline ticket goes to fuel

Exact numbers on how much of the price of your airline ticket goes to fuel aren’t available, so Weir did a rudimentary test comparing different airline prices and the cost of fuel and found that it checked out (with his small sample size.)

This is an important number to have because the economy of Artemis rests on the big assumption that the commercial space industry of the 2080s, when the book takes place, will settle down to the same fuel-to-overhead ratio as the modern airline industry. This number allowed Weir to calculate the total approximate cost of the journey to the moon and brings us to our next point.

A commercial space industry is possible, and it will rely on tourism.

The current cost of rocketing into space is astronomical, though two “mystery space tourists” have allegedly signed up with SpaceX, according to Elon Musk. Weir uses the information above and also another assumption — “that the price for tourism can be driven down to the point that ordinary people can afford it” — to assess how in half a century the price could approach affordability. Here’s Weir writing about it for Business Insider:

The cheapest way to get mass to LEO (at the time of this writing) is with a SpaceX Falcon 9 booster. They charge $61.2 million for the launch, and it can put 13,150kg of mass into LEO. So right now, that means it costs $4,653 per kilogram.

The pricey part of anything space-related is getting it to space in the first place. It’s incredibly expensive to put mass into LEO (Low Earth Orbit). And if you want to put something on the moon, you have to get a whole ship into LEO that can then travel to the moon. If that impediment were removed, or greatly reduced, we’d have a thriving space tourism industry. My belief is that we are already on track to a commercial space industry that will do just that.

People cost twice as much to ship as cargo

Another fact of present-day life Weir uses to calculate space travel costs in the future is the price of shipping cargo, which for 200 kilograms costs the same as it does to send a person. This makes the cost of shipping cargo in Artemis just $35.10 per kilogram. This is an important number not only because of how much cheaper it would be to ship cargo into low Earth orbit in the future than it is now, but because in order to get people from LEO to the moon (in the world of “Artemis”), you would need to build space hotels in ballistic orbit. And at that cost of shipping, “the mass of the hotel wouldn’t be too much of a financial burden for whatever company built it.”

Are such advances reasonable? Well, “Artemis” takes place in the 2080s, which is over 60 years from the time of this writing. Consider the advancements in the aviation industry from its beginnings in the 1930s to the 1990s. Yes, it’s possible. When enough money is up for grabs, anything’s possible.

We were so fascinated by the world of “Artemis” that we doubled down on Andy Weir this week, with a discussion about the economics on Make Me Smart and an interview on Marketplace Tech, embedded above. Plus, we also wanted to give you a sneak peek of the book, so you can read an excerpt below.