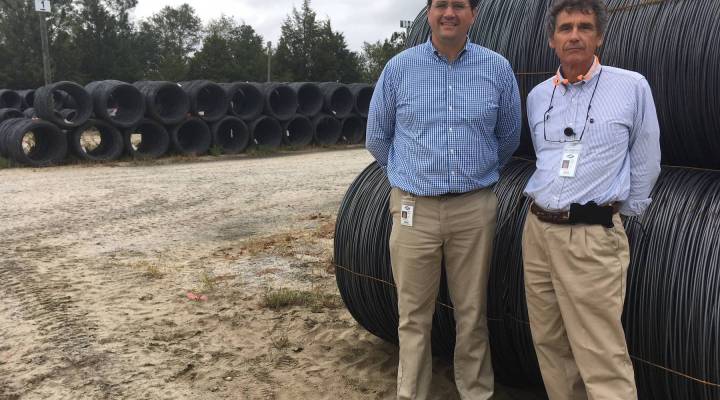 COPY
Right to left: MAR-MAC INC. CEO John Martin and his son Jarrett Martin use raw steel produced in the U.S. and abroad at the plant in McBee, S.C. Alexandra Olgin/ for Marketplace

Right to left: MAR-MAC INC. CEO John Martin and his son Jarrett Martin use raw steel produced in the U.S. and abroad at the plant in McBee, S.C. Alexandra Olgin/ for Marketplace
Listen Now

At MAR-MAC INC. in the small town of McBee, South Carolina, robotic arms coil 335 feet of steel wire into a roll four-and-a-half inches in diameter.  It is then dropped onto a conveyor belt. Where workers package it into boxes.

This rebar tie wire is the core of MAR-MAC owner John Martin’s business.

“Anytime you build a bridge, a dam,” he said, “you may very well be using our rebar tie wire.”

On this day, about two-thirds of the raw steel the plant is using is from U.S. steel mills – the rest was imported at a lower cost. Some of the steel Martin uses is from the countries the Commerce Department recently found were exporting alloy steel wire at an unfairly low cost. If the U.S. International Trade Commission agrees with the department’s preliminary finding, the U.S. could start taxing those imports. There are dozens of other similar investigations in the works. President Donald Trump has the power to raise tariffs on steel from other countries, without Congressional approval. Martin said he worries if the president exercise that power, it could hurt his business.

“If all of a sudden there are tariffs on our raw material, we know that prices will go up,” he said. “But we really don’t know what all the results will be.”

That’s because the president could do a variety of things under a trade law that allows him to designate cheap steel imports as a threat to the country’s national security. That’s only been used twice since the 1980s. Martin just isn’t sure what to expect.

“Businessmen thrive on predictability,” he said.

John Ferriola also wants to know what future steel prices will look like. He’s the CEO of Nucor Corporation, one of the largest steel producers in the country. He wants the president to take action, though he won’t specify whether he would back tariffs on foreign steel. He said he wants the president to do something to “meaningfully adjust imports.”

Based on what the president said earlier this year, Ferriola was hoping there would’ve been some action by now. Nucor has a few connections to the White House. Its former CEO was an adviser to Trump and Ferriola was on the president’s manufacturing council – before it was disbanded. Ferriola is concerned about the 20 percent increase since last year of steel imports to the U.S. sold by his foreign competitors.

While manufacturers like MAR-MAC see foreign imports as a way to keep prices competitive, Nucor has filed numerous petitions with the Commerce Department and U.S. International Trade Commission to counteract what it sees as unfair trade practices.

“We call it whack-a-mole,” Ferriola said. “You finally beat one down another one pops up and it’s just an endless process.”

But if the government imposes tariffs on imported steel, it could lead to similar requests from manufacturerswho use steel in their products. That’s according to trade economist Chad Bown with the Peterson Institute for International Economics.

“They could be the next industries that come forward and say ‘hey I want to file my own case to stop imports from coming in from the products I make and have to compete in the American market for,’” he explained.

No matter what happens it will have a big effect on the American economy. According to the American Iron And Steel Institute, the industry directly supports more than 140,000 U.S. jobs.