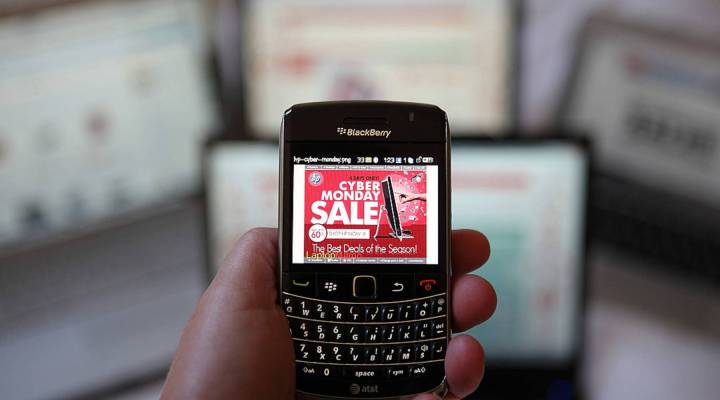 According to a new study by PayPal, people will spend an estimated $630 billion during the holiday shopping season. Marketplace host Molly Wood sat down with PayPal President Dan Schulman to discuss Cyber Monday shopping and the rise of mobile payments this shopping season. Below is an edited transcript of their conversation.

Molly started off by asking about how retailers are preparing for the the big weekend.

Molly Wood: But online shopping overall is still a relatively small number of overall retail sales, right? I read a Morning Consult poll that said that most people, actually by a small majority, still do want to shop in stores, even millennials. So when you look at the sort of e-commerce landscape, what do you think the future really is of Cyber Monday versus Black Friday?

Schulman: Today in the U.S., somewhere between 10 and 12 percent of overall sales are done online and mobile. But if you look at countries like China, you can have as much as 70 percent of all commerce done through the mobile phone. In fact, in many ways, the United States is a laggard in digital payments. So as I look forward, I think you’re going to see more and more payments move towards digital. For instance, today if you order ahead online and go to a restaurant, skip the line and pick up that sandwich, and then you just walk out because you’ve already paid for that online — was that an online transaction or an offline transaction? In fact, it was a little bit of both, and I think what you’re going to see is that mobile is going to blur and even eliminate the distinction between what we think of today as two separate things: online and in-store shopping. They’ll actually become one and the same.

Wood: Let’s talk about the payments landscape overall. Obviously PayPal had great third-quarter numbers. Venmo is becoming a bigger part of the business. But there is a lot of competition brewing. Everyone seems to have woken up to payments, including Apple and Alphabet among them. I assume Amazon must be looming. What do you think when you look around that competitive landscape?

Schulman: I think that this is a market that is exploding. The online mobile payments marketplace today is about $3 trillion around the world. In the next three years, by the end of 2020, that’s expected to go over $8 trillion. So this is an exploding marketplace. There will be no one winner in this. It is one in which many players will succeed. We have a number of competitive advantages and I think as long as we continue to focus on what consumers and merchants need and not anything else, I think we’ll remain a market leader in this.

Wood: Now don’t spoil anything necessarily, but what are you going to be shopping for? What are some of the hot-ticket items?

Schulman: Well one of the things for sure that I’ll be doing is using Paypal to donate to different causes. I think one of the more uplifting statistics that came out of our study was that 53 percent of all people we surveyed said that they will make an online donation this year and and 44 percent of Americans said they plan to donate this year during Giving Tuesday.