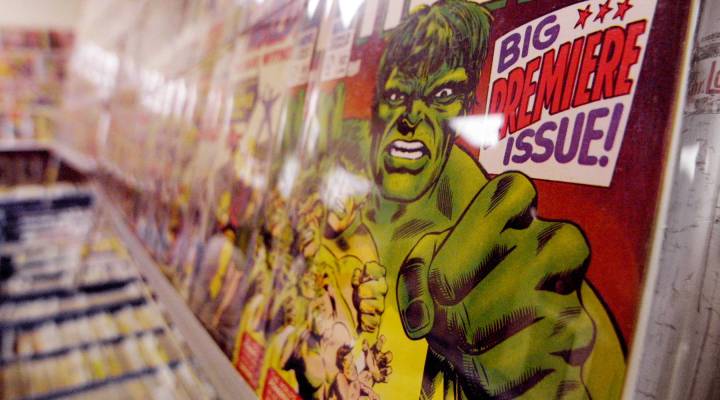 Looking for a holiday gift for your favorite comic nerd? Well, the first ever Superman comic, “Action Comics” No. 1 is set to be auctioned next month.

That’s enough to turn heads, but overall comic sales are down about 20 percent from this time last year. It’s the latest in the saga of a fantastical industry that has seen its share of battles, both on the page and in its industry.

Author and journalist Dan Gearino decided to follow the comic industry’s origin — from the first stores to today — and look at how they’re trying to adapt to a new audience. His book, “Comic Shop: The Retail Mavericks Who Gave Us Geek Culture” chronicles that journey. He joined Marketplace Weekend host Lizzie O’Leary to talk about what he found in the process. An edited transcript of their conversation follows.

Lizzie O’Leary: When you talk about this business model, and sort of the weird characters and the specifics of it, how did the physical shops start, when we’re talking about, say, the 1970s?

Dan Gearino: Within the world of comics, whenever you start talking about the first of something you’re just — it is just this invitation for this kind of knockdown, drag out debate. But in 1973, is this this watershed moment. Until then, comic shops, they were buying them through the existing newspaper and magazine distribution system. For the first time there was an entrepreneur who set up a system specifically for supplying comic specialty shops.

The guy who set this up in 1973, he was named Phil Seuling. He went to the big publishers like DC Comics, Marvel Comics. He got them to agree to this system in which he would actually act as kind of the middleman. Where you could order a specific quantity of something, it wasn’t just this kind of catch as catch can system, like the way it worked if you went to a newspaper stand or a magazine stand.

O’Leary: Yeah, this is a very like kind of tailored supply and demand equation, where the shops are getting exactly what their customers want. I’m so fascinated by this because it, it’s really very different from, kind of, traditional retail distribution.

Gearino: It is. Now with the comic shop market, if they order 50 of something because they’re confident that their customers are going to buy it and they only sell 5, they’re stuck with the remaining 45. It’s a non-returnable model, which despite many changes since then, has kind of, in terms of the central architecture, it’s largely the same.

O’Leary: You use the word “heyday” to describe the sort of 1980s comic shop flourishing. Why “heyday” and who was buying these things then?

Gearino: I call it the heyday because this was when the second generation came in. That second generation, which you start to see in the late 70s and early 80s, are people who grew up going to the conventions and going to those early stores. And they tended to have a little bit more business savvy. A really good store leads to other good stores. And this led to and contributed to all of these independent comics. And you’d have these things like “Teenage Mutant Ninja Turtles” in the mid-80s, like “Elf Quest” in the late-70s. These independent titles that would just kind of bubble up. It’s a real creatively fertile period.

O’Leary: Well so how did things then get to a crisis point in the 1990s when stuff kind of blew up?

Gearino: There’s this constant tension in comics between the idea of being a reader, reading and enjoying and appreciating a comic, and being a collector — buying a comic with the thought that you’re going to sell it down the road and put your kids through college. And there was this idea that if you bought 50 copies of something you could, you know, you could sell it for 10 times of what you paid for it. It was utterly unsustainable. The kind of key moments in this run up toward the crash — one was the death of Superman. People hadn’t seen something like that before, where it was you know supposedly this permanent change. And it sold out instantly. It sold out almost everywhere the day it came out. And what that did for retailers, and for buyers, it taught them, “my goodness, the next big thing, I need to make sure I get it.”

The problem was that, you know, six months or so later after the death of Superman, you have the rebirth of Superman. The return of Superman. He’s back and he wasn’t dead after all. In the end, the story where he comes back, he’s actually kind of fighting his way back through the afterlife. In that comic, the one where Superman comes back, many retailers will say that’s the one that led to the crash. That was kind of the 1929 moment where, after feeling kind of burned by the death of Superman, because they under ordered, they ordered that rebirth of Superman like crazy. And they had tons and tons of copies left over.

As often happens when you hit a cyclical downturn, the businesses, the publishers and to a certain extent the retailers, they took on a lot of debt and it led to this just utter crash by the mid-90s.

O’Leary: You know, I remember going into a comic shop in D.C. where I grew up to buy a present for a friend of mine who was, you know, a big fan. And I was a teenage girl. It was really intimidating. The guys were kind of gruff. I didn’t really know what I was doing in there. Has that model changed as the business has reborn itself a little bit and tried to find a new audience?

Gearino: One of the most interesting things and one of the most powerful dynamics that’s taking place in comics today, is a diversification of the audience. The best stores almost all have some female staff. The best stores have a really good kids section right inside the door. The best stores are not just these kind of clubhouses for men over the age of 40, which is, which would describe, I think, a lot of the worst stores.

O’Leary: You know, when we think about the sort of larger universe right now, obviously there have been a gazillion Marvel and DC movies. “Black Panther” is coming out. And I guess, I’m curious whether there is any business overlap between the pop culture saturation that we’ve got, on the one hand, with the Hollywoodificaton of comics and the really die-hard folks who are running these stores? Or are these totally separate universes?

O’Leary: There is a line near the end of this book from Joe Field who runs a store in California, saying “we are the cockroaches of pop culture” about comic shop owners but he means it in this good way. Like, survive the nuclear holocaust kind of way. When you look forward, will the cockroaches survive as a business model? Or is there something else out there that threatens them?

Gearino: A lot of the good retailers, they have, kind of, an apocalypse plan. You know, they’ve got the equivalent of the bomb shelter. The really good retailers have thought about this. And they’ve thought about if I’m an 8 year old who has grown up reading comics now, or has read comics as long as I’ve been reading, that’s going to be an adult customer in 10 years. And the retailers that are going to survive are the ones that can appeal to that person.