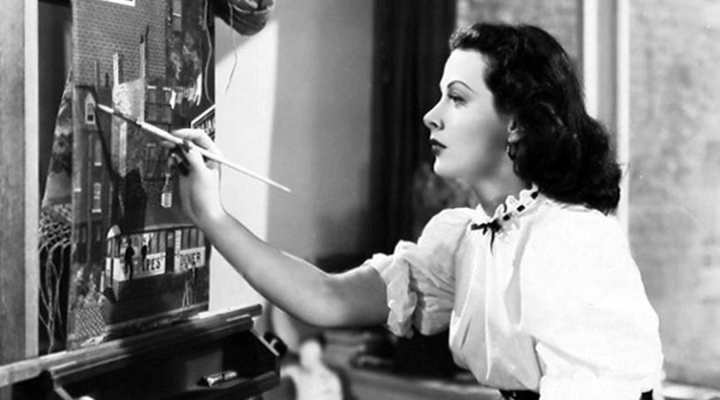 Hollywood actress Hedy Lamarr, “the Angelina Jolie of her day,” was also an avid inventor and the person behind advances in communication technology in the 1940s that led to today’s Wi-Fi, GPS, and Bluetooth.

Alexandra Dean is the director and producer of a new documentary about Lamarr called “Bombshell: The Hedy Lamarr Story.”

“People thought she was way too dazzlingly beautiful to have come up with some brilliant idea,” Dean said. That brilliant idea was called frequency hopping: a way of jumping around on radio frequencies in order to avoid a third party jamming your signal. Lamarr invented it in the 1940s for use as a secret wartime communication system that could keep the enemy from interfering with a ship’s torpedoes. She got a patent for it in August 1942, and then donated it to the U.S. military to help fight the Nazis.

“When she gave it to them, [the Navy] said, ‘What do you want to do, put a player piano inside a torpedo? Get out of here!’ And so they didn’t use it during the Second World War. It was after the Second World War that it emerged as a way of secretly communicating on all the gadgets that we use today,” Dean explained.

Hedy Lamarr in a publicity photo for “The Heavenly Body.”

It took decades for Lamarr to receive any recognition for her incredible invention. Finally, in 1997, she was honored by the Electronic Frontier Foundation, but, Dean said, it might have been too late for Lamarr to appreciate the standing ovation she received over 50 late. “The film is bittersweet because at the very end of her life, when she’s very old, she starts to get this incredible recognition … from the Navy, from the Army, from the Air Force … But, unfortunately, at that point she’d become a recluse. She wasn’t leaving her house. She sent a recording of herself thanking them. So she wasn’t able to stand up and receive this very delayed applause.”

During her heyday, Lamarr was considered the most beautiful woman in the world. Her face was the inspiration for Disney’s Snow White and for Catwoman.

She was a famous Hollywood star who would finish performing on set with Clark Gable, Jimmy Stewart, and Spencer Tracy, and then go back to her trailer and work on her inventions.

Hedy Lamarr and Clark Gable in a publicity photo for the film “Comrade X.”

Like many famous stars of her day, she had a relationship with aerospace pioneer Howard Hughes. According to Dean’s film, it was more cerebral than romantic — she helped him streamline his aircraft design.

In rare, long-lost cassette tapes from the 1990s, Lamarr describes her contributions to aerospace engineering: “I thought the aeroplanes were too slow. I decided that’s not right. They shouldn’t be square, the wings. So I bought a book of fish, and I bought a book of birds, and then used the fastest bird, connected it with the fastest fish. And I drew it together and showed it to Howard Hughes and then he said, ‘You’re a genius.'”

That genius extended to her business sense as well. What makes Lamarr seem “like somebody living among us today, that accidentally wandered into the past,” Dean said, is her entrepreneurial spirit. Lamarr started her own production company in 1946, the only person beside Bette Davis to do so at the time. And only Lamarr was successful.

Lamarr was a complex individual who was famed in Hollywood for her beauty, but Dean said her looks won’t be her enduring legacy. “The truth is more complicated than that … I really do think that changing the way we all communicate today, and being recognized for that finally, will be her legacy.”

“Bombshell: The Hedy Lamarr story” will be out in the IFC Theater in New York beginning the day after Thanksgiving.