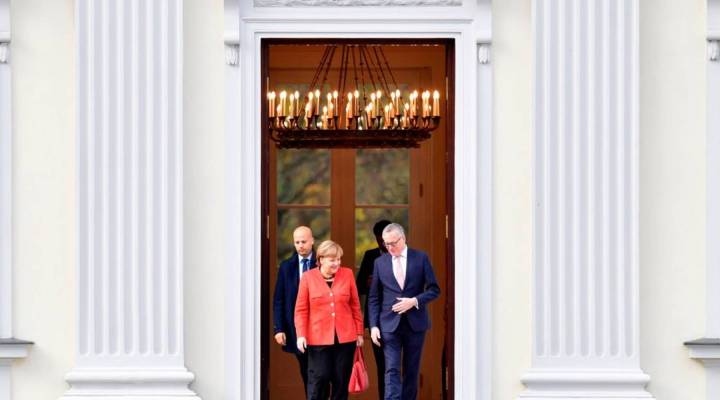 Germany still has no government. The leading party of Chancellor Angela Merkel, the Christian Democratic Union, has been unable to form a coalition with rival parties for control of the parliament as is customary in German politics. Marketplace host Kai Ryssdal talks with Eric Graydon, a business reporter based in Berlin, about the ramifications of this development for the rest of Europe.

Kai Ryssdal: This is obviously a political story but there is—there are rather— some some fundamental economic issues behind it right?

Eric Graydon: Sure. Well I mean, economics are a massive problem here and obviously that was one of the factors that was also kind of palpable during the elections. Obviously a lot of the publicity around the various parties that we’re contending and especially the rise of the AfD [Alternative for Deutschland Party] was about Merkel’s migrant policy, but behind that is the sense of economic injustice and certainly that is still a big factor here.

Ryssdal: The fallout probably won’t be seen for a couple of days. There hasn’t been much movement in the markets or the exchange rates. And while there will be some time to let this thing settle out, walk me through what happens if there cannot be a coalition formed, then what?

Graydon: Well, I mean the basic problem is that anything that requires government coordination, policy decision, just won’t happen and that will slowly but surely start to manifest itself as an economic factor. We have to obviously remember that the fundamentals in Germany are very very strong. Unemployment here is as low as it’s ever been so the levels at which we currently stand are very promising and are also very forgiving in terms of, you know, a delay in political decision making. But obviously at some point that will be a problem.

Ryssdal: Talk to me about the pan-European issue here, right? I mean what does this mean for President Macron? What does it mean for the Italian economy, and some of the rest of them, who have been factors in Europe’s economy in the past couple of years?

Graydon: Well basically, these countries will face a period of prolonged uncertainty. Especially if we look at the example of Emmanuel Macron. Two days after the German election he laid out ambitious plans for Europe. He wanted to create a European finance ministry. None of this can happen until there is a German government that is actually capable of making these sorts of decisions and, importantly, has a mandate to make those decisions. As yet, we don’t have that and that will be a problem for the whole of Europe.

Ryssdal: Just to be clear here, Chancellor Merkel has said she prefers new elections rather than trying to hobble along with minority government right?

Graydon: Well yes, but that will then create a situation where we see drastic uncertainty for even longer, namely until these elections have taken place. Today, for example, there was a statement from one of the big economic think tanks here in Germany and their leader said that he personally preferred a minority government simply because examples in Canada or the Netherlands had shown that those could work fine and might actually produce more stability than the situation we would face if there were to be a new election. The situation at the moment is open. We don’t know how it’s going to pan out. And there’s still just enormous amounts of uncertainty.