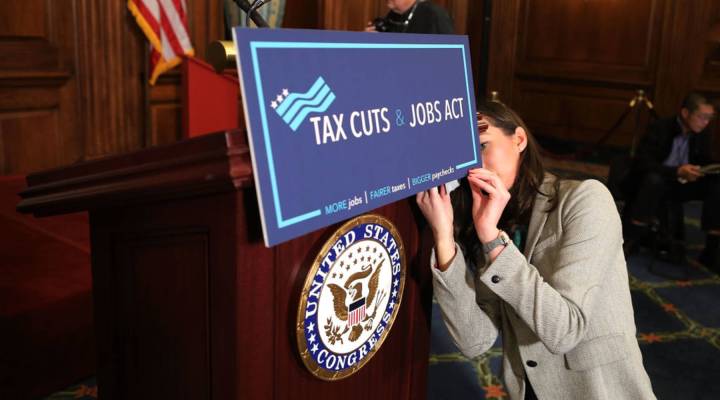 Today the House passed its version of the tax bill. It has yet to be voted on in the Senate. To get a sense of how the bill could affect people in the economy Kai sat down with Ed Fryar, owner of the growing business Ozark Mountain Poultry.  Below is an edited version of their conversation.

Kai Ryssdal: First of all, how’s the chicken business doing?

Ed Fryar: The chicken business is good. We’ve had a very good year. Not just us, but the industry as a whole has had a good year. So, that’s always good news.

Ryssdal: Fair enough. One of the reasons we called you obviously is because you are a businessman, but also as we have talked about before, you are a trained economist, and so I imagine you’ve been following this tax news pretty closely, yeah?

Ryssdal: Well talk about that for a little while. What are the things you are most interested in in this bill?

Fryar: Pass-through taxes. To me it starts and stops with that. Our company is set up as an S-corp and two LLCs. The companies don’t pay the taxes. As an individual all of that income passes through to me and my partners and we’re paying at a rate of 39.6 percent right now.

Ryssdal: Right, [which is the] top individual rate and if that pass through rate goes down to 25, that’s a good thing for you, right?

Fryar: Yeah that’s a great thing for us. Yes. We had a major expansion a couple of years ago and any time you grow it takes cash and it takes debt. We used up our cash. We acquired a fair amount of debt. We’re in the process of paying that back down. Right now under the current tax law we’re probably two to three years away from being able to expand again. I just ran some quick numbers, if it goes down to 25 percent we are maybe a little over a year away from being able to expand again.

Ryssdal: And you’ve got to grow or die, right?

Fryar: We’re a growth company. We opened up in April of 2001. We had 25 employees, we have about 1700 employees now. But the growth doesn’t happen 100 employees every year. It’s lumpy.

Ryssdal: What are you going to do with the money that you’re saving by not paying that extra 15, or whatever it is, percent in taxes?

Fryar: We’ll use that money to pay our debt down sooner to a level we feel comfortable with. As soon as we do that then we’ll have another expansion.

Fryar: That’s right, yeah. All of that. Our next expansion will probably be, I would guess, anywhere from 500 to 800 employees.

Ryssdal: That’s a lot, especially I imagine in a place like Rogers, Arkansas.

Fryar: We won’t to expand in Rogers. I think we’ve reached our capacity here. We will expand somewhere—I will say within a four-state area of where we are right now.

Ryssdal: Gotcha. As you look forward though to the Senate prospects for this thing that is near and dear to your heart, how’re you feeling?

Fryar: Yes, I mean you’re getting into politics now. I have no clue. The only thing that concerns me, and I’ve been trying to find information about it on the Internet today, Senator Johnson came out and said that he was opposed to it in the Senate because of the way it was handling pass-through taxes. I don’t know if the Senate version has changed the 25 percent to another number or if they’re doing something else. If it’s 25 percent, you know I mean obviously I would like 22 and a half percent or 20 percent or 15 percent more than 25, but if it’s 25 percent I’m in.

Ryssdal: Interesting. In essence this whole trickle -own thing that the White House is talking about works for you. That’s the thing that’s making this work?

Fryar: Yes. I mean, we’re we’re a growth company. We have been ever since we first opened our doors, and it takes cash to grow. That’s the way we’ve done it, and so that’s what’s funded our growth. The higher the taxes that we pay, the less retained earnings that we have, so the slower growth rate and likewise if you reduce the taxes the faster the growth rate.