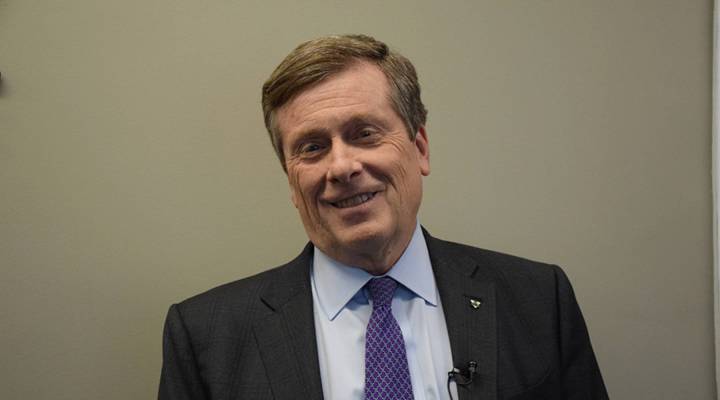 Not all tech is in Silicon Valley. Many cities around the world are trying to grow their own industries. Recently, the city of Toronto partnered with Sidewalk Labs, a subsidiary of Alphabet, to build a billion-dollar mini smart city on its waterfront. Marketplace Tech host Molly Wood spoke with Mayor John Tory while he was in New York looking to increase tech investments. Below is an edited transcript of their conversation.

Molly Wood: How local is the local tech economy doing?

John Tory: Two or three years ago I would have said there wasn’t a big enough investment community, locally, to fund the startups. But what’s happened is that investment community has stepped up. This has also encouraged more startups to stay and grow in Toronto, as opposed to the previous pattern, which was that startups across the region would sell out once they reached a certain stage because they just couldn’t scale up. And I think one final thing, which is attracting talent from around the globe: Canada is a very pro-immigration country. And this has contrasted with other countries that seem to be turning inward. We have, for example, established a talent visa that says for highly talented people in the tech field that are needed by growing technology companies, we will turn around a visa for them in a matter of weeks so we can get the best and the brightest people to come to Canada. And this is in contrast to what’s going on in some other places in the world.

Wood: And one development that you announced last month is that Sidewalk Labs, a subsidiary of Alphabet, formerly known as Google, will pilot the redevelopment of 12 acres on Toronto’s waterfront. Can you tell us about that project and how much Sidewalk Labs will drive that development?

Tory: Well, they’re going to drive it a lot, that’s the whole idea. We had a competition to see who would be best to come in and develop that piece of land. What they’re going to bring to this is a whole series of innovations that we hope will turn Toronto into a center for urban innovation that people from around the world can come and see. But it relates to everything from mobility and how we can get people around to how to construct affordable housing in a more affordable and efficient manner, and a whole host of other things in between.

Wood: Although some of the trade-off, of course, is data. In this redevelopment there will be sensors everywhere, sucking up information from noise to air quality to maybe traffic, energy usage. Are you or any of the citizens of Toronto nervous about giving that much information to a corporate entity, especially as there’s growing suspicion about these companies and their size and power?

Tory: I think nervous would be the wrong word because that implies that there’s some suspicion we have that people are doing bad things. I think what we have to be, all of us, in every area of life if you think about it, is just mindful.

Wood: Are there privacy protections built into this agreement from the city side?

Tory: The agreement hasn’t been finalized just yet. But we have, what was described to me yesterday and from an American perspective as privacy laws that are among the higher end in the Western world. And so I think that those are constantly being reviewed, and the contract will obviously set out what can and can’t be done with data and who owns it and so forth. And I’m sure there will be adequate protections built into the contract that the public in the Toronto region would expect.

Correction (Nov. 16, 2017): An earlier version of this story misstated the number of acres to be redeveloped in Toronto. The text has been corrected.