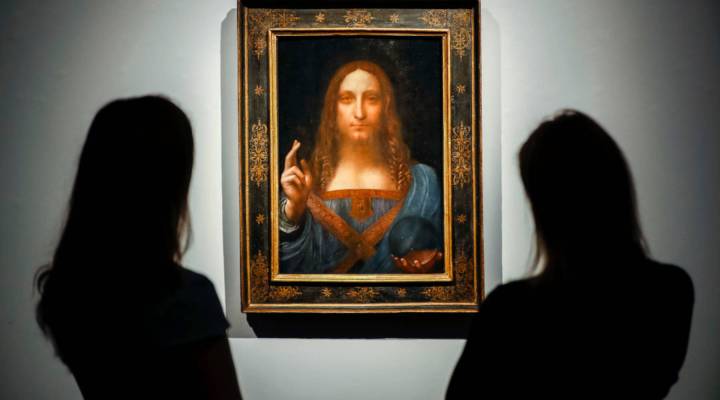 COPY
A view of Leonardo da Vinci's Salvator Mundi, which could rake in more than $100 million tonight at auction. TOLGA AKMEN/AFP/Getty Images

A view of Leonardo da Vinci's Salvator Mundi, which could rake in more than $100 million tonight at auction. TOLGA AKMEN/AFP/Getty Images
Listen Now

The auction house Christie’s is putting the last Leonardo Da Vinci painting in private hands up for sale. It’s an ethereal image of Jesus called “Salvator Mundi,” translated as “Savior of the World.” The 500-year-old painting, which had to be heavily restored, could sell tonight for more than $100 million.

But according to art critic and New York Times contributor Blake Gopnik, this particular painting may be a Leonardo “in theory” only.

Gopnik spoke with Marketplace Morning Report host David Brancaccio about the public’s love of high-priced art, why asking if the painting is actually by Leonardo might not be the right question, and the pressure art historians have to attribute unknown works of art to famous artists. Below is an edited transcript of their conversation.

Blake Gopnik: We love the idea that something might sell for $100 million, $150 million, $200 million. We just can’t do without those kind of numbers. That’s what really interests us. Forget art. What we want is big, big price tags.

David Brancaccio: Now you start out by saying “in theory.” There’s some doubt in your mind?

Gopnik: I saw it on Saturday. I went there with an eminent Renaissance art historian friend of mine, and we looked and looked at it and there are things in it that look very much like Leonardo. You could argue that there are too many things that look like Leonardo. It’s a kind of compendium of Leonardo-isms and if you were a pupil of Leonardo, what would you do? You would say, “Oh right, Leonardo. The boss. He likes sfumato. He likes extreme perspectival effects.” And you’d sort of add those all to a very conservative picture.

No, I’m not saying that this isn’t Leonardo. I’m also not saying that it is a Leonardo. I’m actually saying that it’s a kind of incoherent question to ask. It’s kind of like asking, “Is the moon Jewish or is the sun gay?” Pictures, even today, let alone in the 16th century can be all sorts of things between being by a great master and being by some assortment of assistance. I am perfectly happy — I think it’s way more interesting to say, you know, “This is a funny, interesting picture that might be by Leonardo.” It’s Leonard-ish, is what I’d say. And I’m interested in that category that Leonardo helped create. But that’s not what the market wants. The market wants yes or no answers to these questions.

Brancaccio: I was looking into the history also, and this painting sold in 1958 for 45 British pounds sterling. If you do the math that’s about $1,000 in modern money. That was a steal, but it was in 1958, before “Mona Lisa” had gone on tour in the U.S. So of course it was only a grand.

Gopnik: This actually reminds me of a story that I recently heard, except it’s not just a story, it happens to be true. I know of an art historian who was asked to authenticate a work by Leonardo, and he was gonna, you know, charge the normal kind of fee charged for doing this kind of thing — a low six figures. And the owner said, “No, no, no. We want to pay you a percentage of what it sells for.” Now, what is the chance that any art historian given that particular contract is gonna say, “Oh no, it’s not by a famous artist. It’s by Joe Blow and it will sell for a thousand bucks”? The impetus to attribute these works to very famous artists who get very famous prices is overwhelming in the market and it’s actually corrupting the way we think about authorship. It’s really messing with us.

Update: Gopnik corrected his earlier estimate of an authentication fee via Twitter.

CORRECTION to my Marketplace piece on $100M Leonardo!!!: A standard fee for authentication might be low FOUR figures, not SIX! (Yet another art historian who flunked arithmetic…) 3:45 into https://t.co/yDMC5acvZY