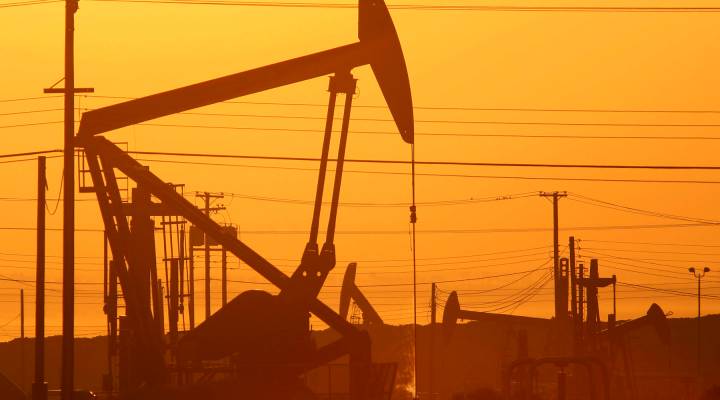 We’re about a decade into an oil and gas revolution known shorthand as fracking. It relies on shooting high-pressure water mixed with chemicals down into layers of rock to crack the stone and release oil and gas. Pretty much since the fracking boom began, people who live near these wells have worried about chemicals getting into their water and making them sick.

A new set of documents shared with Marketplace by the Partnership for Policy Integrity from the Environmental Protection Agency shows that the agency has previously undisclosed health concerns that some fracking chemicals might cause things like liver poisoning and tumors.

Bryan Latkanich makes his home in the rural hills of Pennsylvania, smack in the middle of the largest natural gas region of the country known as the Marcellus Shale. Latkanich sold the rights to drill on his property in 2010. Chevron then acquired those rights in 2011.

Latkanich thinks fracking chemicals polluted his water well and made his family sick. Four years ago, when his son, Ryan, 7, was in the bathtub, Latkanich said, “His mother screams upstairs like bloody murder. Something is wrong with Ryan! And he came out with rashes that were beyond poison ivy or oak.”

Latkanich thinks fracking chemicals that were shot down the gas well and came back up were stored in a pit on his property that wasn’t lined — as it was supposed to be — to prevent leaking. Latkanich brought out photos that he said show a crumpled liner on the edge of a pit still full of water. He said maybe the liner was pulled out. Latkanich said he took the photos December 15 or 16, 2012. Chevron denies that, saying it removed the wastewater and the liner in the summer of 2012. That’s months before Latkanich said he took his photos.

State oversight of fracking wastewater from 2009 to 2012 came under criticism from the Pennsylvania Auditor General. In a 2014 report that office said the state’s Department of Environmental Protection “monitors shale waste with self-reported data that is neither verified nor quality controlled for accuracy and reliability.”

Since the bath that led to his son’s rash, Latkanich said the boy has been diagnosed with asthma and suffered incontinence, “defecating himself almost on a daily basis from just the use of this water, apparently.”

Latkanich himself has been diagnosed with neuropathy, a kind of nerve damage that causes him joint pain.

The family started buying bottled water to use for everything.

Latkanich has struggled to get answers to his medical problems. The state tested his water and declared it safe. Local hospital tests on Ryan found nothing wrong. But other tests by universities on the family’s water found high levels of bromide, chloride, manganese, uranium — all compounds associated with fracking chemicals.

You hear a lot of health complaints like these — and confusion about them — in communities near the oil and gas fields of America.

Pennsylvania residents alone filed 9,000 complaints about drilling pollution and well problems from 2004 to 2016, according to the investigative news site Public Herald. That’s one complaint for every well drilled. Federal scientists have concluded that oil and gas production can pollute water in several ways.

Though it’s hard to prove cause and effect between a chemical and illness, Western Pennsylvania pediatrician Edward Ketyer fears a crisis in the making.

“A lot of the harmful effects occur many years after the exposure,” he said. “A good example would be asbestos. Many years later shown to cause mesothelioma. By the time the association is made, it’s too late for many, many people.”

Several published studies have found less-direct medial correlations. In Colorado, the closer you live to a well, the higher your cancer risk. In Pennsylvania, the greater the chance of low birth-weight babies. Ketyer said children are particularly at risk.

“They play in the dirt, they play in streams. They don’t necessarily wash their hands before they eat,” he said. “I mean, they come in pretty close contact to the dark and dirty around us.”

All these concerns raise the question: Where are the regulators?

The EPA approves new chemicals, and it turns out the agency greenlit more than 40 drilling and fracking chemicals with known risks from 2003 to 2014.

What risks? Agency documents list poisoning of the brain, lungs and liver; tumors; poor development in infants and fetuses.

Some fracking chemicals cause adverse health effects, including the poisoning of the brain, lungs and liver. Here are some of the wells where chemicals were used and the related health effects.

Source: EPA documents released to the Partnership for Policy Integrity

Those are the findings from hundreds of new documents released under the Freedom of Information Act to the environmental group Partnership for Policy Integrity.

“It’s troubling to read these documents and see EPA say, ‘We think this chemical could be neurotoxic and this other chemical could have developmental toxicity,’ and then approve these chemicals for use with very light regulation, if any,” said Dusty Horwitt, an investigator with the group.

The documents analyzed include chemical manufacturers’ applications for government approval and the EPA health risk assessments. The EPA can go back and ask companies to do chemical safety tests. But for all the drilling and fracking chemicals approved, it requested testing less than 10 percent of the time, according to Horwitt’s analysis of the documents.

So who is testing for safety?

Horwitt said in many cases, no one is.

“The companies tell EPA that they don’t have health testing information on the chemicals on a regular basis,” he said. “EPA regularly does not ask for health testing data. The EPA and the public are, to a large degree, operating in the dark.”

Congress’s watchdog arm, the Government Accountability Office, has also repeatedly found that the EPA does not have enough data to check chemical risks thoroughly.

The EPA did not respond to questions about its approval of fracking chemicals, despite the agency’s knowledge of the risks.

Yet those old chemicals are still out there, in and around Bryan Latkanich’s house in Pennsylvania.

It’s not just the pollution he believes is all around. He has a separate beef with the system: He’s not allowed to know what the exact chemicals are that he may have been exposed to.

Correction (November 20, 2017):  This version of the story eliminates a statement that Pennsylvania cited Chevron for dumping frack water on Latkanich’s property; the citation concerned Chevron’s pumping of rainwater.  This story has also been updated to include Chevron’s position on whether Latkanich’s wastewater pit was lined, and when the liner was removed.  Also, the original version of this story incorrectly reported that Latkanich sold land rights to Chevron; Latkanich sold those rights to another company — rights which Chevron later acquired.